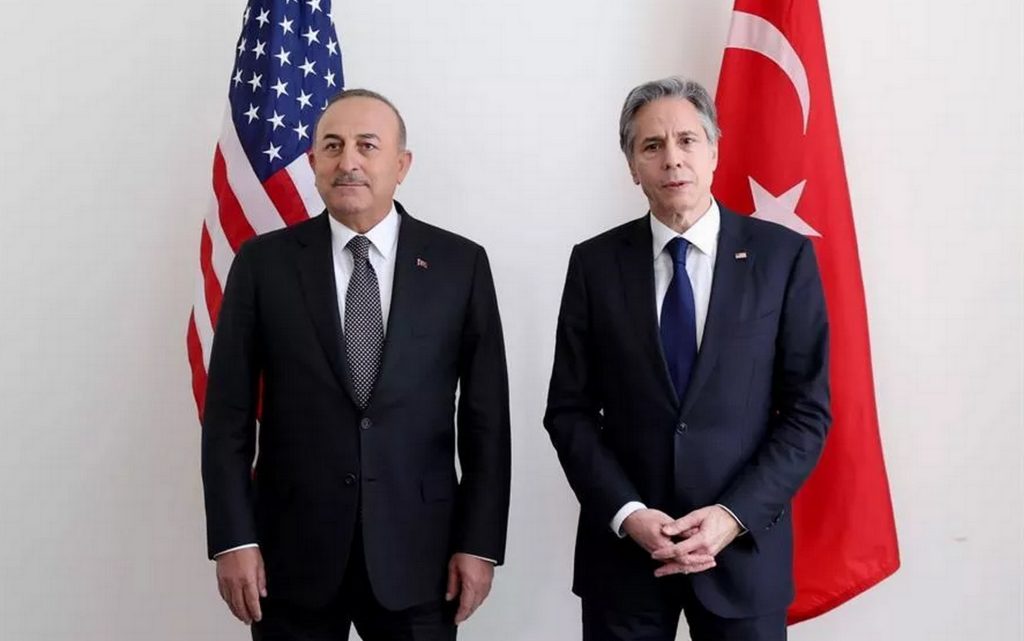 Türkiye urged the US administration to be decisive regarding its push to sell F16 fighter jets to Ankara and persuade the Congress to drop its opposition to a planned $20 billion deal.

The Turkish Foreign Minister Mevlut Cavusoglu told reporters in Washington that he told his US counterpart Antony Blinken that Ankara’s dropping its objection to Sweden and Finland joining NATO shouldn’t be a precondition for selling F16 fighters.

“What is important here is whether the administration will be decisive or not… If it shows a strong position against any steps to prevent this, the problem will be resolved,” Cavusoglu said after his meeting with Blinken.

The Biden administration expressed its support for the sale of aircraft to Türkiye, despite congressional opposition due to Ankara’s controversial human rights record and its policy towards Syria, as part of the administration’s efforts to preserve NATO unity in the face of the Russian invasion of Ukraine.

However, the US Congress strongly objected the deal.

“The administration shouldn’t waste such an important deal between two allies just because one person or a few people object to it… You shouldn’t acquiesce” Cavusoglu said.

“The repeated attacks by Turkish President Recep Tayyip Erdogan on our Syrian Kurdish allies and continued rapprochement with Russia, including the delay in membership of Sweden and Finland in NATO, remain serious causes for concern,” Democrat Senator Chris Van Hollen said in a statement.

“As I said before, for Türkiye to take delivery of the F16s, we need assurances that these concerns will be addressed,” he added.

The two Scandinavian countries applied for membership in the alliance last year after Russia’s invasion of Ukraine, but the two applications, which Türkiye and Hungary haven’t yet ratified, must be approved by all 30 members of the alliance.

The Turkish government said, that Sweden in particular should first take a clearer stance against these groups, particularly Kurdish militants and a group it blames for the 2016 coup attempt.

During his meeting with Blinken, Cavusoglu said that Ankara’s approval of the two countries’ request to join NATO wasn’t set as a precondition, but he stated that the American side made it clear that Congress would consider it a positive thing.

Cavusoglu added that Ankara doesn’t deny that the two countries have taken steps to address its security concerns, but there is more they should do and they are aware of this.

There was a hiatus in relations between the United States and Türkiye after Ankara purchased Russian missile defense systems in 2019.

Cavusoglu and Blinken have met several times in the past at NATO summits and United Nations meetings, however, the Biden administration’s invitation to the Turkish minister for an official visit took nearly two years… a delay that analysts say reflects strained relations.

The United States has commended Türkiye for some of its actions during the Ukraine war, including mediating the grain corridor talks, but Washington is also concerned about Ankara’s deepening ties with Moscow.

The two countries also disagree about the Turkish desire to carry out a military operation in Syria and its intention to normalize relations with Damascus.

For its part, Ankara calls on Washington not to support the Syrian Kurdish armed factions, which it considers terrorist.

Also, the tensions over the Aegean Sea between Türkiye and Greece, also a NATO member, have negatively affected sentiment in the US Congress toward Ankara.

Last week, the US State Department informally notified the committees that oversee arms sales in the Senate and House of Representatives of its intention to proceed with the sale.

But a senior administration official said Washington would likely not move forward with the sale unless Menendez backed down from his opposition.

It’s true that Congress can block arms sales abroad, but it has never been able to muster the two-thirds majority in both houses required to override a presidential Veto.

The Turkish Foreign Minister said that the US side didn’t set a date for sending the official notification regarding the F16 fighters to Congress.