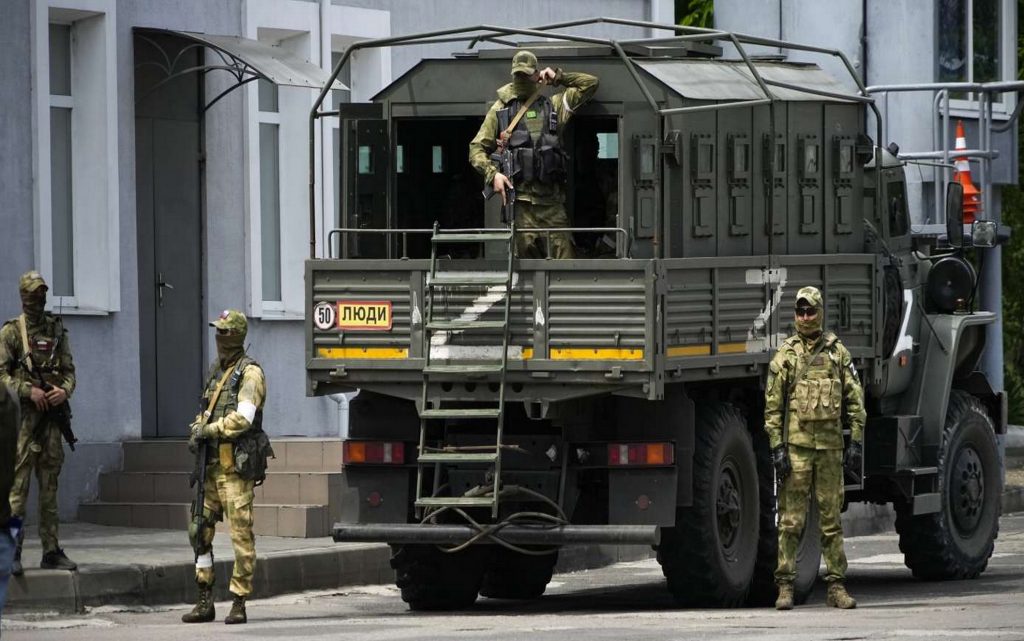 It is, then, the third setback for the Russian army within two months.

After his withdrawal from the cities of Izyum and Krasny Lyman, the new setback was the decision to withdraw from Kherson.

A decision attributed by the commander of the Russian forces in Ukraine, Sergey Surovkin, among other reasons, to the difficulty of providing supplies to the soldiers, as well as the effectiveness of the US weapons that were supplied to the Ukrainian forces.

Despite the decision to withdraw, Russian experts are convinced that the return to Kherson will be very close, while Kyiv, for its part, confirms that the situation after the restoration of the city is not the same as before, as it is the key to the entire southern region, which will allow it to “target the main supply routes for the Russian forces, and cutting off water again from the Crimean peninsula”.

The Russian forces completed the transfer of their soldiers from the western bank of the Dnieper River to the other bank, with the withdrawal of more than 30,000 soldiers and about five thousand units of weapons and military equipment, and the establishment of defense lines along the river.

The Russian withdrawal from Kherson came based on a recommendation made by the commander of the Russian forces in Ukraine, Sergei Surovkin, to the Russian Minister of Defense, Sergei Shoigu, which the former attributed, in particular, to preserving the lives of the military and combat capabilities, as well as strengthening the defense line on the left bank of the river.

While Surovkin acknowledged that the decision to withdraw from Kherson was difficult, he stressed that it had benefits for the Russian forces, by redeploying them “in offensive operations on other axes”.

Surovkin paved the way for the decision to withdraw in his first press interview after assuming his position as commander of the Russian forces in Ukraine about a month ago, when he indicated the need to take “important and difficult decisions” regarding Kherson, which Kyiv interpreted, at the time, as a decision to withdraw from the city.

Especially since it was accompanied by a large evacuation of the pro-Moscow population, amid the Ukrainian military build-up, as information indicates that Kyiv mobilized about 60,000 soldiers to restore the city, which fell to Russian forces on March 14, with the start of the war.

Starting last August, the Ukrainian forces succeeded in advancing in Kherson Province, especially on the right bank of the Dnieper River, in the Kherson and Nikolaev regions.

Despite this progress, the Russian forces succeeded in stopping the attack and inflicting heavy losses on the Ukrainian forces, but they were later forced to decide to withdraw.

The Kremlin confirmed that Kherson is an entity of the Russian Federation, and that this matter will not change.

In this context, the military analyst in the Russian Izvestia newspaper, Anton Lavrov, explained that “the increasing complexity of providing Russian forces with equipment, weapons and food has become a major problem,” noting that “since the beginning of the special operation, the forces and the local population on the right bank had three lines of communication”.

Only with the rest of Russia across the Dnieper: the Antonovsky Bridge in Kherson, the railways, and the dam of the Kakhovskaya hydroelectric power station”.

He added that despite all attempts, during the past months, “the Ukrainian forces were unable to block these roads, but the situation changed with the receipt of long-range, high-precision projectiles and missiles, which changed the field scene, and its first features were what happened in the battle of Zmini Island in the end of June, when the Russian forces were forced to withdraw from it.

According to Anton Lavrov, the available air defense systems haven’t succeeded in intercepting the Ukrainian missiles so far, which was acknowledged by Surovkin himself, saying that the missile problem hasn’t been fully resolved, as despite all the measures taken by the Russian forces, only about 20% of the missiles, the router reaches its goals.

In addition to the foregoing, since last September, the Ukrainian forces have begun to use the 155 mm M982A1 Excalibur shells that they obtained from the Pentagon, which have been corrected by GPS, and this ammunition is generally impossible to intercept by Air defense systems, according to military analyst Anton Lavrov.

Anton Lavrov pointed out that the Ukrainian forces “succeeded in disrupting the movement of the bridge and the railway plans leading to Kherson, and they could also stop the movement by damming the Kakhovskaya station, and the port of Kherson was subjected to missile attacks”.

Despite the great moral blow to the image of the Russian army after the decision to withdraw from Kherson, Russian experts unanimously agreed that the decision was necessary with the approach of winter, with what this means of the difficulty in securing equipment and food for the soldiers on the right bank of the Dnieper River, especially since if Moscow resorted to redeploy in the region, it would have put its soldiers in the face of their fate if Kyiv had proceeded to strike the Kakhovskaya station dam, which would mean the flooding of the entire region.

There is an impression among Russian experts that the battle of Kherson hasn’t yet ended, but rather has been postponed to a later stage in which the situation of the Russian army has improved with the arrival of the new forces enrolled after the recent mobilization process, in addition to the receipt of these forces of the new weapons promised by the former head of the RosCosmos foundation, Dmitry Rogozin, that would ensure victory for Russia.

While Russian experts downplayed the step of withdrawing from Kherson, Ukrainian analysts confirmed that regaining control of the city, which is the key to the entire southern region, will allow Kiev to target the main supply routes for Russian forces, and the Russians will try to maintain control over them by all means.