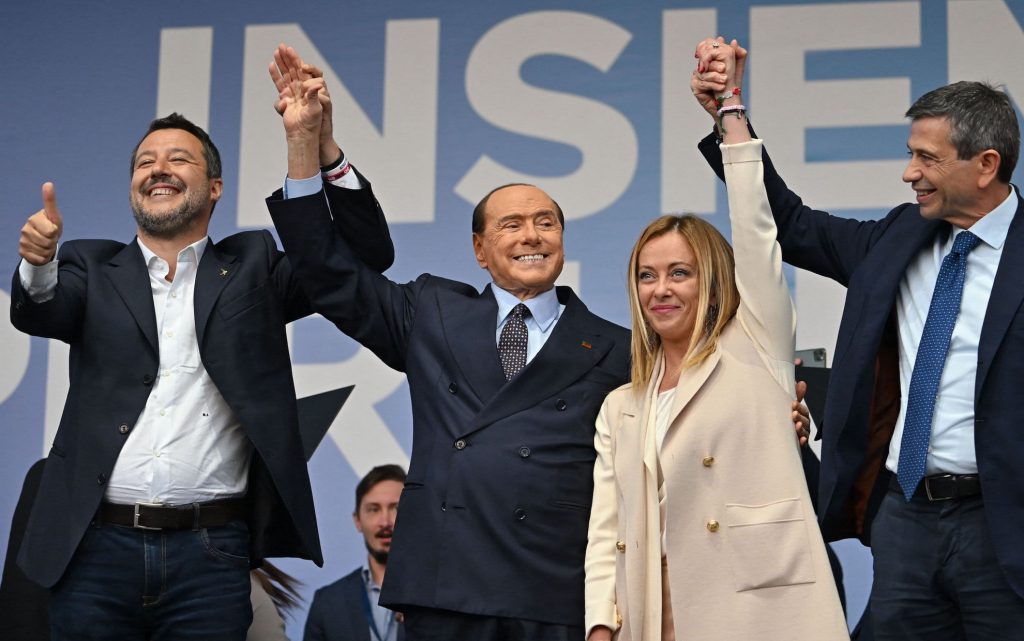 After Sweden, the far-right made a new breakthrough in Europe, with the victory of Giorgia Meloni in Sunday’s legislative elections in Italy, where a neo-fascist party will have a chance to rule the country for the first time since 1945 year.

After remaining in the ranks of the opposition in all successive governments since the legislative elections in 2018, the Fratelli d’Italia party has established itself as a major alternative, and its share of the vote has moved from 4.3% four years ago to about a quarter of the vote (between 22 and 26%), according to exit polls.

From the polling stations Sunday, to become the leading party in the country.

The party’s alliance with the far-right League led by Matteo Salvini and the conservative Forza Italia party led by Silvio Berlusconi is expected to win up to 47% of the vote.

With the complex game of constituencies, this alliance is supposed to secure the majority of seats in the House and Senate.

Giorgia Meloni, leader of the nationalist Fratelli d’Italia (Brothers of Italy) party, said Italy had chosen her party, and it would not let her down.

The Italian news agency “Nova” reported, Monday, that Meloni said, in the first comment on the victory from the Barco dei Principe hotel, the headquarters of her party’s election campaign: “I think we can say that the Italians have sent a clear signal to the center-right government led by Fratelli d’Italia… He’ll be able to the Italians are finally able to form a government that exceeds their signals at the polls”.

Meloni deplored the statements about the abstention.

“If we are asked to govern, we will do so for the sake of all Italians, seeking unification, not division,” she added.

Meloni thanked her coalition partners: “I thank Matteo Salvini, Silvio Berlusconi, Maurizio Lupi and the entire centre-right coalition… We have all worked hard to achieve this goal”.

According to the preliminary results announced by the SFG polling company, the votes won by the center-right reached 43.9%, the center-left 26.5%, the Five Star Movement 15%, the “Azioni” (Labor) and “Viva Italy” (Long live Italy) 7.7%.

As for the parties, the Brothers of Italy received 26.4% of the vote, followed by the Democratic Party with 19.3%, La Liga (the League) with 8%, and Forza Italia with 8%.

As the leader of the most powerful party, Georgia Meloni could lead the next government, becoming the first woman to hold this position in Italy.

This will constitute a real earthquake in Italy, one of the founding countries of Europe and the third economic power in the Eurozone, but also in the European Union, which will have to deal with the politician close to the Hungarian Prime Minister Viktor Orban.

In this context, European Commission President Ursula von der Leyen noted that the EU has “tools” to punish member states that violate the rule of law and its common values.

“In Europe, they are all worried to see Meloni in government… Celebration is over,” she added… Italy will begin to defend its national interests”.

For his part, the head of the anti-immigrant League, Matteo Salvini, told reporters as he headed to the vote that his party would be “on the podium of winners: first, second, and in the worst case, third”.

Meloni, a former admirer of Mussolini and whose slogan “God is the homeland, the family”, succeeded in making her party accepted as a political force and raising issues that emulate the discontent and frustration of its citizens by remaining in the opposition, while other parties supported the national unity government led by Mario Draghi.

Whatever government emerges from the elections to assume its duties from the end of October, it is already facing obstacles on its way.

They will have to tackle the crisis caused by the sharp rise in prices at a time when Italy faces a debt of 150% of its GDP, the highest in the Eurozone after Greece.

In this context, Italy is in dire need of the continuation of the aid distributed by the European Union within the framework of its plan for economic recovery after Covid-19, of which this country is the first beneficiary by a large difference from other countries.

“Italy cannot allow itself to dispense with these sums of money,” historian Mark Lazar told AFP, noting that “the margin of action in front of Meloni is very limited” on the economic front.

On the other hand, it can side with Warsaw and Budapest in their battle with Brussels “on questions of defending the national interest against European interests”.

As did the French far-right leader Marine Le Pen before her, Meloni eventually abandoned her project to leave the euro, but she calls for a “review of the rules of the Stability Pact” suspended due to the health crisis, which sets the ceiling on the budget deficit and debt of countries at 3% and 60%, respectively its gross domestic product.

On social issues, Meloni, who comes from Rome, adopts ultra-conservative positions, and she declared in June, “Yes to the normal family, no to the LGBT lobby! Yes to gender identity, no to gender ideology! ”

Its rise to power will also lead to the closure of the borders of a country whose shores arrive annually by tens of thousands of migrants, which raises the fears of non-governmental organizations that secretly help migrants crossing the sea in rickety boats to escape misery in Africa.

Experts already agree that such a coalition government in which Meloni will face a real challenge in dealing with confusing allies, whether Silvio Berlusconi or Matteo Salvini, will not last long in a country known for its lack of government stability.

French Prime Minister Elisabeth Borne told RMC radio that she did not want to comment on the democratic choices of the Italian people, but wanted to stress that the European Union has specific values ​​that it adheres to, such as human rights.

Bourne’s comments come after Italian elections that appear to pave the way for Georgia Meloni to become the first woman to head the government in Italy, the country’s most right-wing government since World War II, after her conservative coalition won Sunday’s general election.

For its part, the Kremlin announced on Monday its readiness to develop “constructive” relations with Rome, after the victory of far-right leader Georgia Meloni in the elections in Italy.

Kremlin spokesman Dmitry Peskov told reporters, when asked about Meloni’s victory, “We’re ready to receive any political forces capable of transcending the prevailing trend charged with hatred for our country… and expressing a desire to be constructive in relations with our country”.

For his part, US Secretary of State Antony Blinken announced Monday that his country looks forward to working with the new Italian government in the wake of the far-right’s victory in the general elections, but he stressed the need to respect human rights.

“We’re keen to work with the Government of Italy on our common goals: supporting a free and independent Ukraine, respecting human rights and building a sustainable economic future,” Blinken Twitted.

French President Emmanuel Macron said Monday that he respected the “democratic choice” of Italians that led to the victory of the far-right in the general elections, calling on Rome to “continue cooperation” with the Europeans.

“The Italian people made a democratic and sovereign choice,” he said in a speech published by the Elysee Palace…We respect him,” adding, “As neighbors and friends, we must continue to cooperate”.