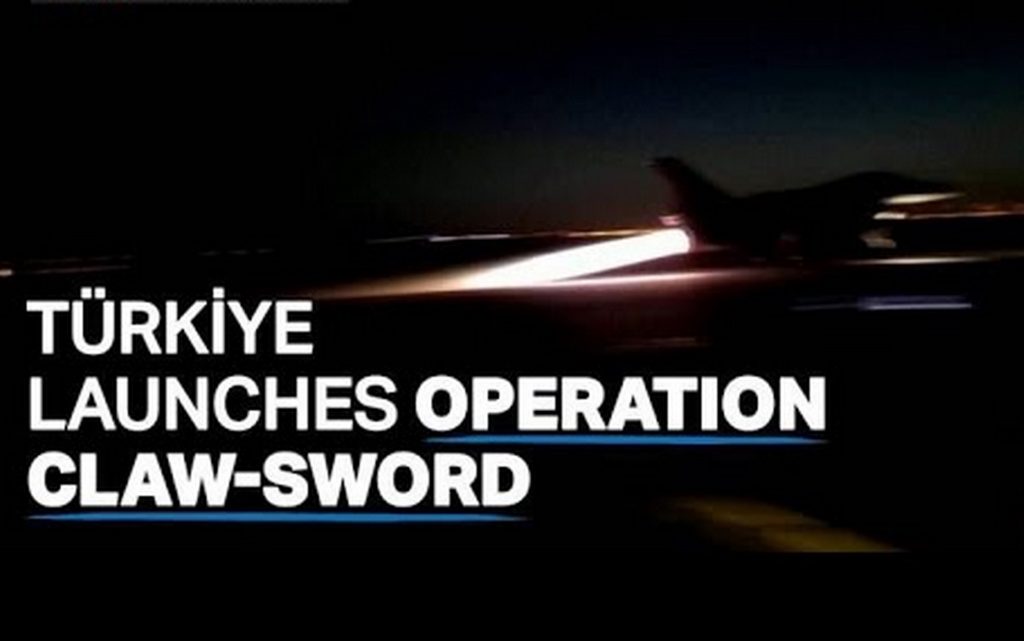 Russian news agencies said on Tuesday, quoting Moscow’s envoy to Syria, that Russia calls on Türkiye to show restraint and refrain from using excessive military force in Syria, and to prevent an escalation of tension.

“We’ll call on our Turkish colleagues to show a measure of restraint in order to prevent an escalation of tension, not only in the northern and northeastern regions of Syria, but throughout the region,” Russian RIA news agency quoted the Russian envoy Alexander Lavrentiev as saying.

Turkish warplanes carried out strikes in Syria and Iraq on Sunday, destroying 89 targets linked to the outlawed Kurdistan Workers Party (PKK) and the People’s Protection Units (YPG), which Ankara says is an offshoot of the PKK.

Lavrentiev said that Türkiye didn’t inform Russia in advance of its strikes on Syria and Iraq.

“We hope to convince our Turkish partners to refrain from using excessive force on Syrian soil,” he added.

He said Russia would work with the parties concerned to find a peaceful solution to the Kurdish issue.

The Russian TASS news agency reported that Lavrentiev said that the withdrawal of US force from northeastern Syria would contribute to stabilizing the situation.

In addition, a spokesman for the US State Department said on Monday that the United States opposes any military action that destabilizes the situation in Syria, adding that Washington has informed Ankara of its serious concerns about the impact of such an attack on the goal of fighting the Islamic State.

“We’ve asked Türkiye not to conduct such operations, just as we have asked our Syrian partners not to launch attacks or escalate,” US State Department spokesperson said in emailed responses to questions.

“We continue to oppose any military action that destabilizes the situation in Syria or violates Iraq’s sovereignty through military actions that aren’t coordinated with the Iraqi government”.

The spokesman added, “We also oppose the recent attacks in southern Türkiye, which reportedly resulted in the death of several civilians”.

In the same context, French Foreign Minister Catherine Colonna, on Monday, expressed concerns about the air strikes launched by Türkiye on the night of Saturday-Sunday against Kurdish sites in Syria and Iraq, calling on Ankara to restraint.

“Unfortunately, this is not the first time we see Türkiye launching attacks in a foreign country,” Colonna said on the sidelines of an international conference in support of Moldova.

“Every time we expressed our concern and our clear desire for Türkiye to show greater restraint,” she added.

And she added, “We understand this security concern of Türkiye in the face of terrorism, but not with this kind of means and this type of method”.

Türkiye said Kurdish militia killed two people in missile strikes from northern Syria on Monday, stepping up cross-border vendettas following Turkish air strikes over the weekend and a bomb attack in Istanbul a week ago.

The Turkish armed forces said they were responding to the attack, and a senior security official told Reuters that Turkish planes had again begun bombing targets in northern Syria.

In the latest of a series of revenge attacks, Turkish Interior Minister Suleyman Soylu said several rockets hit a border neighborhood in Gaziantep province, killing a child and a teacher and wounding six.

Soylu later said that a pregnant woman, who was initially reported to have been killed, was seriously injured and was receiving hospital care.

CNN Turk said the missiles were launched from the Syrian region of Ain Arab (Kobani), which is controlled by the YPG.

Turkish warplanes have already launched air strikes on Kurdish militia bases in Syria and Iraq on Sunday, destroying 89 targets of the Kurdistan Workers’ Party (PKK) and the People’s Protection Units (YPG), which Ankara says is a wing of the PKK.

The Turkish Defense Ministry said in a statement that 184 militants were killed in operations on Sunday and Monday.

It added that the operations included air strikes and ground weapons.

Türkiye said the military operations that took place over the weekend were in response to a bomb attack in Istanbul a week ago that killed six people.

The PKK and the Kurdish-led Syria Democratic Forces, which includes the Kurdish YPG militia, have denied involvement in the November 13 bombing in a densely populated neighborhood.

The United States allied itself with the Syria Democratic Forces in its fight against the Islamic State in Syria, causing a deep and long-standing rift with NATO member Türkiye.

Türkiye launched its limited air military operation a week after an improvised explosive device attack in Istanbul killed six people and wounded more than 80 others, and Ankara accused both the PKK and the Kurdish People’s Protection Units of standing behind it.

However, both parties denied any role in the attack.