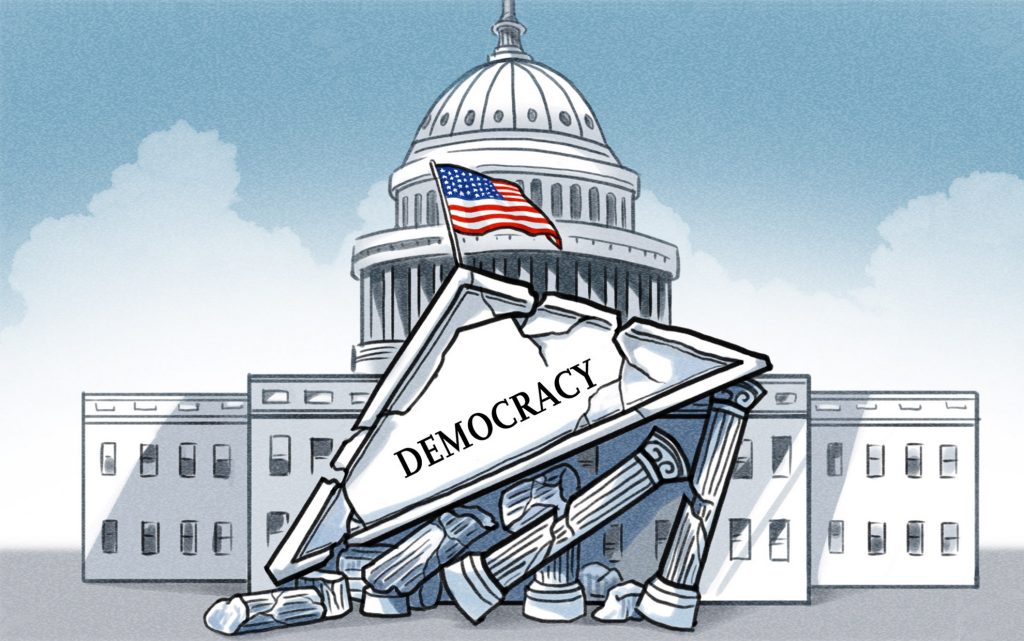 Bruce Stokes, a researcher at the German Marshall Fund, wrote an article in the Foreign Affairs magazine that dealt with the reality of the United States, the decline of its global leadership and its democratic image globally.

Stokes said that US global leadership is facing a crisis, not about economic vitality, diplomatic prowess, or military might, but about legitimacy.

Across the world, polls and interviews show that audiences and elites in countries that consider themselves allies of the United States have doubts about the state and direction of American democracy.

They no longer see it as a model, and they worry about whether the American political system can still produce credible results.

Behind the ever fluctuating popularity of US presidents, there is a steady decline in the international assessment of the strength of the US political system.

If people around the world can no longer count on American democracy to lead by example and to take decisive American action on common challenges, Washington will lose its moral authority over global leadership.

Americans feel they are losing their standing, over the past two decades, nearly two-thirds of Americans have thought the United States is less respected internationally than it was in the past, according to a Pew Research Center survey.

This respect is likely to deteriorate further.

To regain this lost standing, American democracy must overcome the challenges of partisan politics, institutional inertia, and instability.

The US government will need to demonstrate its ability to produce sustainable international policies that, US friends and foes alike can count on.

This function is so important that it cannot be left only to those who are preoccupied with domestic issues.

The foreign policy establishment needs to see the revival of American democracy as a basis for US global leadership in the future.

This will require direct engagement with the American public, similar to the concerted effort to promote the Marshall Plan to reluctant Americans in 1947 and 1948.

Policymakers must first listen to Americans to try to understand and mitigate their frustration with their democracy in order to preserve and enhance US influence in the world.

The most comprehensive public opinion statement on foreign views of the United States began in 2002 with the Pew Research Center’s Global Attitudes Project.

According to a US State Department survey.

This assessment fell significantly during the administration of President George W. Bush to its lowest level in 2008, with the US global image dropping by 47% in Germany, 30 points in the United Kingdom, and 27 points in Japan.

Public sentiment then rebounded markedly when President Barack Obama took office in 2009, up 33% in France and Germany, and 25 points in Spain.

But positive views of the United States fell again during Donald Trump’s presidency, reaching their lowest levels, dropping 32 points in France, 31 points in Germany and Japan, and 30 points in Canada.

In the early years of President Joe Biden’s administration, America’s preference rebounded to levels similar to those of the Obama years in most countries, rising by 34 points in France (to 65%), and 33 points in Germany (to 59%). and 30 points in Japan (71%).

For the most part, the writer said, foreign audiences, especially those in Europe, where the data is more extensive, loved Bill Clinton, hated George W. Bush, loved Obama, and hated Trump.

What is striking is the increased volatility in such sentiments, which means that the index swings much more and more quickly from presidency to presidency.

In early 2017, a German official commented, “Isn’t that interesting?

It took Bush eight years to get to that low… It took Trump three months!”

Stokes considered that whoever is sitting in the Oval Office is the one who prints the international views of American democracy.

A 2020 Eurasia Group Foundation survey found that 26% of German respondents think an American-style democracy would be more attractive if a different person was the president of the United States.

But the international challenge to the United States’ standing in the world goes beyond personalities.

Foreigners have growing concerns about the health and direction of American democracy due to the deep partisanship and dysfunction that predated Trump’s presidency.

In 2012, Pew Research found that 45% of respondents in 20 countries around the world said they like American ideas about democracy, including 64% of Japanese, 60% of Tunisians, and 58% of Italians, and 52% are Chinese.

This appeal was present in every country surveyed in 2002.

Today, few people around the world have much faith in American democracy.

An average of 57% said that American democracy has set a good example but hasn’t in recent years.

As a Green Party member of the German Bundestag said in an interview with the writer in 2021, “I trust America… But I don’t trust her political system”.

In a 2022 survey of nine countries, 55% of respondents had a positive view of American democracy, largely unchanged since 2019.

But as shown in Pew surveys, publics in countries more closely aligned with the states feel the United States is less optimistic about America’s democracy.

Only 20% of Japanese and 29% of Germans have a positive view of American democracy in the Eurasia Group Foundation poll.

By comparison, 84% of Nigerians and 81% of Indians admire American ideas about democracy.

In turn, the Japanese and German republics don’t want their systems of government to become more like the United States, while the Nigerians and Indians do.

Stokes concluded by saying that it is recognized that the number of countries surveyed by both the Pew Foundation and the Eurasia Group Foundation, is small.

But both surveys are geographically diverse and include major economies and allies of the United States.

He explained that foreigners have growing concerns about the health and future of US democracy.