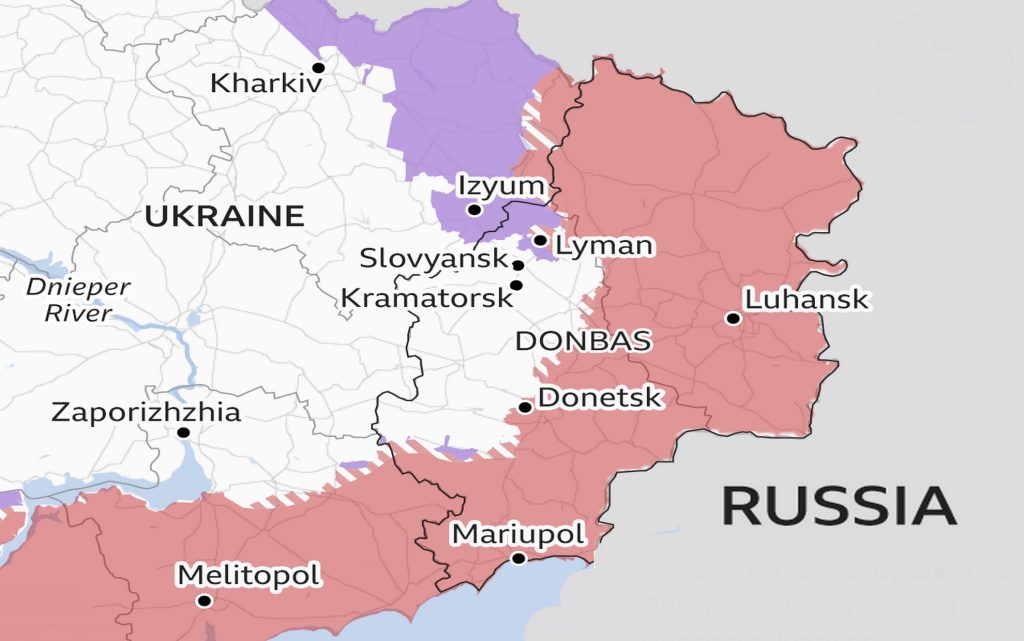 The Ukrainian army’s control on Sunday of the city of Lyman, which is an important railway center in the Donetsk region (east) annexed by Moscow, poses a major problem for the Russian forces, which find themselves in a defensive position and are forced to draw a new front line.

In the east of the Kharkiv region in northeastern Ukraine, railways meet at the Kobyansk Vozlovy station and then head south towards Svatovey in the Moscow-annexed Lugansk region.

However, the situation has changed in recent days.

The Ukrainian counterattack allowed Kiev to regain large parts of the region’s territory, forcing the Russian forces to retreat.

“This site has always been an important strategic point,” said a Ukrainian soldier nicknamed “Rusomakha”.

Behind him, the windows of the station were smashed, and the lobby was desolate.

While inspecting the unit to which Rosomakha belongs to the station on Sunday, Ukrainian President Volodymyr Zelensky officially announced the restoration of Lyman on the front line in the Donetsk region.

In a video clip on the occasion of Kyiv’s achievement of this great victory, two days after Moscow annexed the Ukrainian regions partially or completely controlled by its army, he confirmed that the city was “completely rid” of the Russian army.

Kobyansk Vozlovy is located 90 kilometers north of Lyman along the Oskil River, within walking distance of the city of Kobyansk, which was recaptured by the Ukrainians last week.

Faced with these setbacks, the Russian army was compelled to withdraw hastily towards Svatove, halfway between the cities of Severdonetsk and Lysechhansk, which it had difficulty capturing from the Ukrainians during the summer.

It is now expected that the Russian forces will try to stop the advance of the Ukrainian army in the depths of the areas that Moscow has declared annexation, in Svatovey, 30 km from this railway line.

But Rosomakha and his comrades in the Ukrainian army are not worried.

They assert that the Russian army fled defeated, stressing that Ukraine will continue its offensive as soon as it reorganizes the ranks of its forces in Kobyansk.

“They fled in terror,” he said, adding that holding prisoners gave them a good idea of ​​the Russian plot.

He explained that reservists had reinforced the ranks of the Russian army after the partial mobilization announced by Russian President Vladimir Putin less than ten days ago to curb the Kyiv counter-attack.