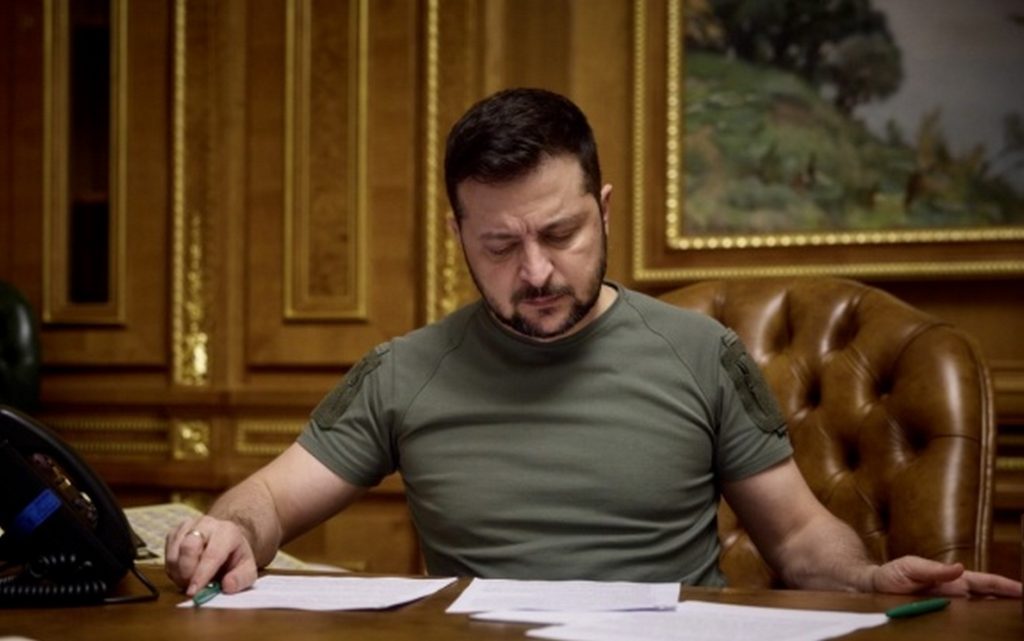 The Ukrainian President Volodymyr Zelensky confirmed Friday that he won’t negotiate with Russia as long as Vladimir Putin is its president, after the latter asked Kyiv to stop the fighting.

“Ukraine won’t negotiate with Russia as long as Putin is president of the Russian Federation,” Zelensky said in a video posted on the Internet…We’ll negotiate with the new president”.

On Friday, Ukrainian President Volodymyr Zelensky announced that his country had submitted an application to join the North Atlantic Treaty Organization (NATO) under accelerated procedures.

In a post on Telegram, Zelensky said: “Actually, we have already made our way to NATO…We’ve demonstrated our compliance with NATO standards”.

He added that this had become “a reality for Ukraine on the battlefield and in all aspects of our cooperation” with the alliance.

And he added: “Today, Ukraine is applying to do so by law… According to the procedure that best fits our goal of protecting our entire community”.

“In an urgent manner, we are taking our decisive steps by signing Ukraine’s application for accelerated membership in NATO,” he added.

On Friday, the United States imposed a new package of sanctions targeting hundreds of Russian personalities and companies, including members of the Russian legislature, the army and the Central Bank, in response to Moscow’s announcement to annex swathes of Ukraine to its territory.

The US Treasury said it had imposed sanctions on 14 officials of Russia’s military-industrial complex, two leaders of the country’s central bank, relatives of senior officials and 278 members of Russia’s legislature for their involvement in “organizing sham Russian referendums and attempting to annex Ukraine’s sovereign territory”.

The Treasury Department also issued directives warning of imposing sanctions on people outside Russia if they provide political or economic support to Moscow.

“We won’t stand idly by while Putin fraudulently attempts to annex parts of Ukraine,” Treasury Secretary Janet Yellen said in a statement.

The Russian embassy in Washington didn’t immediately respond to a Reuters request for comment.

The US move came after Russian President Vladimir Putin announced on Friday the annexation of about 15% of Ukraine’s territory, in the largest annexation in Europe since World War II.

Russia announced the annexation of these areas after holding what it called referendums in the occupied areas of Ukraine.

Western governments and Kiev said the voting violated international law, was coercive and didn’t represent the opinion of residents of these areas.

Among the targets of the sanctions imposed by the United States on Friday are Russian Deputy Prime Minister Alexander Novak, 109 members of the State Duma, 169 members of the Federation Council (senators) and the governor of the Russian Central Bank, Elvira Nabiullina.

The US State Department also said in a separate statement that it had imposed visa restrictions on more than 900 people, including members of the Russian military, the Belarusian army, and proxy factions acting on behalf of Russia, “for violating Ukraine’s sovereignty, territorial integrity, and political independence”.

On the other hand, European Union leaders pledged Friday that they would never recognize Russia’s illegal annexation of four other Ukrainian regions and accused the Kremlin of endangering global security.

“We firmly reject and categorically condemn Russia’s illegal annexation of Ukraine’s Donetsk, Lugansk (Luhansk), Zaporizhia and Kherson regions,” the leaders of the 27 countries said in a statement.

The statement was issued while President Vladimir Putin formally signed an agreement stipulating the annexation of the four regions to Russia.

The leaders also denounced the “illegal” referendums organized by the Kremlin to justify its land grab and called on “all countries and international organizations to categorically reject this illegal annexation”.

The four regions form an important land corridor between Russia and Crimea, which Moscow annexed in 2014.

In a statement, the bloc stated that “all these decisions are null and void and cannot result in any legal effect whatsoever. Crimea, Kherson, Zaporizhia, Donetsk and Luhansk are all Ukrainian”.

The EU stressed its commitment to support Ukraine’s “legitimate right” to regain control over all of its territory within its internationally recognized borders.

Putin has warned that he may use nuclear weapons to maintain control of Russian forces over these territories.

“Nuclear threats emanating from the Kremlin, military mobilization, the strategy of seeking to falsely present Ukrainian territory as Russian and portraying the war as being now on Russian soil won’t affect our resolve,” the EU leaders said.

The European Union imposed an unprecedented series of sanctions on Moscow in response to its war in Ukraine and spent billions of euros to support Kyiv with weapons.

The European Union is currently considering the possibility of taking a series of economic measures against the Kremlin targeting Russian exports worth nearly seven billion dollars and seeking to set a ceiling for the price of Russian oil.

“We will strengthen our restrictive measures to counter Russia’s illegal actions,” the statement said, this will further increase pressure on Russia to end its war of aggression”.

On Friday, Israel also announced its non-recognition of Russia’s annexation of the four Ukrainian provinces, which Moscow announced earlier today.

The Israeli Ministry of Foreign Affairs said, in a statement, that Israel supports the sovereignty and territorial integrity of Ukraine.

Statement added, “Israel won’t recognize the annexation of the four provinces by Russia”.

The statement concluded by saying: “We have previously confirmed this position several times, in recent days”.