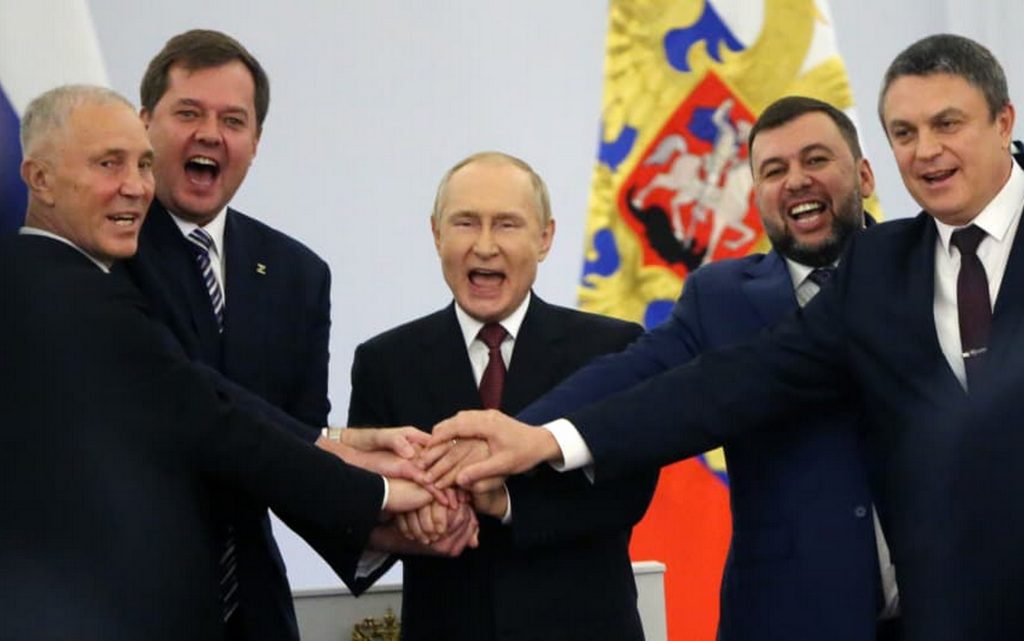 The Russian President Vladimir Putin on Friday signed treaties to include four Ukrainian regions took by Russian forces, Lugansk, Donetsk, Kherson and Zaporizhia, during a grand ceremony in the Kremlin.

After that, he clasped the hands of the leaders of the areas under the control of Russian forces, who were appointed by Moscow, on a podium in the presence of elite figures in Russia and chanted with them “Russia! Russia”!.

On Friday, the Russian president denied seeking to revive the Soviet Union, moments after Moscow announced the annexation of four Ukrainian regions after referendums denounced by Kyiv and the West.

In a speech he delivered in the Kremlin in front of hundreds of senior Russian politicians to officially announce the annexation of four Ukrainian regions occupied by Russian forces, Putin said that Russia will defend its new territories with all available means, statements that may indicate an escalation in the conflict with Ukraine.

The Russian president accused Western countries of seeking to turn Russia into a “colony”, and Putin said in televised statements, “It stems from selfishness in order to preserve its unlimited power (ie, Western countries).

These are the real reasons for this hybrid war that the West is waging against us… They want to make us a colony”.

Russian President Vladimir Putin expressed his confidence that the Federal Assembly will support the laws relating to the accession of new lands to Russia, stressing that this is the legitimate right of citizens to self-determination, and is recognized by the United Nations, which affirms the right of peoples to self-determination.

“I want the Kyiv authorities and their true masters in the West to hear me,” Putin said, residents of Donetsk, Lugansk, Kherson and Zaporozhye are Russian citizens of today”.

Putin stressed that Russia will provide security for the Donbass republics, Kherson and Zaporizhia regions and will help them in the reconstruction of infrastructure.

Putin also warned the West that the residents of the four Ukrainian regions occupied by Moscow are “our citizens forever” as it prepares to officially announce its annexation during a ceremony in the Kremlin.

“I want to say this to the Kyiv regime and its masters in the West: the residents of Lugansk, Donetsk, Kherson and Zaporizhia will forever become our citizens,” Putin said, adding that they had made an “unambiguous choice” to join Russia.

Putin noted that “the United States is still in fact occupying Germany, Japan, South Korea and a number of other countries, describing them domestically as allies”.

Putin indicated that the US started the sabotage process in Europe and said: “They chose to sabotage, after they were given the Nord Stream 2, in fact, they began to destroy the European energy infrastructure, everyone understands who benefits from it”.

Putin indicated that the world has entered a period of revolutionary transformations, noting that “Russia is striving for a just and free path to development without dictates and tyranny”.

Russian President Vladimir Putin also signed a decree facilitating the granting of Russian citizenship to foreigners if they join the army, based on a decree published by the government on Friday.

The document states that foreigners will be entitled to go through an expedited application process if they have served in the Russian army for at least six months or have sustained an injury before that time has passed that makes it impossible for them to continue fighting.