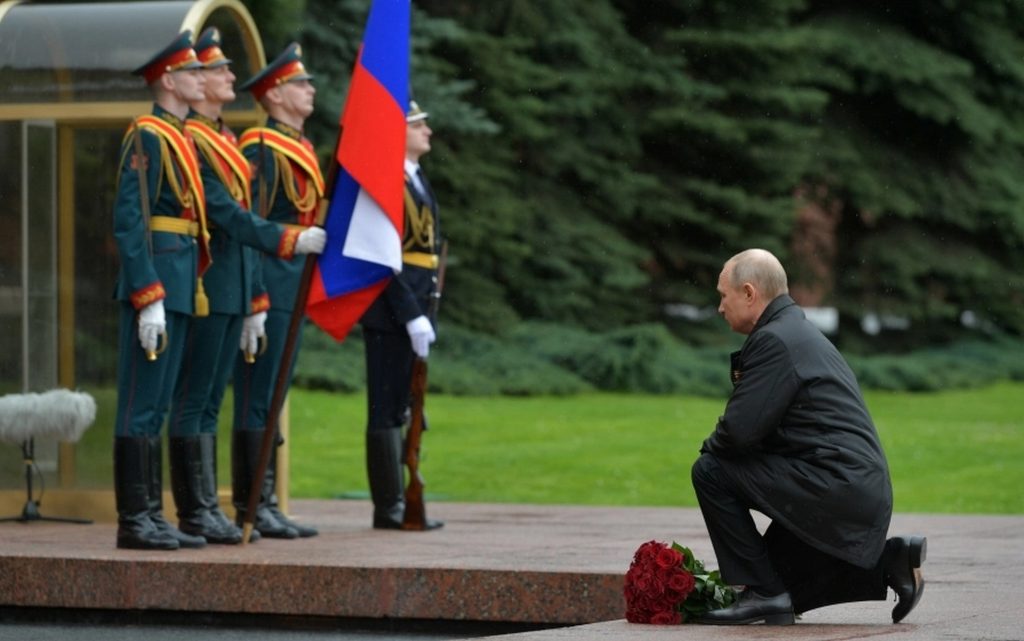 The ninth of May this year is the seventy-sixth anniversary of the victory over the Nazis.

A victory celebrated every year, bringing back to the human memory one of the most difficult and fateful periods of mankind, where humanity suffered over a period of 6 years, which is term of the Second World War, when millions of victims fell around the world.

Of course, Russia’s share of it was more than 25 million people.

We won’t talk about the extent of devastation in the world, but suffice it to say that most of the cities of Europe were razed to the ground and various parts of the world witnessed terrible devastation, which remained immortal in the records of humanity.

The world today is very different from that era, especially after eliminating the forces of Nazism and Fascism, which committed many atrocities everywhere.

Unfortunately, we face today many challenges and dangers, and perhaps the lessons learned from the experience of the Second World War may be a deterrent to any country in the world, because any confrontation between the great powers in this era will result in a total destruction of the planet.

The European continent has borne the brunt of destruction and war, and the American role was decisive, according to what Winston Churchill, who was beginning Roosevelt to interfere.

The direct US intervention in the war came immediately after Japan attacked Pearl Harbor, Britain’s surrender would have been imminent after the fall of France at Hitler’s hands.

From the east the Soviet Union was drawing closer, and there were no doubts about Hitler’s intentions towards it.

Whoever reads the book “Mein Kampf” of the German Leader, realizes that the attack on Russia was inconsistent with Hitler’s strategic ideas in his book.

The German leader often spoke on many occasions about the mistake made by Napoleon Bonaparte, when most European countries rallied against him, added to that, Napoleon’s attack on Russia.

As a result, everyone allied against him, and his army was defeated.

What Hitler did was the same thing, and without a doubt it was the Barbarossa plan, which is an excessively ambitious plan, which would have changed the world forever if the Wehrmacht had managed to accomplish it.

Here we list three factors that were decisive in the failure of this plan:

It is fortunate for humanity to have all these mistakes, otherwise the world today would be completely different.

The Soviet role was a decisive role in hastening the fall of the Third Reich, and the supremacy after confronting the German attack was to regain the initiative and advance to reach the capital of the Third Reich, bring down Nazism and raise the Soviet flag over Berlin, and what is most surprising is the emergence of voices comes from some ignorant people, claiming that Russia had no role in liberating Europe and the whole world from Nazism, without any indifference to the facts of history drawn on the ground, and with the existence of written, audible and visual evidence documenting this role, which was decisive in confronting and defeating the evils of Nazism.

Going back to recent history, Russia today is trying again to raise the Russian flag in the sky of Berlin, but in a completely different way.

Raising the flag is next to the flags of friendly countries in the European continent and the world as a whole, regardless of the suffering that Europe and Russia experienced from Nazism in the past, today they face challenges represented in international cooperation to solve crises around the world, develop economic cooperation and exchange experiences for the benefit of peoples and the interests of nations.

Europe has become within a unified system represented by the European Union, and it has economic, security, social and cultural imperatives that make it close to Russia, in terms of historical ties.

It is a shame for a country like Germany to be the victim of cheap American blackmail, increased by incitement by parties within Germany, and within Europe as a whole, that insists on preserving Russia’s image as an enemy state.

The problem that the European continent suffers from is a crisis and conflict between the NATO, led by the United States, and the EU form.

NATO was formed immediately after World War II, with the beginning of the so-called Cold War between the socialist eastern bloc and the capitalist West, ironically, Germany was the center stage and a confrontation ground, and it was at that time divided into two parts, Soviet eastern part, and Western belongs to NATO.

The capital Berlin, above which the flags of the Soviet Union and the Allied flags were raised, is separated by a wall, placed without any regard for the peoples.

Of course, with the current European division between NATO’s requirements and the goals and needs of the European Union, the big problem lies on this continent, which was burdened by the Coronavirus pandemic like other countries in the world, and it was also the scene of the influx of refugees, and coincidentally, Germany was also the epicenter of the event again.

Victory over Nazism opened the way to a future dominated by cooperation between states, to bury the hatches and overcome the old wounds, which some parties insist on keeping them open, not even tossing salt on them.

There is no way to ignore the Russian role, which was essential in defeating Nazism and fascism in the past, and today Russia’s role is also similar by working to defeat new types of evils represented in terrorism and political and economic blackmail practiced by some authoritarian forces in the world, in addition to being keen on International stability.

Part of Europe, was the eastern part of course, that, Soviet Union help to rebuild, and bring back industrial force in all of eastern Europe back on track.

For sure, such a role cannot be done solo, so Russia is trying to reaches out to its European neighbors to be part of a global movement that works to enhance opportunities for cooperation and join force to implement a true concept of human justice based on values, which is the same values that made it possible to defeat the Nazism.