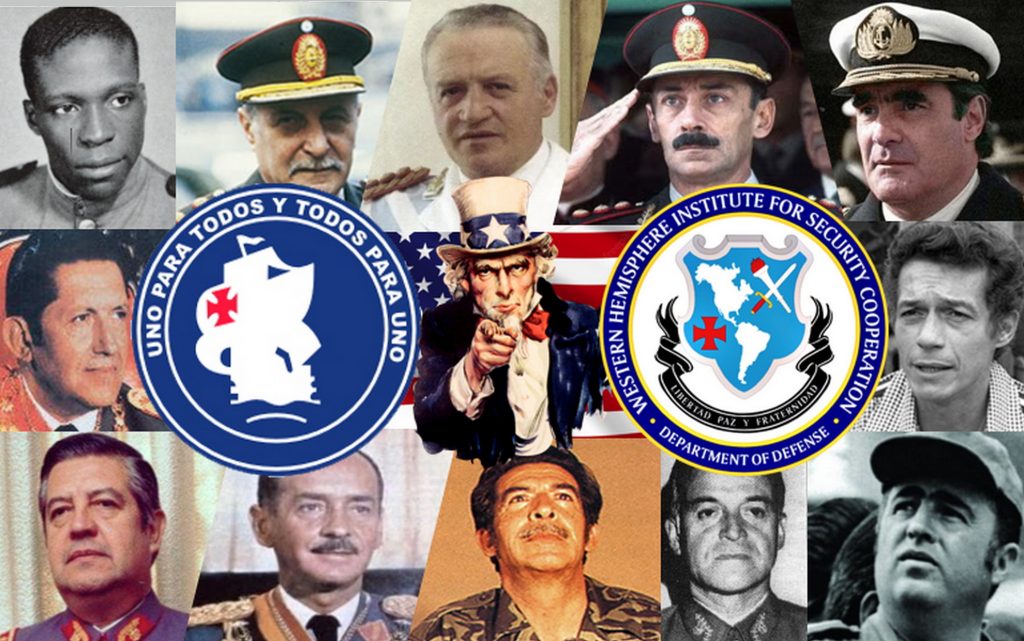 For our Latino friends, who suffered a lot by the hand of US imperialism for decades, and the hand of their own flesh and blood traitors, this is “The Shellshock Series” Neurosis de Guerra – that will document and tell the story.

Expose what is still not known to some or to remind those of fishy memory the reality of real Evil power in the world.

The First Episode, which will be followed by another episodes, we’ll be dealing with the story of the atrocities committed by the country of Uncle Sam in both Latin and Central America.

We begin our story, once upon a time.

Only a year after WWII, 1946, the Land of Uncle Sam, founded a building at the Central American state of Panama, more specifically at the Panama Canal area, which is under the control of the Yankee Doodle forces.

This building called the School of the Americas.

However, in 1948, the government of Panama, demanded that this so called ((School)) to out of Panama, because of its destructive rule and suspicious activities which causing chaos and problems in Central and Latin America.

And immediately after that kicked out, we move our sight to the Land of the Free, at the former confederate state of Georgia… more specifically at the military base of Fort Benning, where is an innocent look building.

Since that date, and for years and decades to come, this so called Institute, prepared and trained thousands of military, security intelligence amigos, who worked at central and Latin America’s states.

No surprise, among those amigos, the most horrible, most nasty criminals, killers, dictators, put whatever you want of description of those Thugs & Tyrants, those who oppressed the Latino people, and ruled and dominate several Central and South American countries, with Iron Fist and turn the entire two regions to a big Guantanamo, run and controlled by Fire & Iron.

Any one, who says No, or oppose, of criticize, will be kidnapped, jailed, tortured, hide behind the sun, or be lucky to be killed and buried.

And the excuse… simple… a communist want to handover these states to the USSR.

Before we continue our story lets, ((honorary mention)) some of the Graduates of that Institute.

This Institute who was period a Star spangled banner School to teach brutality and a factory to produce Thugs & Tyrants.

– Emilio Eduardo Massera: The Head of the Argentinean navy, who was the officer involved in the military coup in 1976.

– Jorge Rafael Videla: The Head of the military coup and president of Argentina from 1976 to 1981.

– Leopoldo Galtieri: the 3rd 1976 coup amigo, and the 2nd in command after Jorge Rafael Videla.

If we’re going to count more, it will take forever, from Honduras, to Mexico, Peru, Uruguay, Paraguay, Venezuela, and Panama.

In short, there are graduates who accomplished a lot in their home countries in Central and Latin America.

The School of the 2 Americas, was the true Factory of Evil, the place that brought list of Criminals who ruled their countries in Central and Latin America, turning it to a disciple of Uncle Sam, as they did everything you can imagine of all kind of Terroir and oppression.

They committed crimes against humanity, with all kinds of transgressions against all principles of human values, justice, freedom, human rights and democracy, with the knowledge and the blessing of the leader of the free world and the defender of the values of democracy, freedom and human rights… the country of the ((O say can you see by the dawn’s early light)).

One of the greatest gift to Humanity, the book of – The School of the Americas – by Lesley Gill… That book told the story of the Factory of Evil.

As for the Land of Star Spangled banner, used to train and prepare military officers, intelligence security personnel of foreign countries, is not a secret nor new piece of information.

They use to train to this day, foreigners along their own soldiers, and officers in more than 150 Military base or Training center, military academy on its soil.

All kind of specializations and fields of security and military at all its various types,

Also, they have Spanish language training curricula for all trainees coming from Spanish-speaking countries.

Of course, not just this Institute, there are more centers or training facilities offers these training courses.

However, perhaps the interesting method is, military and security mobile teams that provide these training and even support and backing within Central and Latin American countries.

The big difference, is at the quality of the training, this school provides to officers and military, security and intelligence personnel, from Central and Latin American countries, which results from these trainings, transform these trainees into something like human monsters, that don’t have the slightest feeling or sense, even an ounce of humanity.

The institute offers a set of training programs bearing titles, suggesting to some that they are technological titles that contain innocent scientific techniques, for example:

The small-scale attacks, counter-terrorism efforts, Psychological warfare operations, International intelligence methods, principles of unconventional warfare, besides programs of joint training with Uncle Sam’s forces, which also benefit from contact with their counterparts from other countries, perhaps to build experiences that will benefit them when they sent to those countries to impose democracy, freedom, human rights… and fight terrorism.

Of course, no accurate numbers are announced or revealed regarding the number of foreign trainees, nor from which countries they are, whether they are training on the territory of the State of Liberty, and in other regions around the world.

In this alliance, making these countries accomplices in the crimes committed by these trainees when they return to their countries.

We must not forget that the training dependency is not only linked to the army, but is linked to other agencies of Uncle Sam, such as the Federal Bureau of Investigation, the Central Intelligence Agency, the Customs Agency, the Drug Enforcement Agency and others…

The US citizen, doesn’t know about his country’s activities and the extent of its interference in the affairs of others, as he is absent either by his will or by virtue of his falling under the influence of the lifestyle in the land of freedom and democracy, the weakness of general culture and the lack of knowledge, which is also controlled by a group of media and entertainment institutions that make what was left of his mind, if he had a mind at all, completely robbed and directed, with daily meals of brainwashing.

And just to keep you remembered…. We’re not talking about North Korea here?!

Of course, no one thinks how these Yankee Doodle men managed to build this empire that has ruled the world for decades.

The land of freedom and the sanctuary of the oppressed and those looking for a better life, these dreamers, are nothing but a bunch of absentees, either willingly or without their knowledge.

The stereotypical image of the population of Uncle Sam’s State, and since the First World War, has developed their country as a land that protects rights and freedoms and defends the oppressed in the world, and of course also, that period was punctuated by a couple of shellshocks that created a kind of doubt, or perhaps awakened some permanent dreamers, those who are following the American dream, to witness heinous acts carried out under the blue, red and white flag in other countries around the world, with various justifications such as fighting communism and terrorism, and even inside the country, when, for example, some people of the color of their skin treated in ways that are “very human!”

In addition to enslaving the people of Uncle Sam, materially and morally, making them work like a machine to preserve what they own, or what they don’t actually own on the basis that they live on debt and loans, as life on Credit card, the state of health insurance, education, security in the streets, moral decay, the world of entertainment, and many other tools of robbery.

Perhaps the most laughable thing is the headlines released by the media and the press in Uncle Sam’s State, after the inside job on 9/11, when we started reading the phrase “Why do they hate us?”…. don’t know why?

Do you really wanna know?

Shall we start counting?