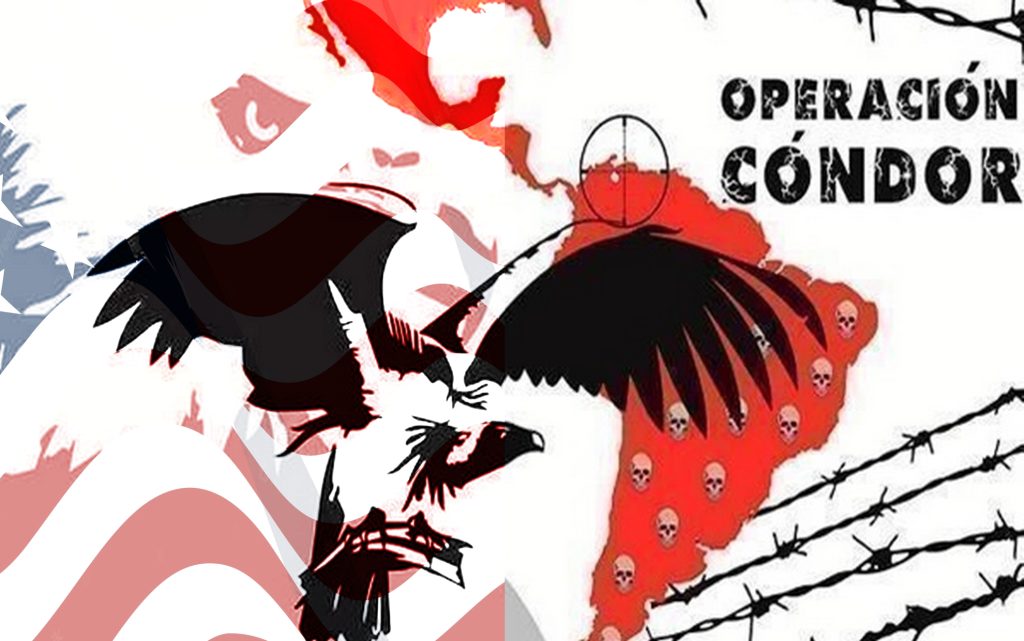 The United States chose the name of the most famous bird in the American continent, to be a symbol of one of the most famous operations of the CIA and implementing its agents in Latin America, against the Soviet communist tide there, to be the justification for fighting communism, a veil for you from the persecution and crimes that were committed against the peoples of many countries of the continent.

It comes as a coincidence that several military coups repeated in many Central and South American countries during the late sixties and seventies of the last century.

A military coup in Bolivia in 1971 brought General Hugo Banzer to power, and one of the most famous periods of democracy and freedom in Latin America overthrown, when an alliance of a civilian military coup came to power in Montevideo, in 1973, that put in power President Juan Maria Bordabere, and General Chilean miscreant Augusto Pinochet overthrew the democratic civilian rule of President Salvador Allende and murdered him inside the presidential palace in Santiago that same year.

Also in Peru, in 1975, a coup took place that overthrew the civilian government, and brought General Francisco Morales Bermudez to power in Lima.

In 1976, the most famous coup took place in Argentina, which brought the Videla/Maceira/Galtieri trio to power in Buenos Aires, so we went with them, and after Videla, Roberto Viola came to power, and so on, Argentina entered during that period, from 76 until the late eighties a very difficult period, especially in the economic sector.

From all of that, we find that during a period of no more than seven years, a large number of democratic civil government regimes were overthrown in Latin American countries, to be replaced by a military coup d’etat, whose members are students from the School of the Americas.

As we mentioned at the beginning of the census era coups.

In 1964, in the largest country on the continent, Brazil, where in that year the civilian rule of President Joao Goulard was overthrown, and General Alfredo Strobisner rose to power in Paraguay.

It is known that intelligence cooperation between the United States and the military and security institutions in Central and Latin America began immediately after the end of World War II.

The justifications for that cooperation were security coordination in line with the requirements of American national security in this vital and sensitive region, as well as coordination in the search and pursuit of Nazis fleeing from Germany and Europe, after World War II, especially those against whom there are accusations of war crimes and murder of Jews.

The Central and Latin American countries were the safe havens for many European Nazis and German fugitives, after the defeat of the Axis armies in World War II.

During that period, and as we mentioned at the beginning of this series, the story of the founding of what is known as the School of the Americas in Panama in 1946, and its transfer later to the United States in 1948, so that this school would train and qualify Latin military and security cadres to perform “great” services for the country of Uncle Sam!

The funny thing is, that the United States trained these criminals to be properly named, to eliminate the civil democratic systems elected by the people in those countries, while Washington brags about without any moral scruples, as if we are foolish people, shaking our heads with satisfaction at its actions, and its allegations about Its defense of freedom, democracy and human rights, and we rejoice at the melodies of these false and false values.

That school trained dozens of those who came to power in those countries, in addition to thousands of their associates and men in power.

In other words, entire crews of criminals have been prepared to assassinate democracy in the country of democracy?!

Washington’s justification, of course, was to eliminate and get rid of any communist tide that reached those countries, but the reality was that this was nothing but an excuse used by Washington, in order to build its Roman-American empire.

This was done, as we mentioned, in stages, started by Washington in the late nineteenth century, by removing and expelling European colonialism from those countries, to replace it.

Washington pushed the Spaniards/Portuguese/British/French out of its way — in their place.

On September 3, 1973, the commander of the Brazilian army, General Brino Borges Fortes, came out with a proposal to exchange intelligence and security information between all the security and intelligence services in Latin American countries, in order to help what he called “attempts to sabotage and conspiracy”.

What is meant by that, of course, is all the organizations of the movements and parties that adopted the communist socialist ideology, which were active in practically all countries of the world.

Several months later, the leaders of the security and intelligence services of Chile, Uruguay, Bolivia and others met with General Alberto Villar, Vice President of the Argentine Federal Police, founder of the famous AAA execution battalion, to develop a plan for joint security coordination and cooperation.

That what agreed upon, eliminating all subversive threats and any danger posed by thousands of political refugees in Argentina itself.

In less than weeks, human corpses began appearing in the streets, garbage dumps, and on the seashore in the Argentine capital, the bodies of refugee politicians who were left-wing political activists.

On the birthday of Chilean dictator Augusto Pinochet’s 60th birthday, November 25, 1975, the heads of the intelligence services of Chile, Argentina, Bolivia, Paraguay, Uruguay and the head of Chile’s secret police, Manuel Contreras, another graduate of the School of the Americas, met.

The meeting took place in Santiago, the capital of Chile, and they put final touches and final agreement into place to start Operation Condor.

It is expected that at the beginning of the operation, all the security and intelligence services, at unified times, will target all organizations, parties, and individuals with a left-wing orientation and activity in all Latin American countries, especially those that are armed in focus.

But what happened was that any form of opposition and political difference was targeted, whoever and whoever, without discrimination.

Armed/unarmed… Leftist, communist or otherwise it doesn’t matter… All forms of opposition, whoever they are and whatever they are, have been targeted.

It has been targeted, arrested, prosecuted, killed and imprisoned, any opponent, his family members, his friends, and all those connected with them.

Of course, and in light of that chaos, many innocents who had nothing to do with the opposition or otherwise, fell victim to these measures, including kidnapping, arrest, repression, imprisonment, torture, and killing, you name it.

Argentina was the most famous epicenter of that dirty war, during which more than 30,000 people were killed between political activists and civilians with their families, and a large number of writers, school and university professors, clergymen, journalists, artists, athletes and social activists of both sexes, who had nothing to do with politics even, Not to mention the disappearance of thousands of people, and the fate of a large number of them is still unknown to this day.

Argentina and Chile were at the forefront of the Latin American countries, in which most of these crimes took place and this systematic purge, whose architect and theorist was the criminal, Argentine General Luis Maria Mendia, who received his military education in France, so it was a strange coincidence that repressive methods were used and criminality during Operation Condor similar to those used by France in Algeria.

Perhaps one of the most famous of these measures was carrying helicopters for these activists, and throwing them alive in the ocean.

In the winter of 1977, unusual storms in the South Atlantic brought many human bodies to the shores of the Argentine capital, Buenos Aires, perhaps as a divine will to expose these crimes.

The scenes of those corpses, which were brought by the ocean waves to the shores of the sea, were frightening and tragic, showing the ugliness of the crime in Argentina.

Even infants, from newborns, who were born to female prisoners in detention, were taken and handed over to families loyal to the authority, in systematic forced adoption processes.

Despite the presence of Argentina, Chile and Paraguay at the top of the list of countries, Operation Condor was spread throughout the countries of Central and Latin America, and a number of activists and opposition politicians were also tracked, kidnapped, or even killed in Europe.

During those operations, many European citizens from countries such as France and Italy were killed.

As for Mexico, which was not directly involved in Operation Condor, it had its own operation.

During the period known as the blood decade from 1975 to 1985, the security services in Mexico prosecuted, kidnapped, arrested, imprisoned, tortured, raped and killed thousands.

The pretext was the prosecution and elimination of organized crime organizations and drug trafficking, in which the Mexican state of Sinaloa was one of the most famous hotbeds of these operations.

In addition, all forms of political opposition liquidated, and they eliminated all unwanted activities by the Mexican authorities.

Well, where was General Sam’s role in all of this?

The role was initially and mainly that Uncle Sam was the one who trained and equipped everyone who carried out these operations in the School of the Americas.

The school produced thousands of officers and security men who came to power and led the security, military and intelligence services, and who carried out all operations of arrests, rape, torture, killing and ethnic genocide.

For the indigenous people, there is not a single graduate of the School of the Americas who has not had blood on his hands.

Uncle Sam also provided various forms of material, moral, intelligence, advisory and even guidance support, before and during the execution of all these crimes.

Coordination was direct, as communication remained constant and at the highest levels.

The Central Intelligence Agency and the Federal Bureau of Investigation provided a large amount of security and intelligence information that was reaching the security services, the army and the intelligence services in the Latin American country, either through direct communication, or through joint agents, spies and agents.

All the School of the Americas manuals were applied, which were taught to the trainees of various methods of torture, interrogation, extortion and pressure.

American documents, which were recently unveiled, revealed that the United States provided organizational, financial and technical assistance during the implementation of Operation Condor.

It also provided all tools, equipment, harnesses and techniques, including Jacob, satellite images, coordinates, and many more, from advanced communication and monitoring tools.

It also allowed all those criminal governments to use what is known as their respective Continental Communication System located in the Panama Canal.

The American media and press have also provided all forms of support, including campaigns, media coverage, and broadcasts of cosmetic propaganda to justify and hide the truth of what is happening, in addition to protecting these criminals from any international criticism.

And what can be described, the greatest diplomatic serial killer, Henry Kissinger, justified and placed these crimes within the global American campaign against all those who target American interests, not even… And when some timid questions were asked to him to inquire about what was going on, he would answer, justify, defend and set matters in the context of “Supreme American Values”.