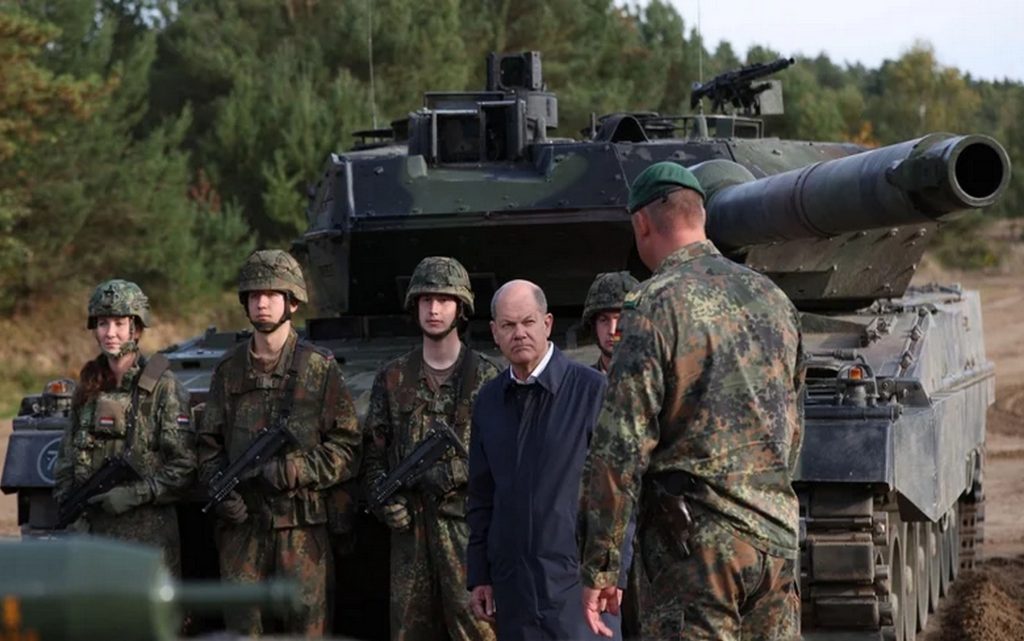 The Guardian newspaper posted an article regarding the German government to supply Ukraine with tanks, especially Leopard tanks, to confront Russia.

As the writer Timothy Garton Ash said: “If Germany really learned from its history, it would send tanks to defend Ukraine”.

Germany bears a historic responsibility to help defend a free and sovereign Ukraine.

Berlin represents the central power in Europe and that it’s uniquely qualified to shape a larger European response to ending Vladimir Putin’s terrorist war, in a way that prevents future aggression over places like Taiwan.

And as evidence of the strategic intent to fulfill this commitment.

The German government must commit at the meeting of the Ukrainian Defense Contact Group in Ramstein, Germany, on Friday, to send its tanks to Kyiv, and not just allow countries such as Poland and Finland to send German Leopard 2 tanks to it.

This will be done according to a coordinated European action.

Eighty years ago, Nazi Germany itself was waging a war of terror on this same Ukrainian soil: the same cities, towns and villages were victims of it as now in Russia, and perhaps the same people were victims of both wars.

Boris Romanchenko, for example, a survivor of four Nazi concentration camps, was killed by a Russian missile in Kharkiv.

What Putin is doing by destroying the independent existence of a neighboring country, with war crimes, acts of genocide and targeting civilians, is the closest we have come now since 1945 to what Adolf Hitler did in World War II, the writer said.

The writer explained that the lesson we learn from this history is not that German tanks should never be used against Russia, whatever the Kremlin does, but that they should be used to protect the Ukrainians, who were among the biggest victims of both Hitler and Stalin.

The second stage of historical responsibility comes from what German President Frank Steinmeier described as a bitter failure of German policy towards Russia after the annexation of Crimea and the start of Russian aggression in eastern Ukraine in 2014.

Instead of Germany reducing its dependence on Russian energy, it increased its use after 2014.

More than 50% of its total gas imports came from Moscow, as well as the construction of the previously unused Nord Stream 2 pipeline.

This historical error led to the third and final stage.

A month after Russia’s all-out invasion of Ukraine on February 24 last year, a group of prominent German figures drafted a call for an immediate boycott of fuel from Russia.

German Chancellor Olaf Scholz decided not to follow this path, arguing that it would jeopardize “hundreds of thousands of jobs” and plunge Germany and Europe into recession.

There are concerns in Berlin about the Russian escalation in response to the supply of advanced Western weapons, which may amount to the use of a Russian nuclear weapon, which also raises Washington’s concern.

The writer concluded that Putin is already escalating the situation, and is now mobilizing the Russian Federation’s massive reserves of manpower, and may intend to launch a new offensive sometime this year.