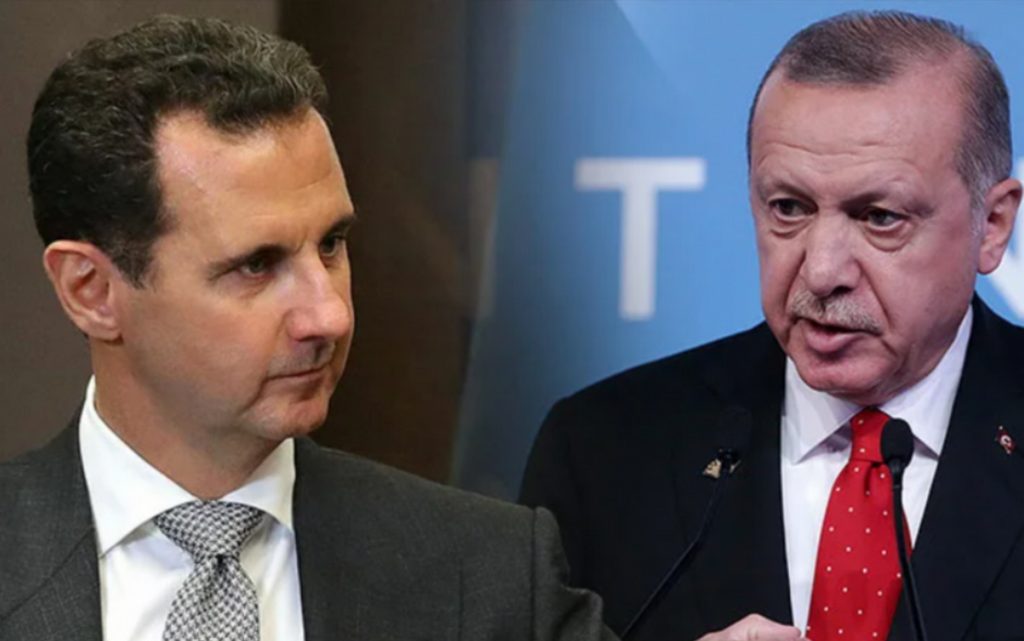 The Times newspaper published a report by its correspondent, Hannah Lucinda Smith, entitled: “A blow to the Syrian opposition after Erdogan extended a hand of friendship to Assad”.

The report notes that Türkiye, the last strong ally of the Syrian opposition, is working to change course and is moving towards reconciliation with Damascus.

The Turkish and Syrian defense ministers met in Moscow last week, the first meeting at the ministerial level since 2011.

The foreign ministers are expected to meet this month, and President Erdogan has signaled his willingness to meet Assad.

The report quoted Rami al Jarrah, one of the first Syrian dissidents to tweet about the protests in Damascus 12 years ago, and now lives in exile in Germany, as saying that this shift “isn’t a surprise, but it is still a big slap in the face for those who aspire to a free Syria”.

However, he believes that the Syrian diaspora in Türkiye has also made mistakes.

He said, Syrian politicians, activists, and journalists dealt with Türkiye as a one-party state and ruled out establishing relations with Turkish opposition parties.

This led to resentment towards the Syrians by the Turks who oppose Erdogan, and ultimately left their fate in the hands of one pragmatic politician.

Although Russian President Putin is pushing for reconciliation, Erdogan has his own internal motives.

There is growing anger in Türkiye over hosting 3.6 million Syrian refugees, and opinion polls show that the vast majority of Turks want them to leave, which is what Türkiye’s secular opposition parties, more sympathetic to Assad, have long called for.

The Times noted that Erdogan was initially welcoming to the Syrians and other Arab Spring exiles, and they, in turn, largely supported him, even as he slipped into a kind of authoritarianism.

The Turks believe, according to the Times, that if the Syrians stay and obtain Turkish citizenship, as has already happened with hundreds of thousands, they will become an important electoral bloc that will increase votes in the future in favor of Erdogan.

And with the escalation of Türkiye’s economic problems and the turning of the political tide in the region against him, Erdogan sought to rebuild bridges with his neighbors and present himself as the leader who will return the Syrians to their country.

The Times mentioned Erdogan’s meeting in recent months with the leaders of the Kingdom of Saudi Arabia and the United Arab Emirates, and his initiatives towards Egypt.

The Times added, Erdogan had restored diplomatic relations with Israel, after years of disagreements over Ankara’s relations with Hamas and Israel’s treatment of the Palestinians.

But Syria, the Times report notes, remains the real prize.

Omer Onhon, Türkiye’s last ambassador to Syria, 2012, told the Times: “Reconciliation with Egypt makes diplomats happy, but for ordinary people, it isn’t important… Syria is unique because its problems affect people on the street in Türkiye directly, especially the refugee issue… It might even affect how people vote”.

The Times considered that the depth and complexity of the rift, which includes Türkiye’s support for Islamist militias and Assad’s cooperation with Kurdish fighters, means that full reconciliation will be a long and difficult process.

It’s unlikely that the refugees will leave Türkiye quickly, even if an agreement is reached.

Ambassador Onhon added, “It’s not up to Türkiye to say when and how they should return… Syria is the source of the problem and will also be the source of the solution… But the regime and its mentality is still the same as it was in 2011”.

Turkish politicians of all stripes are counting on the same cause.

Umit Ozdag, a veteran nationalist, according to the Times, recently founded the Turkish Victory Party, solely on the issue of expelling refugees.

Kemal Kilicdaroglu, the leader of the Republican People’s Party, the main opposition party in Türkiye and a potential rival to Erdogan for the presidency, will attend a repatriation ceremony in Istanbul this weekend where Syrians board a bus back home, in front of television cameras.

The Times notes that if Erdogan manages to meet Assad before the elections in June, he will have seized his golden opportunity.

Mustafa Qarbouz, a professor at the American University and researcher at the Arab Center in Washington, agreed in his interview with the Times that Erdogan is selling an idea, not a fact.

Professor Qarbouz said, “The Turkish opposition was portraying him as a radical Islamist who couldn’t transcend his ideological boundaries…To win this difficult election, Erdogan aims to prove that he is a pragmatic populist who can deliver anything, including promises from opposition leaders to tackle the refugee crisis.