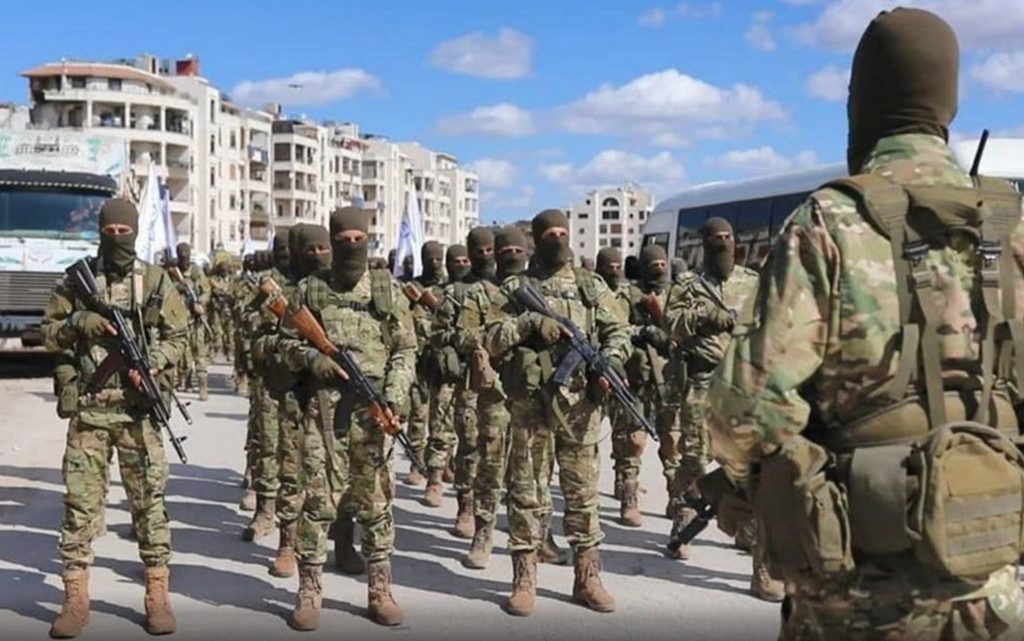 Local sources in Idlib governorate, northwestern Syria, revealed that about 800 armed mercenaries left the areas controlled by armed terrorist groups on their way to join the mercenaries of the Ukrainian army.

The sources confirmed that the mercenary militants’ deportations took place during the past two weeks in batches, and in direct coordination with the “Hay’at Tahrir al Sham”, the current front of the terrorist organization “Al Nusra Front”, which controls the northwestern region of Syria adjacent to the Turkish border.

The sources added that the operations of transporting the militants inside the Syrian territories took place in two phases, the first through small groups that were delivered to the “Al Jihad” and “Al Bashir” camps, north of the town of Sarmada, before transporting them by car at night to the other side of the Syrian-Turkish border through the (Bab al Hawa) crossing, which is under the full control of “Hay’at Tahrir al Sham”.

Local sources also revealed that most of the 800 gunmen are Syrian nationals, and belong to the pro-Turkish factions of the “Sham Legion,” the “National Front for Liberation,” and the “Third Legion,” and they were deported to Ukraine after a series of organizational understandings between their factions.

The contracting and promotion operations are limited, for reasons that are not entirely clear, to the hands of “Hay’at Tahrir al Sham”, and the terrorist organization has offered contract mercenaries from the aforementioned armed organizations large financial incentives amounting to 5,000 US dollars per month in return for evacuating their sites in al Ghab in the northwestern countryside of Hama, and some parts of it, Jisr al Shughor in Idlib countryside, and heading to the Ukrainian fronts.

The sources pointed out that semi-announced private offices in Idlib and its countryside have been created recently with the aim of attracting mercenaries to Ukraine, and priority is given to foreigners because most of them possess European passports that facilitate their arrival and movement in Ukraine, not to mention the fact that they usually have high combat experience.

The sources indicated that after the battles intensified on the fronts of Ukraine, and the need for guerrilla warfare methods there strengthened, new instructions arrived to “Hay’at Tahrir al Sham” and some leaders of what is known as the “National Army” loyal to Ankara, to open the door to volunteering for local militants to fight in Ukraine.

According to the sources, among the militants who left for Ukraine as part of the travel payments so far, about 60 militants belong to the faction (Ansar al Tawhid), which is the current front for ISIS in Idlib, and most of them are of Arab and foreign nationalities, indicating that these are known for their introversion.

And their ongoing doctrinal dispute with “Hay’at Tahrir al Sham” since their arrival in Idlib after their defeat in Iraq and Raqqa governorate.

The sources added, “Only foreigners were allowed to take their families with them outside Syria”, stressing that after the mercenary announced his initial approval, a contract was concluded whereby he would receive an advance payment equal to half of his salary for one month only.

The sources confirm that, until the moment of preparing the report, promotion offices are still active in the center of Idlib city and its western countryside, and they receive requests from militants who wish to join the ranks of the Ukrainian forces.