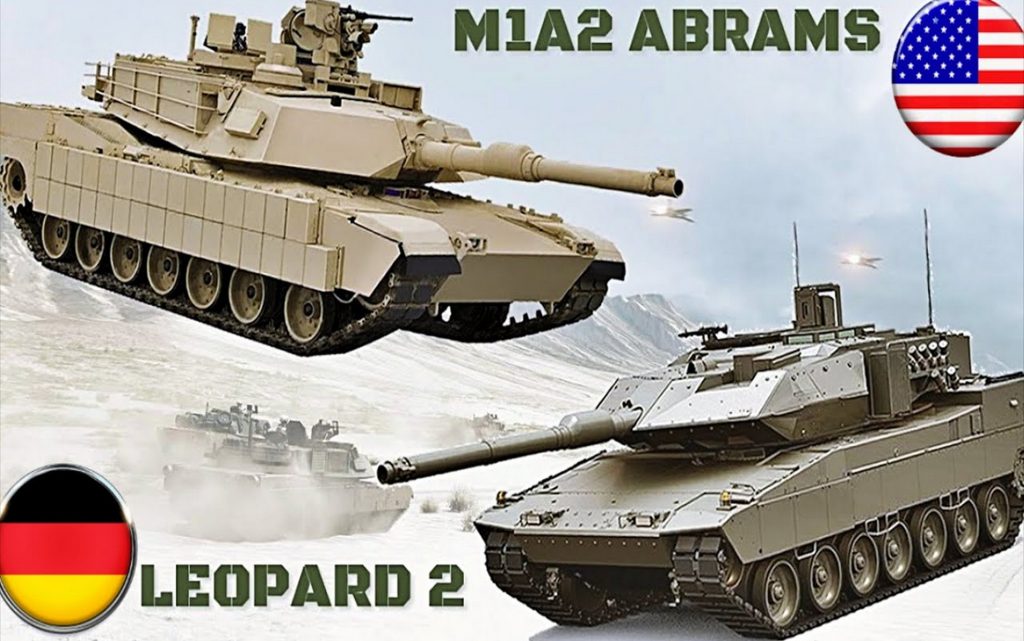 Many military and strategic experts saying that, there are 5 fundamental reasons that contribute to the West’s reluctance to supply Ukraine with modern American and German tanks, such as the “Leopard 2” or “Abrams”

The Kyiv regime has demanded to supply it with these tanks since the start of the Russian special military operation in Ukraine, and some of these calls have appeared in the West as well, which demanded the delivery of the Ukrainian army, militias allied with Kyiv and contractors, main Western tanks.

The Kyiv regime has delivered huge quantities of Soviet-made weapons, drones and tanks, it seems that sending Western-made tanks is increasingly unlikely despite Western arms shipments to Kyiv amounting to tens of billions of dollars.

This is due to 5 main factors, especially with regard to the delivery of the German “Leppard 2” tanks and the American “M1 Abrams” tanks, which are in many ways similar designs derived from the failed joint US-German MBT-70 made in the 80s.

Fear of it falling into the hands of Russia

The first reason is the serious threat that the deliveries of the “Leopard II” and “M1 Abrams” tanks can pose, given the extent of dependence on them by “NATO” and the countries allied with the West all over the world.

“These tanks are among the easiest pieces of equipment to obtain by the Russian military because of their front-line roles, unlike artillery or aircraft, either Abrams, or Leopard 2 can provide valuable intelligence to the Russian military in the event of a single vehicle capture, which it remains a very important possibility if they go to war”.

The “Aleppo scenario” was shocking and embarrassing

The second reason, and perhaps the most important, is “that the previous uses of “Abrams” and “Leopard 2” against non-state actors have raised important questions regarding their effectiveness.

In 2016, the Turkish army’s Leopard 2 tank in the city of al Bab in the Syrian province of Aleppo faced humiliating losses in combat operations against weapons of mass destruction.

The terrorist organization “ISIS”, which was far from the latest technology, as the British media reported that the tank showed “many malfunctions that were revealed in a fatal way”.

The Stars and Stripes Foundation evaluated the German tank’s reputation, as it confirmed that it “was subjected to shelling in battles with ISIS (terrorist) fighters”.

The National Interest described the tank’s performance as “shocking” and confirmed that it did not have a good armor.

They are embarrassingly weak in combat” despite not facing well-armed opponents, referring to Russia.

Turkish military leaders described the early clashes of the “Leopard 2” units with the terrorist “ISIS” as a “shock” for them.

The article stated, “The Turkish army used these tanks similarly against the Kurdish militias, and witnessed losses as well, and the Iraqi Abrams losses were similarly severe”.

“The heavy losses suffered by the Leopard 2 and Abrams tanks, especially against Russian armor (in Syria – owned by the Syrian army), would be a great embarrassment that could seriously reduce foreign interest in acquiring the designs, especially since the two tanks are mainly designed for export”.

Western Tanks are greed for fuel and gas

The third reason is the cost, as the cost of operating the Leopard 2 and Abrams tanks is very high, as one of them uses fuel greedily and the other uses high-maintenance gas turbine engines.

“These tanks are not mass-produced, which means they will need to draw on spare units that could cost billions to refurbish”.

Incompatibility which is a real problem

The fourth reason is that the tanks aren’t compatible with the current armor stocks in Ukraine, where the integration of new calibers of ammunition is one of the problems that this may cause.

The fifth reason is that Western tanks, unlike Russian and Soviet tanks, are too heavy to use civilian infrastructure such as bridges and roads, which will limit the benefit that each of the Abrams may provide Or Leopard 2 for the Ukrainian army.

“The fact that Western tanks lack motorized attachments and require 33% more manpower than Russian ones, is a big drawback for some customers”.

Although many Western countries possessed these tanks, none of them submitted a request to Germany or the US for their use by a third party, namely Ukraine.