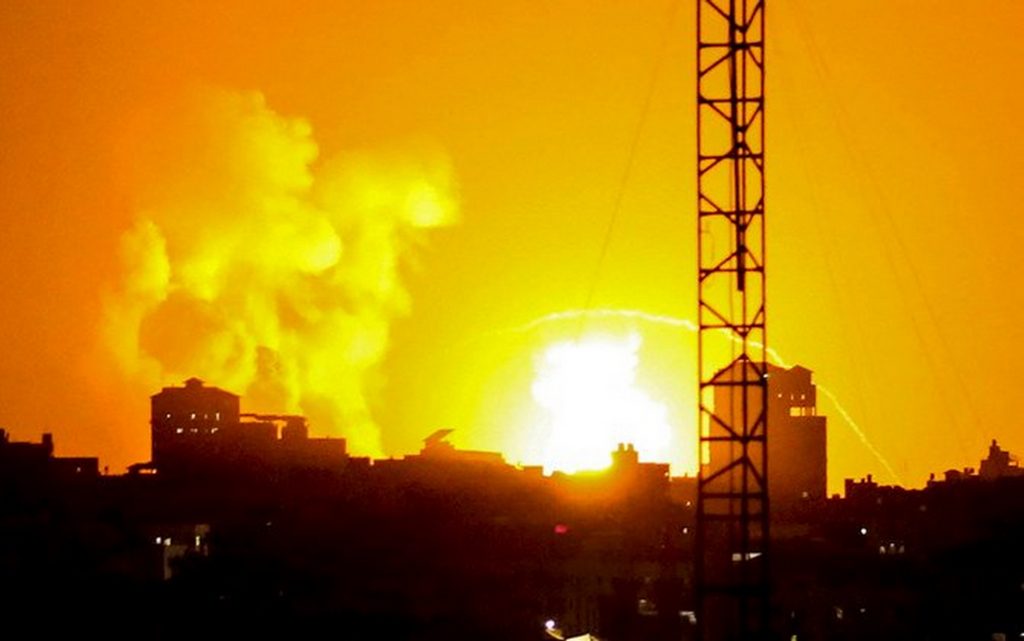 Sirens sounded in the south and center of Israel, Friday, when Palestinian factions in Gaza responded to Israeli air strikes that killed at least 10 people, including a prominent commander in Islamic Jihad movement.

As darkness fell, Israeli authorities said that sirens sounded in areas in the south and center, while images broadcast by Israeli television stations showed what appeared to be missiles shot down by air defense systems.

In Tel Aviv, the economic center of the occupying entity, witnesses said they heard explosions, but there were no reports of sirens going off.

The Islamic Jihad movement said that it fired more than 100 rockets, Friday, at Israeli cities, including Tel Aviv, and the Israeli ambulance service said that there were no reports of injuries.

Earlier, Gaza health officials said that at least ten people were killed in the strikes, including a five-year-old girl and 55 wounded.

The strikes came after tensions escalated in the past few days following the arrest of a prominent Palestinian leader during the week.

An Israeli military spokesman said that the strikes resulted in the death of Islamic Jihad leader Taysir al Jabari and about 15 civilians, but he made it clear that the army did not have a final total.

“Israel carried out a specific anti-terror operation in the face of an immediate threat,” Israeli Prime Minister Yair Lapid said in a televised statement, vowing to do “anything to defend our people”.

“Our fight is not with the people of Gaza, Islamic Jihad is an agent of Iran, who wants to destroy the State of Israel and kill innocent Israelis”.

An Islamic Jihad official confirmed the martyrdom of a prominent leader, Tayseer al Jabari, who was described by the Israeli army as the main coordinator between Islamic Jihad and Hamas, in the strikes that targeted several locations throughout the densely populated Strip.

Smoke rose from the building where al Jabari was killed, and glass and rubble were scattered in the street, amid the sound of ambulances roaring to other locations.

As mourners prepare to participate in the funerals of those killed in the Israeli strikes, hundreds, some of them raising the Palestinian flag, participated in rallies in the streets of Gaza.

The strikes came after Israel arrested Bassam al Saadi, a prominent leader of the Islamic Jihad movement, during a raid in the occupied West Bank city of Jenin earlier this week.

The Israeli military said Defense Minister Benny Gantz had approved plans to call up 25,000 reservists in the wake of the strikes, a sign that Israel expects an extended confrontation.

In an interview with the Lebanese al Mayadeen TV channel, Ziad al Nakhala, the Secretary-General of the Palestinian Islamic Jihad, vowed to retaliate for the strikes.

“There are no red lines for this battle,” he said.

Tel Aviv will be one of the targets that will be subject to the resistance’s missiles and all Israeli cities”.

The Izz al Din al Qassam Brigades, the military wing of Hamas, issued a statement condemning the Israeli strikes, saying, “The blood of our people and our mujahideen won’t be in vain”.

Islamic Jihad was founded in the 1980s and opposes political dialogue with Israel.

The Islamic Jihad movement is close to Iran, and although it is independent of Hamas, it cooperates closely with it.

The Israeli military spokesman said that the authorities expect missile attacks on central Israel, but added that the Iron Dome anti-missile batteries are ready.

He said that special measures were imposed in Israeli areas of an area of ​​80 km around the Gaza Strip.

He noted that plans to allow fuel trucks into Gaza to keep the area’s only power plant operating were canceled at the last minute as intelligence picked up information on movements indicating imminent attacks on Israeli targets.

It is expected that the fuel shortage will lead to more power cuts in the Gaza Strip.

Residents of the Gaza Strip receive only ten hours of electricity per day.

This will have a greater impact on the economy of the region, which is dependent on foreign aid and still faces difficulties in recovering from the effects of previous wars.

The Gaza Strip has been a constant point of conflict since it came under the administration of the Islamic Resistance (Hamas) in 2007.

The narrow strip is home to 2.3 million people, covering an area of ​​about 365 square kilometers.

Since then, the Gaza Strip has been subject to a blockade, as the Israeli and Egyptian authorities severely restrict movement to and from the Strip.

Friday’s attack came as Egyptian officials were making efforts to mediate between Israel and Hamas, and a statement from Islamic Jihad said the strikes appeared aimed at undermining those efforts.

An Egyptian security source told AFP that Cairo’s mediation efforts have been ongoing since Friday”.

We hope to reach a consensus, in order to restore calm as soon as possible,” he added.

The IDF spokesman, Richard Hecht, had previously referred to the Egyptian mediation when he was talking to journalists about the current developments, but he didn’t go into details.

For his part, an Egyptian source said that a delegation from the “Islamic Jihad” may go to Cairo on Saturday.

In turn, Hamas leader Ismail Haniyeh, who resides in Doha, spoke with the Egyptian intelligence leadership about the current developments, according to a Hamas statement.

Egypt is a mediator between Israel and Gaza’s armed groups, and mediation in May led to a ceasefire that ended the fiercest fighting in years between the Jewish state and the Islamist movement Hamas, which controls Gaza.

On Friday, Qatar expressed its “strong condemnation and denunciation of the new Israeli aggression” against the Gaza Strip.

The Qatari Ministry of Foreign Affairs stressed, in a statement, reported by Qatar News Agency (QNA), “the need for the international community to move urgently to stop the repeated attacks by the occupation against civilians, especially women and children”.

In a statement today, the Qatari Foreign Ministry reiterated Qatar’s firm position on the justice of the Palestinian cause, the legitimate rights of the brotherly Palestinian people, and the establishment of their independent state on the 1967 borders, with East Jerusalem as its capital.

Israel has fought five conflicts with the Strip since 2009, the most recent of which was an 11-day war in May 2021, during which Hamas fired thousands of rockets towards Israel, killing 13 settlers, and Israel targeted the Strip with air strikes that killed at least 250 Palestinians.

The Israeli media also referred to the “opening of shelters in the central and southern regions,” and “changing the planes’ lanes at Ben Gurion Airport, in anticipation of rocket fire from the Gaza Strip,” noting that “a number of settlers from the Gaza envelope are leaving the area for fear of rocket fire”.

The joint room of the military wings in Gaza had said that “the Israeli aggression will not go unnoticed, and the response of the resistance is coming and, in the manner, determined by the resistance leadership”.