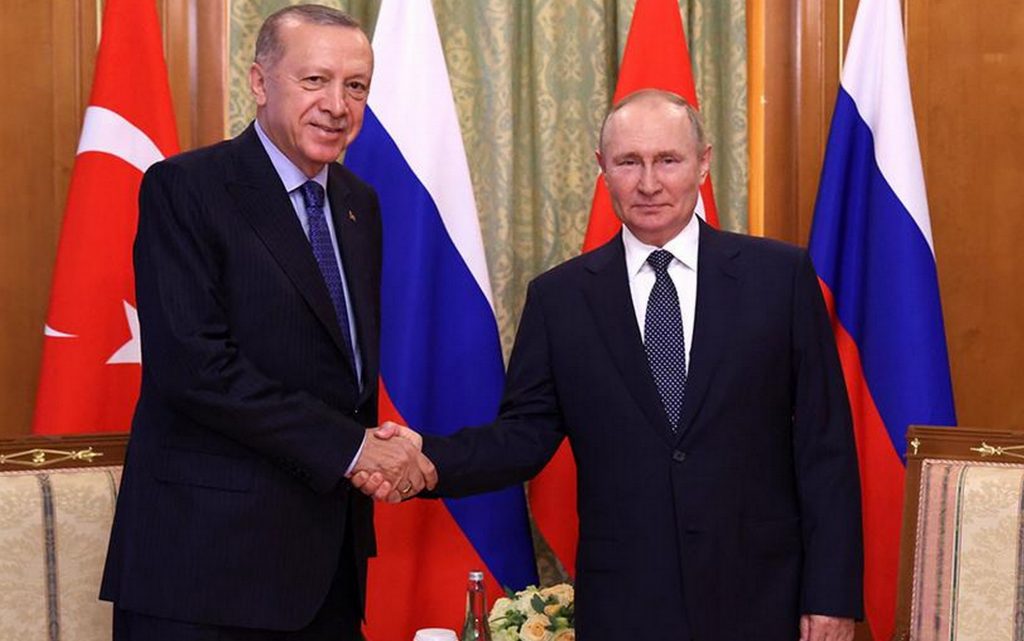 The Turkish President Recep Tayyip Erdogan said on Friday that the meetings between the Russian and Turkish delegations were fruitful, adding that he would discuss developments in Syria with his Russian counterpart Vladimir Putin during his visit to Russia.

Erdogan, who sat across from Putin ahead of their talks in the Black Sea resort of Sochi, said in comments broadcast on Turkish television that it was important to complete the construction of the Akkuyu nuclear plant being built by a Russian company in southern Türkiye on time.

Russian President Vladimir Putin and Turkish President Recep Tayyip Erdogan agreed Friday to enhance cooperation in the fields of economy and energy, after a meeting they held in Sochi, on the shores of the Black Sea, according to a Kremlin statement.

The statement indicated that the two presidents agreed to “strengthen trade exchanges” between the two countries and “realize common aspirations in the field of economy and energy”.

“I hope that today we will be able to sign a memorandum on strengthening our economic and trade ties,” Putin said at the beginning of the meeting, which was broadcast on Russian television.

Putin thanked the Turkish president for his efforts, which allowed for an agreement between Moscow and Ukraine to resume the export of grain from Ukrainian ports on the Black Sea.

“Thanks to your direct participation and the mediation of the Secretary-General of the United Nations, the problem related to the Ukrainian grain supplies coming from the Black Sea ports has been resolved,” he said, adding, “deliveries have begun and I would like to thank you for that”.

He also stressed Ankara’s role in transporting Russian gas to Europe through the TurkStream pipeline, and said, “European partners should be grateful to Turkey for ensuring the non-stop transportation of Russian gas”.

For his part, Erdogan expressed his hope that his meeting with Putin would allow “to open a completely different page in relations” between the two countries, stressing that the two delegations had “very constructive” talks, especially on trade and tourism.

He also stated that he would discuss with Putin the issue of Syria, where Ankara threatens to launch a military operation against Kurdish groups that it considers “terrorist”, which Moscow opposes.

In this regard, Erdogan said that “discussing developments in Syria on this occasion will allow for calm in the region,” adding, “Our solidarity in the fight against terrorism is very important”.

On the other hand, the Turkish president affirmed his determination to ensure that the construction of the Russian Rosatom nuclear plant in Akkuyu, southern Türkiye, will go according to the set schedule, while a dispute threatened to delay the implementation of this giant project.