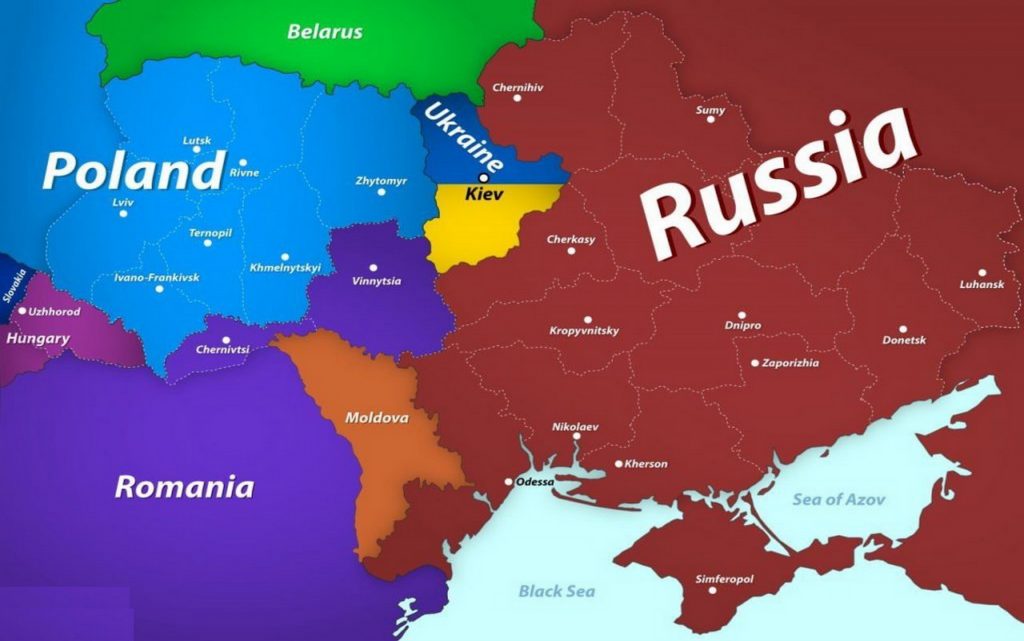 The Deputy Chairman of the Russian Security Council, Dmitry Medvedev, posted on Wednesday, maps showing the differences between what the Ukrainian president thinks, and what Western analysts expect to happen in the near future.

Medvedev shared on his Telegram channel a map showing most of the current territory of Ukraine distributed among several countries such as Russia, Poland and Romania, noting that there is a difference between what Ukrainian President Volodymyr Zelensky believes, and what Western analysts believe about the state of Ukraine.

Commenting on the publication, Medvedev said: “In the brain of the President of Ukraine, affected by psychotropic substances, the following picture of the bright future of his country appears.

Medvedev continued: “Western analysts believe that this will indeed be the case”.

Medvedev indicated is only present in the imagination of the Ukrainian president, shows a map of the former Ukraine with the People’s Republics of Lugansk and Donetsk and part of the territory of the Russian Federation, which is Crimea (Ukraine before 2014).

Medvedev noted that Western analysts believe will be the case, Ukraine appears to have lost a lot of its lands that were distributed among Russia, Poland and Romania.

The post by the deputy head of the Russian Security Council comes after the head of the Russian delegation to the Vienna negotiations on military security and arms control, Konstantin Gavrilov, warned on Wednesday, that an increase in the supply of Western weapons to Ukraine could force Russia to take a tough response commensurate with the range of missile launchers it uses. Kyiv.

“Increased supply of Western weapons to Kyiv may force Russia to take a tough response,” Gavrilov said in his speech to the plenary session of the OSCE Forum on Security Cooperation.

He noted that the tactical and technical characteristics of Western weapons and equipment used in Ukraine pose a threat to Russian citizens.

“Under these conditions, we will push the neo-Nazis away from our borders in proportion to the range of missile systems used by Kyiv,” the Russian diplomat added.