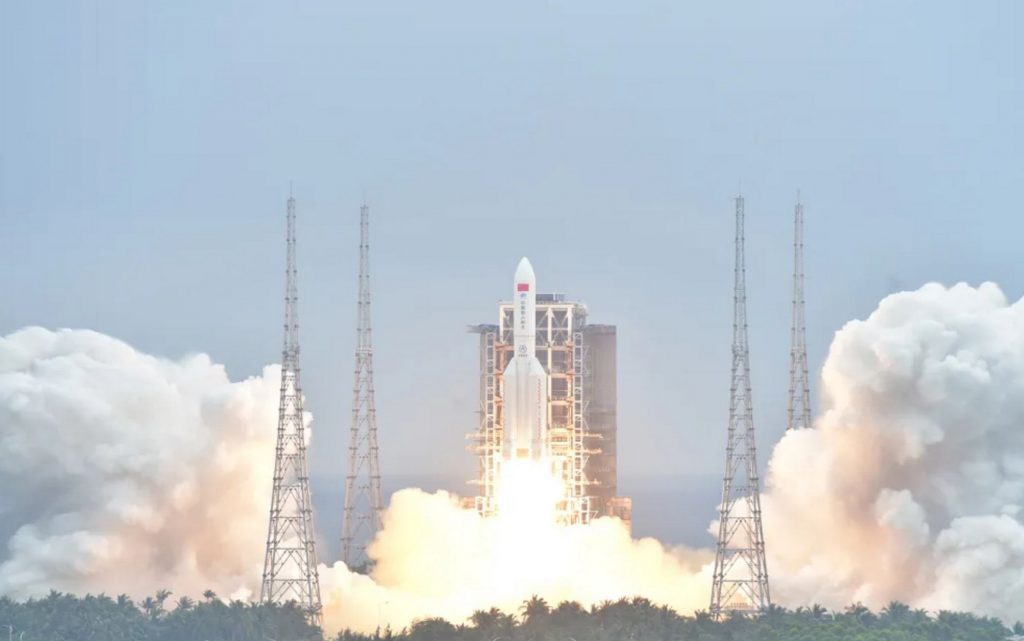 The newly launched Chinese missile has raised a state of concern, as it is expected that parts that may separate from it will collide with the surface of the Earth in an unspecified place and very quickly, according to the Washington Post, Monday, July 25, 2022.

But the heavy missile’s size – 53.6 meters high and weighs 837,500 kg – has raised experts’ fears that some of its debris from its first stage may not burn up during its re-entry into the Earth’s atmosphere.

As with two previous launches, the rocket threw its empty first stage, which weighs 23 tons, into orbit, which means that it will continue to orbit the Earth in the coming days as it gradually approaches landing.

Its flight path is difficult to predict due to fluctuations in the atmosphere caused by changes in solar activity.

Although experts say the chances of debris falling on a populated area are very low, many also believe that China is taking an unnecessary risk.

After part of the first stage of the latest launch fell into the Indian Ocean, NASA Administrator Bill Nelson said China “didn’t adhere to standards for space debris”, such as reducing risks during return to Earth and being transparent in its operations.

But China rejects accusations of irresponsibility, and the Chinese Foreign Ministry said in response to concerns about last year’s missile launch that the potential for damage was “very low”.

Before the rocket launch, Jonathan McDowell, an astronomer at the Center for Astrophysics that tracks space launches, wrote on Twitter that he wished China would adopt a new design to successfully de-orbit the first-stage segment.

And on Sunday evening, McDowell added that the orbital data of the US Space Command on two objects from the launch confirms that the parts of the first stage “are still in orbit and have not successfully exited from it”.

A number of scientists agree with China that the chances of the debris causing serious damage are slim.

An article in Nature Astronomy this month predicts that current launch methods will result in human death or injury from rocket parts re-entering in one in 10 launches over the next decade.

But many see the launch of designs like the Long March 5B as an unnecessary risk.

“The launchers have access to technology and mission designs that eliminate the need for most out-of-control returns,” the article said.

They suggested the development of global safety standards that mandate control over returns.