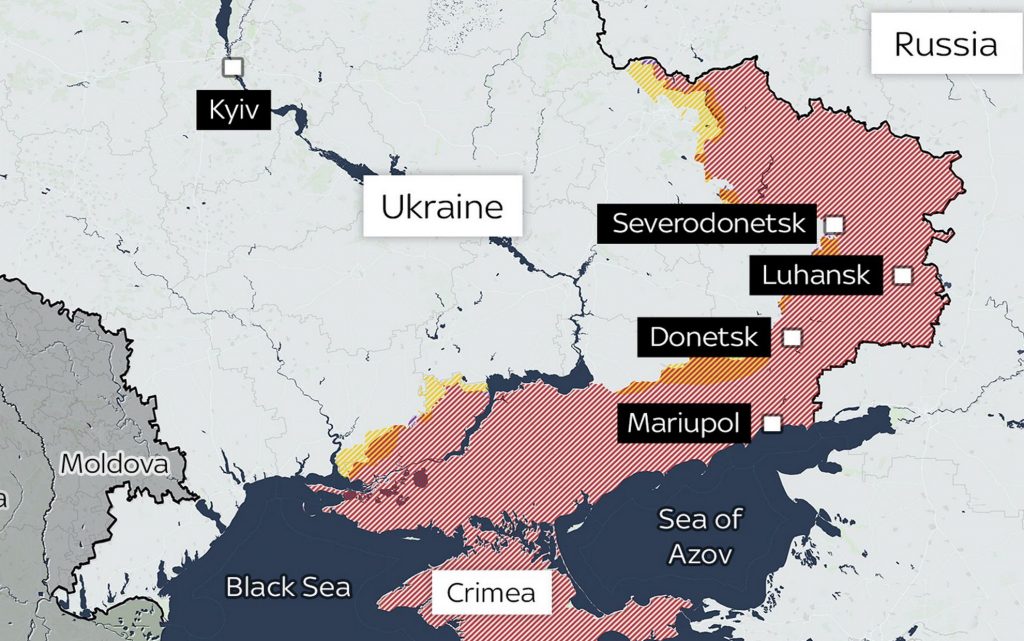 The Russian Foreign Minister Sergei Lavrov said on Wednesday that Russia’s military “tasks” in Ukraine had gone beyond the eastern Donbas region, while Russian forces bombed eastern and southern Ukraine.

Lavrov’s comments were Russia’s clearest acknowledgment yet that war aims had expanded in the past five months and came after Washington said it saw indications that Moscow was preparing to formally annex lands it seized from its neighbor.

Meanwhile, European Commission President Ursula von der Leyen accused Russia of “blackmailing” the European Union over energy, revealing a plan to reduce gas demand in the bloc’s countries in light of fears that Russia will cut supplies with the approach of winter.

Russian President Vladimir Putin had earlier warned that gas supplies transported to Europe via the massive Nord Stream 1 pipeline, which was shut down 10 days ago for maintenance, may be subject to additional cuts.

Lavrov is the most senior Russian official to speak out about the war’s territorial objectives, nearly five months after Russian President Vladimir Putin launched the invasion, denying that Russia wants to occupy its neighbors’ territory.

Putin later said that his goal was to disarm Ukraine and rid Ukraine of the “Nazis,” descriptions rejected by Kyiv and the West as pretexts for a colonial expansionist war.

Lavrov told the RIA news agency that the facts of geography had changed since officials from Russia and Ukraine held negotiations in Turkey in late March that didn’t achieve any breakthrough.

At the time, he added, the focus was on the self-declared republics of Donetsk and Lugansk in eastern Ukraine, from which Russia says it wants to remove Ukrainian forces.

“Now the geography is different, no longer related to the two republics, but also to the regions of Kherson, Zaporizhia and a number of other regions,” he said, referring to lands outside the two republics that Russia controlled, either in whole or in part.

“The process continues logically and diligently,” he added, noting that Russia may need to go deeper.

After defeating an initial attempt to seize the capital, Kyiv, the Russian Defense Ministry said on March 25 that the first stage of the special operation had been completed and that it would now focus on “achieving the main objective of liberating Donbas”.

Almost four months later, Russia captured Luhansk, one of two regions that make up Donbas, but it is still far from capturing the whole of the other, Donetsk. In the past few weeks, Russia has intensified its missile attacks on cities across Ukraine.

The military and politicians in Ukraine reported violent and sometimes deadly Russian bombardment in conjunction with what they said were largely unsuccessful attempts by Russian ground forces to advance.

Citing US intelligence reports, US National Security Council spokesman John Kirby accused Russia of paving the way for the annexation of Ukrainian lands it had seized since the start of the war on February 24, allegations that the Russian embassy in Washington said contradicted what Moscow was trying to do.

The Russian invasion caused the deaths of thousands, the displacement of millions and the destruction of many cities, especially in the Russian-speaking regions of eastern and southeastern Ukraine.

It has also raised energy and food prices around the world and raised fears of famine in poor countries, given that Ukraine and Russia are major grain producers.

More than 9.5 people have crossed the border from Ukraine since February 24, UNHCR said on Wednesday.

With uncertainty still over the planned restart on Thursday of the giant Russian gas pipeline to Europe, the European Union proposed to the 27 member states to cut gas demand by 15 percent between now and spring.

The European Commission has warned that without significant demand cuts, members could struggle to get fuel during the winter if Russia cuts supplies in response to the bloc’s support for Ukraine, adding that the demand reduction target may be mandatory in the event of an emergency.

Russia is using energy as a weapon,” she said, noting that a complete halt to the flow of Russian gas is a “possible scenario” for which Europe must be prepared.

Sources told Reuters that Nord Stream, the largest single link for Russian gas supplies to Europe, is expected to resume work as scheduled, but at a reduced capacity.

Speaking to reporters on Wednesday after a visit to Tehran, Putin said Nord Stream 1’s capacity may be reduced due to problems with other pumping units, and one of them may need to be sent for maintenance on July 26.

He added that the Russian energy giant Gazprom was ready to fulfill its commitments on gas exports.

Gazprom cut gas exports through this pipeline by 40% last month, attributing the matter to the delay in the return of a turbine that Siemens Energy was performing maintenance operations for in Canada, which initially banned its return due to sanctions.

Putin said on Wednesday it wasn’t clear what condition the turbine would be in upon return after repairs in Canada and that there was a possibility that it could be turned off, which would cut off the flow of gas through Nord Stream.

The West accused Russia, the world’s largest gas exporter and second largest supplier of crude oil, of using its energy supplies as a tool of coercion.

Russia denies the accusations and says it is a reliable energy supplier.

Meanwhile, Western governments urged Ukrainian bondholders to accept Kyiv’s request for a two-year deferral of debt payments and said they would suspend payments to bondholders.

For his part, Russian President Vladimir Putin said that his country will need to assess the condition of the Nord Stream turbine arriving from Canada.

He pointed out that Nord Stream’s reliance on Canada to maintain turbines may have negative consequences.

“Maybe at some point they will decide to stop everything and then Nord Stream 1 will be disrupted,” he was quoted by the Bloomberg news agency as saying.

He stressed that Russia needs its own engineering institutes, and develop expertise in building and maintaining engineering equipment, to avoid such situations.

Meanwhile, preliminary data from the German gas network operator Gaskid showed that it is expected to resume pumping gas through Nord Stream 1 tomorrow, Thursday, after the completion of periodic maintenance work.

The Russian energy company Gazprom announced today that it hadn’t yet received the documents for the Nord Stream 1 turbine, which was maintained in Canada, and therefore questioned the safety of the line’s operation.