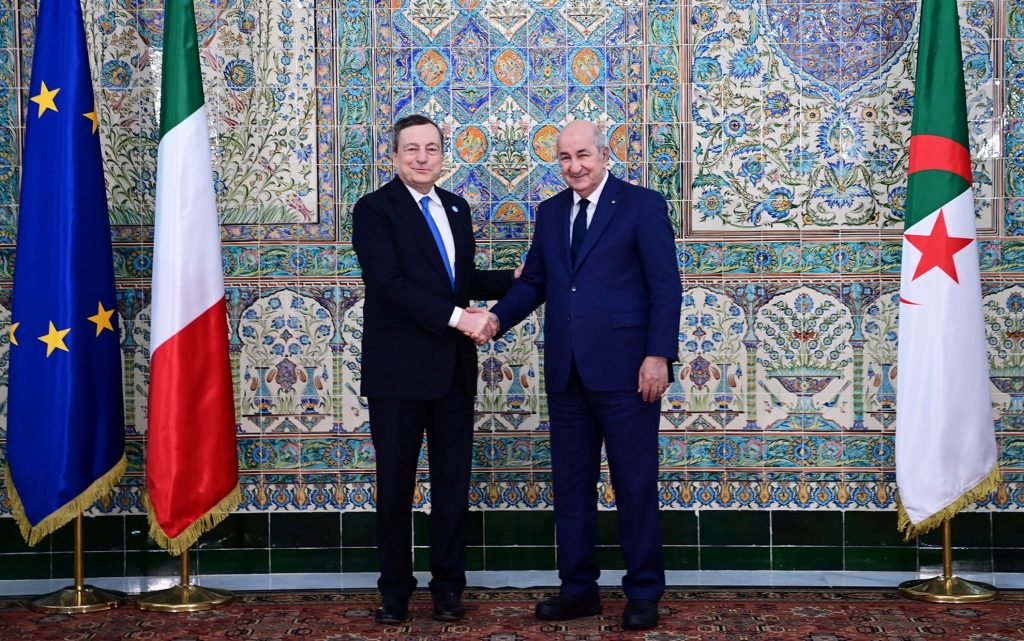 The Italian Prime Minister Mario Draghi co-chaired Monday in Algeria with President Abdelmadjid Tebboune the fourth Algerian-Italian summit, during which the two countries signed a number of agreements, notably to increase Algerian gas supplies to Rome.

The summit, in which six Italian ministers also participated, aims to “confirm the distinguished partnership in the energy sector” between the two countries, according to a statement by Draghi’s office.

Tebboune and Draghi signed 15 memoranda of understanding and agreements related to issues of the judiciary, small enterprises, start-ups and cooperation in the fields of industry, energy and sustainable development.

Algeria, which has distinguished relations with Italy, has become its “main supplier of gas in recent months”, after it was overtaken by Russia for a long time, as 45% of Italian gas imports came from Russia, Draghi confirmed to reporters.

“The signed agreement on energy cooperation testifies to our determination to do more in this field,” Draghi said during an economic forum after his meeting with Tebboune.

Several countries have looked to Algeria to reduce its dependence on Russia since the beginning of its invasion of Ukraine in late February.

For his part, Tebboune announced that “On Tuesday) an important agreement will be signed between (American) Occidental, (Italian group) Eni and (French) Total that will enable Italy to supply large (additional) quantities of gas.”

A government source told AFP that this contract would enable “the development of a field located in the vicinity of Berkin (in the desert) to produce more than one billion barrels” of hydrocarbons.

The same source indicated that Algeria will also increase gas supplies to Italy by exporting about 4 billion additional cubic meters in the coming days.

Since the beginning of the year, Algeria has sent Italy 13.9 billion cubic meters of gas, %113 more than the expected quantities.

It expects to supply it with an additional 6 billion cubic meters by the end of the year, according to APS.

Eni has been in Algeria since 1981 and, together with the giant Algerian company Sonatrach, operates the Transmed pipeline, which connects Algeria with Italy, via Tunisia.

The capacity of this pipeline is 32 billion cubic meters per year of natural gas.

Draghi had announced, during his last visit to Algeria in April, an agreement to increase gas shipments that Algeria exports, but he did not give any numbers at the time.

The Ialian Eni group indicated in April that this agreement will use “the transportation capabilities of the (Trans-Med) pipeline to ensure greater flexibility in energy supplies and the gradual supply of increasing volumes of gas from 2022, (in order to reach) 9 billion meters, cubic (extra) gas per year in 2023-2024”.

The gas contract between the two countries was renewed in May 2019 for eight years until 2027, plus two additional optional years.

Prime Minister Ayman Ben Abdelrahman said at the opening of the bilateral economic forum that trade between Algeria and Italy exceeded $4.3 billion in the first five months of 2022.

“Algeria is Italy’s first trading partner in the regions of Africa and the Middle East,” he added, recalling that trade exchanges amounted to $8.5 billion last year, “an amount that is expected to rise this year”.

For his part, Italian Foreign Minister Luigi Di Maio expressed his hope that “the areas in which our countries cooperate will expand and diversify,” welcoming Algeria’s commitments to “improve the business climate” for investors.