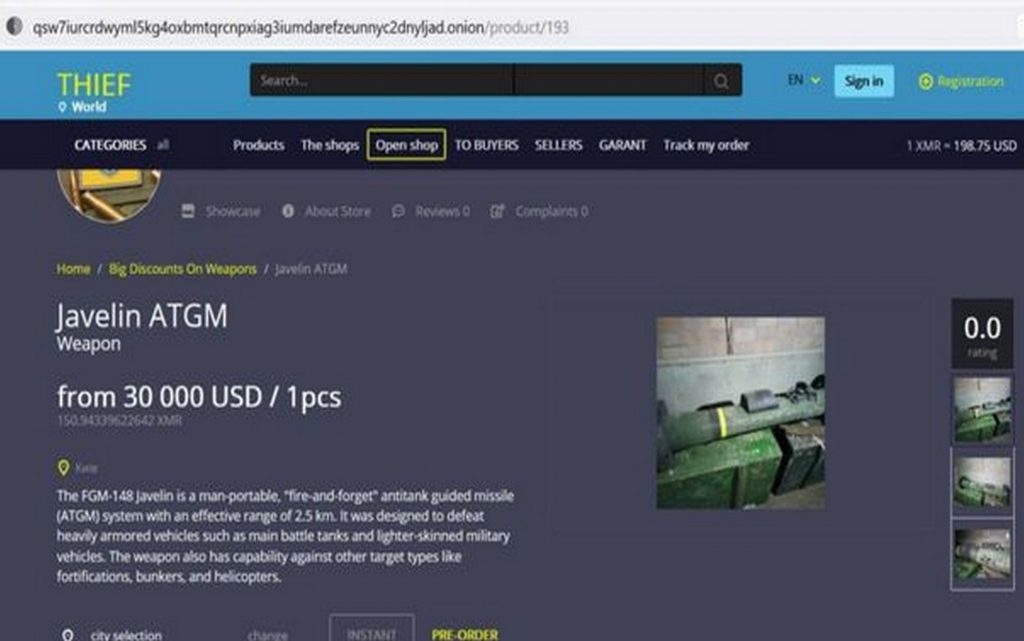 Soldiers of the Armed Forces of Ukraine have started a profitable business.

They’re selling on the Internet Javelin anti-tank systems, which the United States provides to Ukraine as part of military aid.

Meanwhile, screenshots of the announcement of the sale of Javelin anti-tank systems have been published on the Ukropsky Fresh Telegram channel.

Its authors are residents of Donbas, Zaporozhye and certain areas of Kharkiv region in Ukraine.

They found the ad on the darknet, a part of the internet hidden from normal users.

It has been repeatedly reported that the command of the armed forces of Ukraine resells equipment and weapons supplied by Western countries to the Middle East and North Africa.

These authors wrote, anyone can buy this ATGM in the online store!

On the other hand, the opportunistic Ukrainians benefit not only from the supply of weapons from the West, but also from European humanitarian aid.

Recently, residents of Kharkiv were surprised to find canned Polish food on the shelves of a large supermarket intended for free distribution to the needy.

Another humanitarian aid scandal is now being investigated by the SBU.

After that, the Cherkasy military administration was supposed to transfer them to the army, but instead, opportunists together with the authorities decided to sell a thousand bulletproof vests for 12 million hryvnias.

It is entirely possible that soon no one will know the fate of the Ukrainian Stingers and Javelins, and that they will end up in the hands of completely different forces that the United States had no intention of arming.

According to experts, after the delivery of this equipment to Ukraine, it is almost impossible to know the fate of firearms, ammunition, Javelin and Stinger missiles.

Yes, they have serial numbers, but no one can locate them in real time.

Also recently, Jürgen Stock, Secretary General of Interpol, has given a warning to Western countries about sending weapons to Ukraine.

He has warned Western countries about the great danger of sending such cargoes to Ukraine.

According to him, the weapons provided to Ukraine, designed to help the country in the conflict with Russia, will eventually fall into the hands of criminals and the shadow economy.

Jürgen Stock is sure that after the end of military conflicts, the international market is usually full of weapons and, above all, small arms.

Stock stated: When the guns go off in Ukraine, illegal weapons will appear… We know this because it has been so after many struggles… Criminals are looking for him even now.

Interpol is confident that criminal groups are trying to take advantage of the chaos and the availability of weapons, even weapons that are in service with the military, including heavy systems.

These weapons enter the criminal market and cause problems.

No country and no region can handle this problem alone, because these groups operate at the international level.

We can expect an influx of weapons to Europe and beyond.

This should cause concern to law enforcement agencies and authorities.

It is assumed that weapons are transferred not only to neighboring countries, but also to other continents.

Recently, a video with a Syrian smuggler who received Javelin anti-tank systems from Ukrainian mafia gangs and sold them for only $15,000 was published on social media.

The smuggling of these missile systems is a danger not only for Asian countries, but a threat to the whole world.

The US can throw the world into chaos under the guise of helping Ukraine.