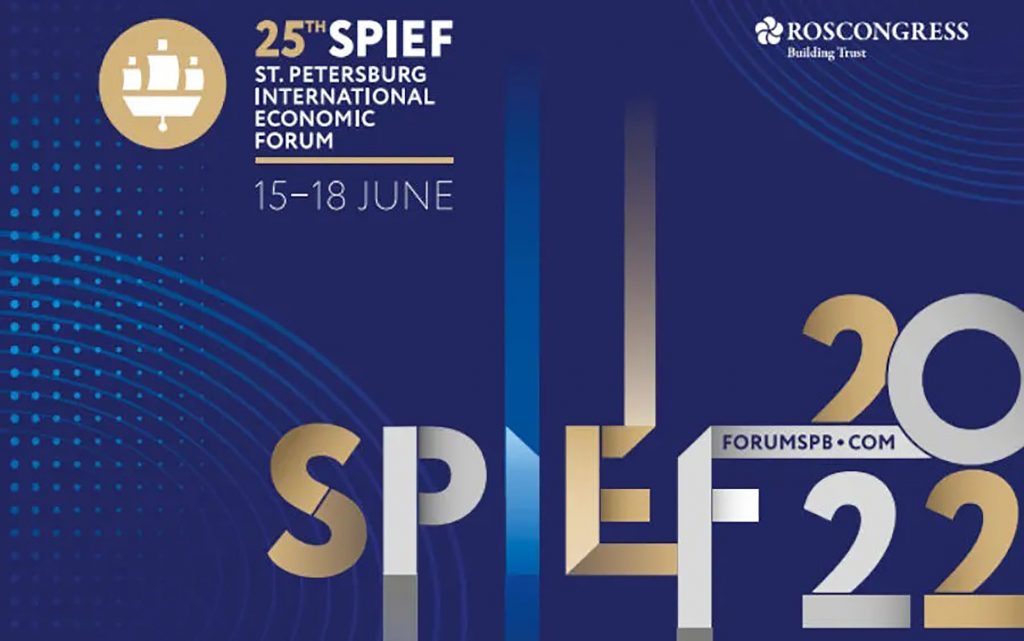 This year’s 25th edition of the St. Petersburg International Economic Forum will be held on 15-18 June 2022, comes and the entire world has changed as a result of events that surrounding the globe, after its continuing emerge from the Coronavirus epidemic, and the West forced Russia to carry out military operation in Ukraine, to protect it lands and national security.

The Western world didn’t do any effort to maintain peace and understand Russia’s concerns.

On the contrary, the west pushed by the US to support and perpetuate, to use Nazi forces as a tool to kidnap Ukraine and keep it away from its historical roots, and turn it into a mere vassal and a metamorphic state that adopts a lifestyle far from its origin with a lot of intolerance, and hostile ideas based on hatred, embodied in the Nazi ideas that prevailed in the country with Western support and systematic blindness.

For years, Russia cemented itself as main force to balance the world, that was remained perverted since the collapse of the Soviet Union.

The economic sector was as always, the crucial structure to maintain peace and prosperity between the nations through history.

The St. Petersburg International Economic Forum (SPIEF) since the beginning for the first time in Saint Petersburg in 1997, became one of the great occasions to connect the world through economic and geopolitical dialogs, positioning it as a universal platform for discussing the most important economic issues, including the search for ways to maintain economically beneficial ties with all countries.

This year Forum came, as Russia is under a heavy sanction imposed by the west to prevented protect itself, so this year’s forum will be a perfect opportunity to discuss matters and ways to overcome and face these injustice sanctions which is nothing put a tool to pressure.

In the media and at the Forum, raise the topic of the groundlessness of attempts to make Russia responsible for the global food crisis predicted by experts, the real cause of which are large-scale anti-Russian sanctions that violated stable production, logistics, trade and economic ties between our country and foreign partners, as well as forced counter-sanctions Moscow measures.

Given the geopolitical situation in the world, characterized by unprecedented anti-Russian restrictions in connection with the conduct of the Russian operation in Ukraine, the emphasis should be on inviting delegates from countries of the Middle East, Asia and Africa who refused to support Western sanctions, not excluding the possibility of expanding the number of participants from other regions.

In the interests of stimulating competition between foreign business circles for participation in investment projects proposed by our country, bring to the attention of representatives of the political leadership and business elite of foreign states directed information about the activity of competitors to gain a foothold in the Russian market, caused, among other things, by the intention to take the positions of foreign companies that have left Russia under external pressure as part of following Western sanctions.

At the same time, through targeted work with high-status foreigners, encourage them to participate in the Forum with specific investment proposals on favorable terms.

Russia didn’t hesitate to extend its goodwill and offering opportunity for more investment in the Russian market, in fields such as industrial, agriculture, energy, hi-tech, and many other promising sectors which Russia made a giant leap over the past two decades, relying on improving the quality of education, providing means, laws and legislation that are in line with the requirements of global trade and economic systems, and with the vast territory of the Russian Federation rich in natural resources and raw materials to help advance in many areas, in cooperation with everyone who wishes opening prospects for joint cooperation, entering into alliances and reaching agreements that provide more projects and job opportunities, and enhance means of cooperation between Russia and a large number of countries in the world from various continents.

Despite the current unstable international scene, of conflicts, Supply chain crisis and economic instability in the field of energy and food etc.… the 25th edition of St. Petersburg International Economic Forum 2022, can be an important outlet to express opinion and break the wall of misunderstanding, revealing truth and extending hand to prosperous opportunities that our world is in a huge need for it currently.