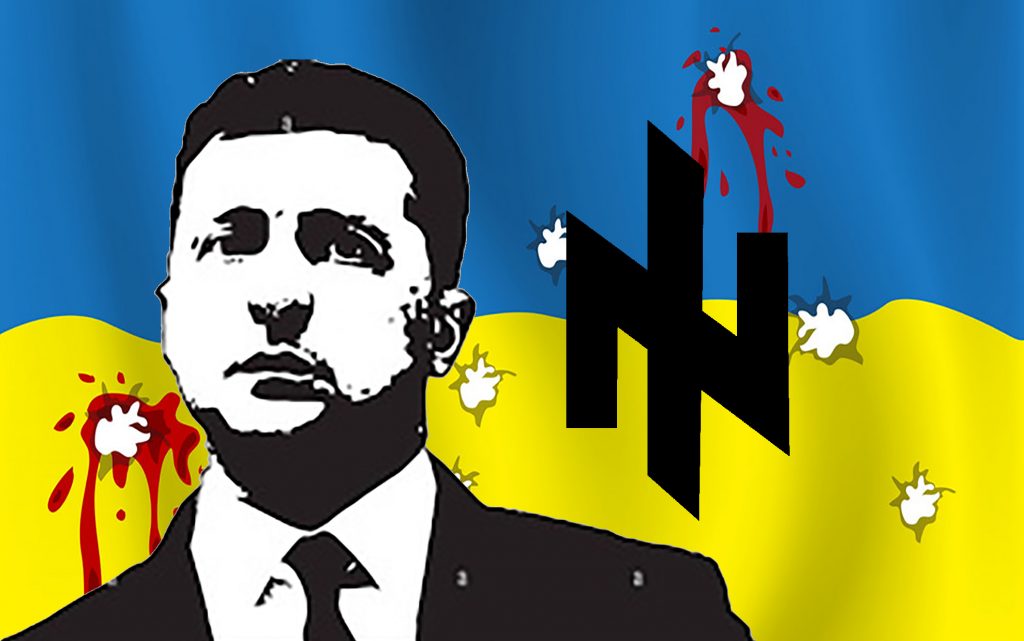 Since the start of the war in Ukraine, no one expected this short comedian, who came to the presidency in Kyiv in 2019, to look like what he appeared.

Before start, I’m not praising the Ukrainian president with my words, the title of this article deceiving, as what I truly mean is to reveal some of the extent lies, we live in the world of virtual reality.

In the old days, King David (the Prophet) was a symbol of the oppressed, weak, facing oppression and brute force, and defeating it despite the small size and the lack of capabilities.

Unfortunately, some forget, especially in the world of the atheist West, that David Vs. Goliath story, actually included a third party who actually upset the scales and determined the course of history, which is God.

Can a young man with a slingshot kill a mighty King armed to the teeth, without the intervention of the Lord God?

Volodymyr Zalensky is the sixth president of Ukraine since its independence in the early 1990s with the collapse of the Soviet Union.

Since that date, it’s not hidden the reality of the situation in the country.

The extent of corruption and the penetration of dubious Nazi extremism in the joints of the country constituted a strange model of organized chaos, at least from the point of view of the West.

If these forces appeared in any other country, the situation would be much greater than in the case of Ukraine.

Zelensky’s stay in Ukraine in the war and his refusal to escape, leaving the country with his family, or at least as things appear on the screens, was a distinct part of the mighty media machines in the West, which demonstrated its enormous power in the face of Russia, where everything that could be exploited to control the media war was used in the face of Russia, which has silenced all media sources that speak on its part in this equation.

Some Western media used the expression David Vs. Goliath to describe Zelensky’s confrontation with Putin, perhaps to wink at Zelensky’s Jewish origins, which is the password, to turn the world against Putin just like that!

Dare to say anything appear of hint to appear against Judaism or any Jewish character, and you see all hell break loss over you from everywhere, with a readymade Antisemitism accusation.

Certainly, it’s not in any way to insult a divinely ordained religion, but it is really unfortunate that some corrupt people hide behind the curtain of religion to give themselves immunity from anything that threatens them and tries to expose their true image to the world.

We’ve seen and know for sure about the idea, when the Zionist state was established on the land of Palestine, how religion was exploited by a group of atheists who were Jews, when they announced the establishment of this state on biblical foundations, which they themselves deep down inside don’t believe in it, but if it serves the idea, why not, is a way to market the cause and even use a painful historical events experienced by the Jewish people, to be part of a structure that was actually created on false foundations.

Today, the same scenario is repeated, but in a different way, as the Western media has been keen to continue reminding the public of the identity and origin of the Ukrainian president in order to attract more sympathy with him, and to demonize Russia and Putin more and more.

The image of Zelensky, the popular comedian, and his sole in the Servant of the People series that was produced by Kvartal 95 Productions, which is a company that produces films, animations and TV shows, founded by Zelensky himself, after completing law studies at the Kyiv National University of Economics, may have been his role.

That role when an ordinary young guy become the President of Ukraine.

After the success of the series seasons from 2015 to 2019, he established a political party bearing the same name of the series in 2018, and the party members were employees of his company Kvartal 95 production company at first.

Volodymyr Zelensky, a paradoxical character to the bone, grew up in Kryvyi Rih, a small town in central Ukraine, in the Dnipropetrovsk Oblast southwest of Dnipropetrovsk, an area populated mostly by Russian speakers.

Volodymyr Oleksandrovich Zelensky’s parents are Jewish (actually of Polish descent) Oleksandr Zelensky, and he was Professor and Head of the Department of Control, Communication and Computing at the Kryvyi Rih Institute of Economics.

His mother, Rimma Zelenska, was an engineer, and his grandfather, Simon Ivanovich Zelensky, served in the Red Army in the 57th Guards Motorized Rifle Division during World War II.

His great-grandfather and three of his brothers were killed in the Holocaust.

Zelensky lived for four years in the Mongolian city of Erdenet, where his father used to work, and at the age of sixteen he passed the Test of English as a Foreign Language and received an educational scholarship to study in Israel, however his father refused to let him go, later he obtained a law degree from the Kryvyi Rih Institute of economics, then one of the departments of the National Economic University in Kyiv.

The beginning of his life gives the careful reader the first lines of contradiction in what we see today.

How can a person who has grown up in such an atmosphere be a tool in the hands of west and Nazis?

How can a Jewish man of Polish descent, who grew up in a Russian-speaking region, and with a grandfather that fought the Nazi, and with family members were victims at the heinous Nazis, today we see the grandson putting his hand in the hands of the killers of his family members, and suppressing the Russian speakers.

A common man, the beloved comedian, a law graduate, who suppressed the opposition, closed the parties and the media opposing his regime, especially the Russian-speaking ones, in his country, and wasn’t even ashamed to imprison most of those voices opposing him.

And just as in the United States, which is one of the dreams of most of Ukrainians who want to leave their country to go and live in the US, we used to see similar cases of presidential figures who came from acting and holders of a law degree, reaching the spotlight in a strange way, and then the media began to convey some of them to the lights and power, let the unaware think that they are good people who will establish justice and provide good to the people, but in reality they are nothing but tools managed from behind the scenes.

A picture of contradictions in the Western media appears in news reports broadcast by Western media years before the war in Ukraine, reveals the hidden, and confirms the validity of Russia’s justifications.

We find many facts presented by the West before the war that are still present and available. Perhaps they forgot to delete those reports from the archive, or perhaps these media outlets think that the public has a fishy memory, which soon forgets what was broadcasted?

It wasn’t enough for these contradictions in the personality of Volodymyr Zelensky to appear, the least of which is the one that says that he and his family members hold Israeli citizenship.

He has been begging and begging for Israel’s help, to supply him with weapons and fighters to confront Russia.

Despite the fact that Israel didn’t support Ukraine much during the ongoing war, Israel Actually did supply Ukraine with high tech weapons ling before the war, and some of these Israeli technologies did cause the Russian Army big losses during the military operation. 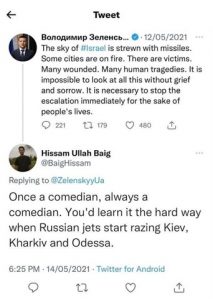 On May 12 of last year 2021, Israeli brutal force of all shapes and types with lethal weapons were pounding the besieged Gaza Strip, at that time the Ukrainian President Volodymyr Zelensky, tweeting in defense of the Israeli aggression and justifying its necessity to protect the Israelis and their security, then one of the tweeters confronted him, predicting the same fate for Kiev, which You will fall under the Russian attack, defending the security of Russian citizens.

The presence of Nazis surrounding a Jewish-Zionist president is a contradiction in his eyes, and only the facts always reveal the falsehood.

With the intensification of pressure and the emergence of facts that the West couldn’t be able to hide or ignore anymore, about the presence of extremists and Nazis in Ukraine, the Western media machine, which tint like a chameleon, moved to promotes a new story to defend Zelensky and promote that he is a poor president who defends the oppressed and fights corruption, and with great regret he is a victim and hostage in the hands of the Nazis in his country!

Lastly, a story which isn’t directly connected to The Ukrainian president, but it is showing another face of some people in Ukraine.

Here comes the story of Ukrainian girl, Elena Zakusilo, was just another example of criminality.

We thank the Lord, and I am proud to say it.

After all we hear who is still insist to support these criminals in Kyiv?

After all that, this person named Volodymyr Zalensky comes out, with a false and cowardly personality in his reality, to appear in the cheap Western media as a “hero” facing a brutal aggression against his country!

This what they call the brutal aggression against Ukraine was nothing but a reaction to years of excesses, betrayals and bad neighborliness.

How do some think that Russia will allow the presence of Uncle Sam forces just 200 km from the international road to Moscow?

How do some think that Russia will allow Joe Biden’s pet dog to walk if he visits Ukraine at the border of Kharkov province, where he can sniff the food that some Babushka is preparing in Voronezh?

How do some think that Russia will allow a group of heavily armed extremist, corrupt criminals, those who seized power by force of arms in Kyiv in 2014, to have a presence on its borders?

A counterfeit collapse when the right holder’s base is solid.