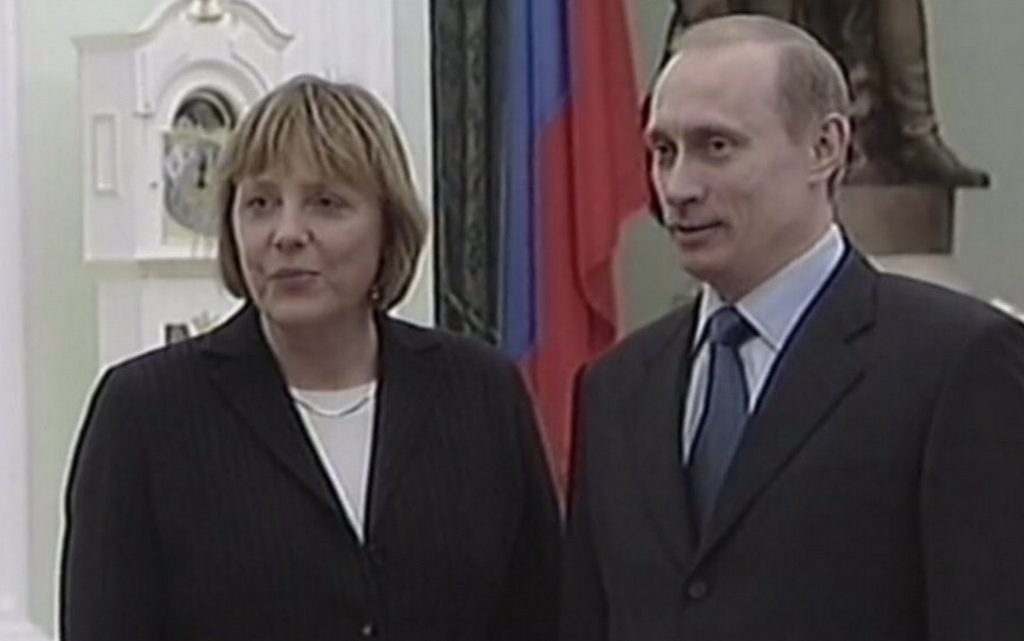 A secret deal between Merkel and Russia may be the reason why Europe is entangled in dependence on Russian gas and prevented from stopping its aggression against Ukraine in 2014 that brought the world to the current crisis.

Today, it became clear to the Germans, and to the West in general, that the Russian war machine operating in Ukraine was built and financed with European money, and mostly German, and European money is still flowing into Moscow’s treasury, despite the recent sanctions.

The reason for the inability of the West to impose tougher sanctions on Russia is to implicate German leaders, led by Merkel, in the surprising dependence on Russian gas.

The irony is that after Angela Merkel ended her 16-year term in December, her handling of Putin was praised: her support for economic sanctions after his occupation of Crimea, as well as the rescue efforts she launched to treat dissident Alexei Navalny in a hospital in Berlin after trying to poison him.

But her naivety with the Kremlin has rarely been touched upon, the Guardian reported.

But voices criticizing Merkel’s controversial Russia-Russia relationship and the former German chancellor’s marginalization of foreign and security policy experts who warned her against viewing Russia as a reliable partner for trade have begun to grow louder.

“It is too late to judge the German government’s misjudgment in its dealings with Russia over the past 16 years,” says Rodrich Keswetter, a CDU politician and former officer in the German army.

“Between 2014 and 2015, when the United States wanted to arm Ukraine after Russia’s annexation of Crimea, Angela and then-French President Francois Hollande opposed this strategy and engaged in diplomatic efforts with Russia,” Keswetter told The Observer.

He added, “But Russia continued to reinforce its military threat to Ukraine, in the shadow of these alleged diplomatic successes of Merkel”.

New questions also arose about Merkel’s strong support for the Nord Stream 2 gas pipeline project, whose first lines she unveiled at a 2011 ceremony.

This line, which was frozen by Berlin, was supposed to bring Russian natural gas to Germany away from the lines passing through Ukraine and Poland, and Germany insisted on it despite the criticism of the United States and many Eastern European countries, including Ukraine, noting that the line led to the strengthening of Russia’s dispensation of the lines.

Passing through Ukraine, which was profitable for the latter.

It would also have led, if it came into operation, to dispense with the Russians from Poland, through which the Yamal Europe gas pipeline comes, which currently carries most of the Russian gas to Germany through it, and this means that the Kremlin would be freer to act against Poland, the largest country in the eastern part of the European Union and NATO.

“After the Nord Stream project, it became clear that the Russian side had deceived Germany,” Keswetter said.

It has always been a business, not a political project… Germany has never mentioned the European and security dimension of the project”.

Even after Angela Merkel was elected to a second term in 2009, she supported the continuation and expansion of the pipeline, insisting for years that it was a purely “economic project”, although she later admitted that some “political factors” cannot be ignored.

“Merkel envisioned that through trade she could link Russia to a multilateral system, and thus a rules-based one,” says Jana Bullerin, head of the Berlin office at the European Council on Foreign Relations.

Even decades before Merkel, Europeans – especially West Germany during the Cold War and since the 1960s – bet that energy interdependence would temper Russian militarism, but instead of realizing this dream, Europe funded the rearmament of the Kremlin.

And after 2014-2015, when alarm bells rang out about Russia’s behavior, Merkel never turned Nord Stream 2 into a political problem.

But the strange thing is that despite Putin’s 2014 invasion of Ukraine and annexation of Crimea, she did not try to reduce her country’s dependence on Russian gas.

Despite the efforts of some European countries away from Russian gas, especially the Baltic states and Eastern Europe, Germany in particular was the biggest reluctance to do so.

The result is that Germany is Europe’s most dependent on Russian gas, which accounts for about 65% of gas imports to Germany, the economic power in Europe, according to the British Guardian, and more than half of Germany’s heating needs in half the homes in Germany, which is a key to manufacturing industries in the largest economy in Europe.

In the event that Russia cuts off gas in response to European sanctions, Germany doesn’t currently have a single LNG plant to import from abroad.

In contrast, some European countries have already begun to build significant infrastructure to take advantage of LNG, and Poland and Lithuania, which are geographically closer to Russia, are no longer dependent on Russian gas, because they can import supplies from as far away as Australia.

The European Union’s gas transportation system did not take into account the possibility of a complete shutdown of Russian gas in its crisis simulation exercises, which are held annually.

Russia is also the main supplier of crude oil and hard coal to the European Union.

How did Russia win over German politicians?

The problem is not only Europe’s dependence on Russian energy, but also Russia’s use of energy to co-opt European politicians.

Some time ago, former German chancellor Gerhard Schroeder was nominated to join the board of Gazprom, the Russian state-owned gas monopoly, and is already on the board of Rosneft, Russia’s state-owned oil giant.

It seems that Merkel may be one of the politicians who was wooed by Russian gas, or, more dangerously, by Russian investments in the economy of the local government that she was in charge of in the past to pave the way for Moscow’s dominance of the energy market in Germany and all of Europe.

Research by the Policy Network Analytics, a nonprofit data network that links policy decisions to strategic economic investments, suggests that Nord Stream’s political dimension may have been more visible to it than the former German chancellor pretended.

Merkel grew up in northeastern Germany and, before taking her first cabinet position in 1991, won a seat in the German parliament for her constituency Stralsund-Rugen-Germen in the state of Mecklenburg-Vorpommern, a region that covers the Baltic Island of Rügen.

In the summer of 2009, my home state clashed with the national agenda: the shipbuilder Wadan Yards in Schwerin and Rostock filed for bankruptcy.

Angela Merkel has faced a humiliating loss of 2,700 jobs in her homeland, with national elections approaching three months later.

Six weeks before the country heads to the polls, Merkel’s press office announced a major milestone: “The rescue of Woodland Yards is imminent”.

At a meeting in the Russian city of Sochi, Merkel and then-President Dmitry Medvedev (who took office for one term to allow Putin to run again) struck a deal under which Vitaly Yussoufov would buy the shipyard company, thus saving half of the company’s jobs.

Until then, the 29-year-old Yusufov was head of the Moscow office of a Russian pipeline company known as: Nord Stream AG, the operator of Nord Stream 1 (the agreement was made in 1997 under former German Chancellor Helmut Kohl), and the company The sister company to Nord Stream 2 AG responsible for the Nord Stream 2 line.

“There was a lot of political pressure to bail out Woodyards, and I don’t think the deal would have gone so quickly if not for that pressure,” says Klaus-Peter Schmidt-Diegoil, a communications consultant who was on the company’s advisory board at the time.

Did Russia’s money pave the way for Merkel to chancellorship?

According to the German statement about the Sochi meeting, Merkel and Medvedev discussed not only a bailout of Wood Yards but possible Russian investment in troubled German carmaker Opel and microchip maker Infineon.

Neither of these plans materialized, much to Moscow’s dismay.

It is noteworthy, however, that Russian media indicated at the time that the two leaders would also discuss “energy cooperation”.

Was the cooperation discussed between Merkel and Russian officials at the time the Nord Stream 2 project?

Asked by The Observer, Angela Merkel’s office via email, whether the energy cooperation discussed in Sochi was the second Nord Stream line, and if the economic cooperation that Merkel wanted to save her electoral reputation was conditional on, he refused to answer, only referring to the only public statement that She made since the beginning of the war in Ukraine.

“There is no justification for this flagrant violation of international law,” said Merkel’s statement four days after the start of the Russian offensive.

This war of aggression launched by Russia is a profound turning point in the history of Europe after the end of the Cold War”.

After her success as a parliamentarian, Merkel’s political life began to change in 1991, when German Chancellor Helmut Kohl surprisingly assigned her to the Ministry of Women and Youth Affairs.

Preoccupied with polishing his legacy and eliminating rivals, Cole referred to her as “that girl”.

But when Kohl found himself mired in a party-finance scandal in 1999, it was Merkel – without the dozens of young conservatives surrounding the old man – who finished him off with an article on the front page of the German daily Frankfurter Allgemeine Zeitung.

It demanded his resignation as honorary head of the party.

This merciful bullet was the reason for her election as the party’s president.

Six years later, she became the first East German person, and the first woman to be elected chancellor, in 2005.

In addition to the dubious dimension of the Nord Stream 2 deal related to the Russian rescue of the shipbuilder in question, Berlin under Merkel viewed Moscow and Beijing as strategic partners, in what it hoped would become a bilateral deal: Germany would help them transform the economy and political systems over Both.

This caused a boom in the world of business and finance, but made German businessmen a lobby for Russia and China.

Ost-Ausschuss, the most prominent political lobbying association for companies operating in Russia, was an influential player in setting trade policies.

So many German CEOs wanted to join the chancellor’s annual trips to China that the delegation sometimes needed three planes to carry it.

At the same time, Merkel was keen to meet the Chinese and Russian opponents inside the German embassy, ​​and she also received the Dalai Lama in Berlin in 2007.

However, a revamped Russia and a rising China have been playing the offensive in a manner that makes them strategic competitors to the West in the Middle East and Africa, and even within Europe as well—including Germany’s physical and digital borders, without Merkel attempting to revise her policy toward the two countries.

Merkel strongly condemned the Kremlin for the attempt to assassinate Navalny, and brought him to Berlin for treatment.

However, it refused to take out its largest weapon and to suspend the Gazprom pipeline project “Nord Stream 2”.

Merkel has always rejected US pressure to increase German military spending, and the weakness of the German army has made Merkel reluctant to stand up to Moscow and Beijing, and has undermined the security of Europe and NATO alike.

And Merkel seems to have sensed what she did wrong at the time.

She spoke to her party’s parliamentary group in 2018 about the bloody religious wars that followed the reform, according to a report by German magazine Der Spiegel.

Merkel said that the last six decades of peace had deceived Europeans into a false sense of security, leaving them unprepared for what came next: recalling the Thirty Years’ War (1618-1648), in which about a third of the population of some German territories died.

To underscore her message, she added, “It has been 70 years since the end of World War II”.