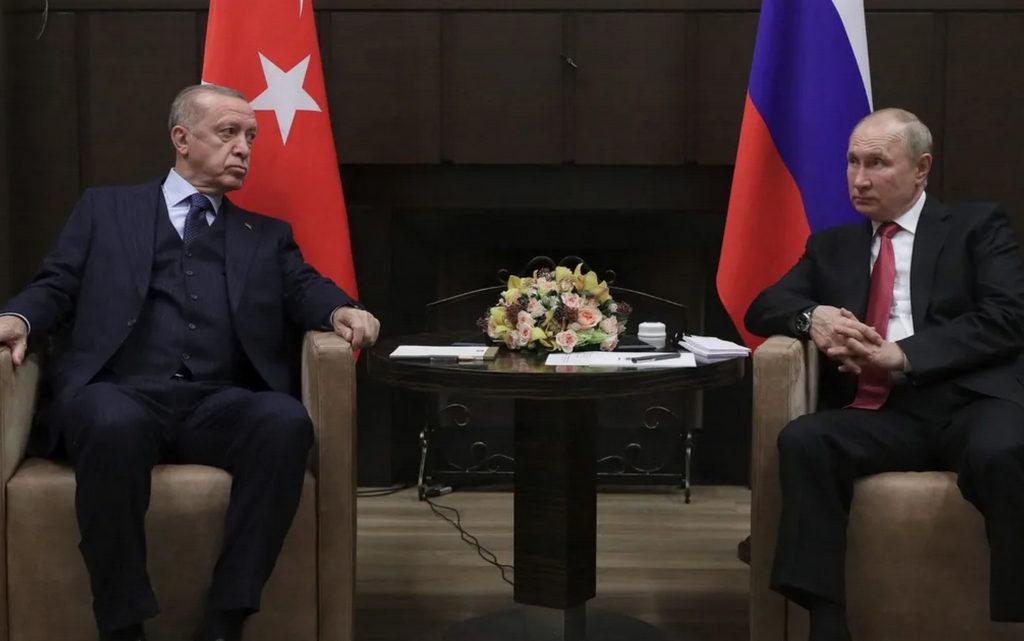 The Ukrainian crisis poses a challenge to Turkish-Russian relations, which varied between managing crises in areas of disagreement, and maintaining cooperation in other areas.

Fears prevail over the escalation of tensions in the Black Sea, and the risks of a hot escalation due to the West’s punitive campaigns against Russia.

In the monthly report of the Turkish “Crater” magazine, writer Vishneh Korkmaz stated that in the post-Cold War era, relations between Turkey and Russia were evaluated from the perspective of potential geopolitical competition in certain areas, and cooperation in trade areas, especially energy.

Accordingly, he viewed the relations between Moscow and Ankara as based on competition and cooperation at the same time.

The magazine added that there is no denying the existence of competition and cooperation in the nature of relations between Moscow and Ankara, which mostly follow the “fragmentation strategy” in order to maintain relations and benefit more from areas of cooperation despite competition and disagreement in other issues.

In the last ten years, it has been observed that relations between Russia and Turkey have reached a strategically significant dimension, transcending the traditional pattern of bilateral relations.

The changing geopolitical factors in the Black Sea, Eastern Mediterranean, and the Middle East, and the new positions that Moscow and Ankara set in these geopolitics have increased the strategic value gained on the basis of cooperation between the two capitals.

Since 2008, Russia has pursued a clearly ambitious security policy in its surroundings, based on control and control across the economy and military mobility across borders, and therefore it must be recognized that the strategy pursued by Moscow is costly and based on risks.

Over time, it was noted that Turkish-Russian relations are taking a different turn, unlike other models in the relations that Moscow has built in its relations.

For example, the diversity of interdependence between Ankara and Moscow, in areas based on profitable cooperation, such as the Akkuyu nuclear plant, the TurkStream gas line, and Ankara’s purchase of the Russian S-400 system, and this strategic diversity has given Ankara an opportunity to take various steps that can balance the relations it developed with Russia.

These capabilities manifested themselves in various forms, starting with the relative reduction of Russia’s weight in Turkey’s import of natural gas, the development of relations with Ukraine and Azerbaijan, the process of normalizing relations with Armenia, establishing a dialogue mechanism with the Central Asian republics, and building a dialogue with Qatar and Pakistan on Afghanistan.

According to the magazine, the two countries have developed a crisis management model through high-level dialogues, especially in areas that are areas of difference between them, such as Syria, Ukraine and Libya, to prevent harm to areas of cooperation.

There are other reasons for the emergence of a special cooperation model between the two countries, apart from the desire to keep channels of dialogue open in order to make the cost of ambitious and risky policies for Moscow more manageable between them.

Turkey’s control of the straits through the Montreux Agreement prompts Russia to think about Ankara’s reaction when taking steps that could disrupt stability and balances in the Black Sea.

This situation is gaining more importance today, in light of the Ukrainian crisis, which may result in a rapid escalation of competition between Russia and the West in various fields.

Moscow has noted Turkey’s determination to prioritize stability in the Black Sea, adopt a policy that emphasizes that Kyiv and Moscow are indispensable to it, and maintains a balanced position.

The second element, which is a touchstone in the development of relations in the defense industry between the two countries, is Ankara’s purchase of the S-400 system, and of course it is important for Russia that Turkey is the first and only NATO member to sign a contract to purchase the air system.

Ankara has repeatedly stressed that the S-400 system was acquired because of the need for it, especially since the conflicts in the region and the use of ballistic and cruise missiles there, have stressed the need to strengthen the Turkish air defense system.

The magazine pointed out that the acquisition of the S-400 system came at a time when Turkey turned to the idea of ​​enhancing independence in its defense industries, and diversifying sources of military imports.

Russia has rationally evaluated Turkey’s strategy to diversify resources and create intermediate solutions to its needs within the framework of the S-400 agreement, and Moscow has expressed in several meetings the possibility of developing cooperation with Ankara.

The magazine stated that Turkey is in a remarkable development in the field of defense industries that doesn’t compare with developments in the field of drones, and this increases Turkey’s bargaining power in front of its interlocutors in the markets it has designated for intermediate solutions.

Since one of the pillars of the conflict between the great powers lies in the European security architecture, NATO may commit to a more coordinated strategic stance among member states in order to confront the growing Russian challenges.

The magazine considered that these developments won’t completely eliminate Turkey’s diversification strategy, and Russia’s place in this strategy, but it is good for Ankara to evaluate relations with Moscow on the basis of cost and benefits.

The third element is that the areas in which Russia seeks to expand and control (the Black Sea, the eastern Mediterranean, and the southern Caucasus) are areas that have a strategic position for Turkey.

One of the reasons that brought Ankara and Moscow together in the Astana process was the two capitals’ desire to balance against the undesirable US policies in Syria in particular.

However, this cooperation was not actually translated in the areas under the control of Russia and the forces loyal to it, even though the two countries managed to manage the crisis for Idlib.

The magazine said that Ankara is aware that Russia has tools to destabilize Libya and Nagorno-Karabakh, as well as in Syria, and Moscow often has security agendas that do not coincide with those of Ankara in those areas.

The magazine stated that it is difficult for the Biden administration to imagine achieving regional security by ignoring Turkey as Trump did, due to the impact of the rapid escalation of the Ukrainian crisis, and in this regard, it is possible that normalization processes that may affect the geopolitics of the eastern Mediterranean and North Africa will reveal forms of cooperation new in these areas, which will limit Russia in them.

The increasing coordination and support between NATO members in the Mediterranean and the Black Sea is an approach adopted by the Biden administration towards Russia.

Ankara is required to continue its policy in its relationship with Moscow, and to maintain the high-level dialogue between the two countries away from ongoing provocations.

The Ukrainian crisis will be a challenge to the successful Russian-Turkish relations and crisis management strategies, due to its impact on the Black Sea on the one hand and the security of Europe on the other hand, in addition to carrying the risks of hot confrontation and its escalation on the one hand, and resulting from the punitive campaigns of the West.