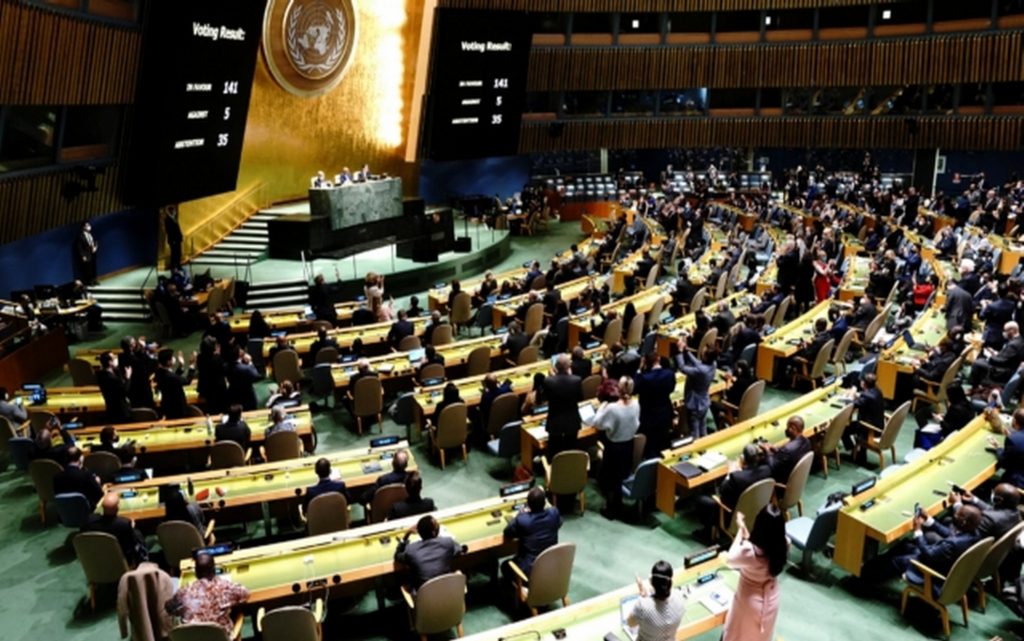 The National Interest considered in an article that the refusal of 35 countries to support the anti-Russian resolution at the United Nations is a worrying sign for the United States.

In an article in The National Interest written by international issues expert Ted Carpenter, “The United Nations General Assembly approved a resolution condemning the Russian invasion of Ukraine and calling for the immediate withdrawal of Russian military forces.

And the Biden administration was satisfied with the outcome. Ostensibly, US officials had reason to be satisfied that the vote was overwhelmingly in their favor 141 countries voted in favor of the resolution, while only five countries voted against it.

However, the vote reveals some interesting and troubling outcomes of Washington’s goal of forging an impregnable global coalition to inflict financial and political pain on the Russian government over its aggression against Ukraine, which is the large number of abstentions.

Thirty-five countries refused to placate the United States, opting instead to abstain.

Given the growing relations between Moscow and Beijing, it would be unrealistic for US leaders to expect China to support any realistic punitive measures against Russia.

The author concluded that Beijing is even capable of helping Moscow mitigate the impact of any sanctions imposed by the US-led coalition.

On the other hand, according to The National Interest, “some of the names included in the list of abstainers weren’t surprising.

Central Asian countries such as Kazakhstan, Tajikistan, Kyrgyzstan and Armenia.

Cuba (a longtime ally of Russia since the Soviet era), and the newer leftist regimes in Latin America in Nicaragua, Bolivia and El Salvador are seeking financial and political support from Russia.

Turkmenistan, Uzbekistan and Venezuela also chose not to vote…not to vote at all, which is effectively equivalent to abstaining from voting”.

The other countries on the list, however, were more surprising, as there were many countries from the greater Middle East, most notably Algeria, and the biggest shocker of all, Iraq, given Baghdad’s extensive military and economic dependence on the United States, it would have been thought one that Iraq’s vote would have appeared strongly in the field of positives.

Another big surprise was the large mass of African members who abstained from voting.

The most disturbing thing also for the United States, was when the major countries in South Asia and East Asia, especially India and China, refused to vote in favor of the resolution.

The extent of Washington’s frustration became clear when Biden personally criticized both countries for their decision.

India not only maintained its neutrality, but also brought Sri Lanka and Bangladesh with it.

Moreover, Pakistan joined the ranks of the countries that abstained from voting.

Vietnam and Mongolia refused to support the resolution.

Washington found Vietnam’s vote particularly disappointing, as Washington had been actively courting Hanoi as an economic and security partner for years.