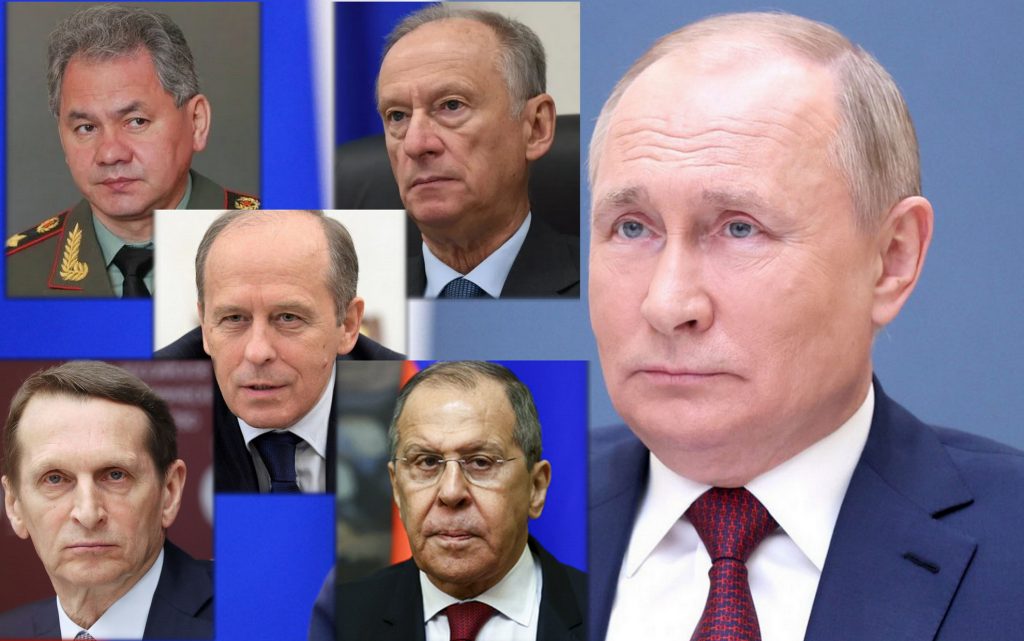 After the Russian invasion of Ukraine, the BBC said that Putin relies on making these decisions on the advice of leaders close to him.

BBC explained that although the Russian constitution stipulates those decisions about wars and others must be taken during the meetings of the Russian National Security Council, which includes 30 members, 5 personalities among them are closely related to Putin.

The BBC noted that three of the five people served with Putin in St. Petersburg during the seventies of the last century.

The Secretary-General of Russia’s National Security Council, which Putin chairs, is the most important figure in Putin’s team.

Patrushev worked with Putin in the KGB during the 1970s.

In 1999, Patrushev replaced Putin as head of Russia’s Federal Security Service (FSB) – the successor body of the KGB – and remained in office until 2008.

According to BBC, it has been said that, Patrushev is one of the closest men that Putin’s listening to.

The BBC says that Shoigu is Putin’s best friend and, in addition to being defense minister, is in charge of the military intelligence agency.

Shoigu and his team are accused of poisoning ex-Russian agent Sergei Skripal in Britain in 2018 and Russian opposition politician Alexei Navalny in Siberia in 2020.

The relationship between Putin and Shoigu grew in the nineties of the last century, and they accompany each other on recreational trips to Siberia and elsewhere.

The head of the Russian Federal Security Service, the FSB, served with Putin in the KGB office in Leningrad.

He took over the presidency of the Russian Federal Security Service in 2008, succeeding Patrushev.

He is a counterintelligence agent with decades of experience.

According to the BBC, Putin tends to believe the intelligence reports he receives from the Russian Federal Security Service to a greater degree than those he receives from any other source.

The foreign minister since 2004, he is one of the most experienced Russian diplomats, and although he didn’t study or work with Putin in the security institutions, the Russian president is said to have great respect for Lavrov, according to the BBC.

The British network added that “Lavrov isn’t in Putin’s circle of friends, but he has earned the president’s respect thanks to his professionalism, hard work, and lack of mistakes during his long career”.

He served with Putin in Leningrad and, despite being head of intelligence, is a relatively public official, giving interviews to many media outlets.

The BBC says, “Those who know Naryshkin personally say that he is loyal to Putin and disciplined by nature, accustomed to obeying orders and obeying the line that is drawn to him”.

His security background, sharp intellect, and professional experience helped him enter Putin’s inner circle, and Vladimir Putin is said to rely on intelligence notes provided by Naryshkin Agency, according to the BBC.