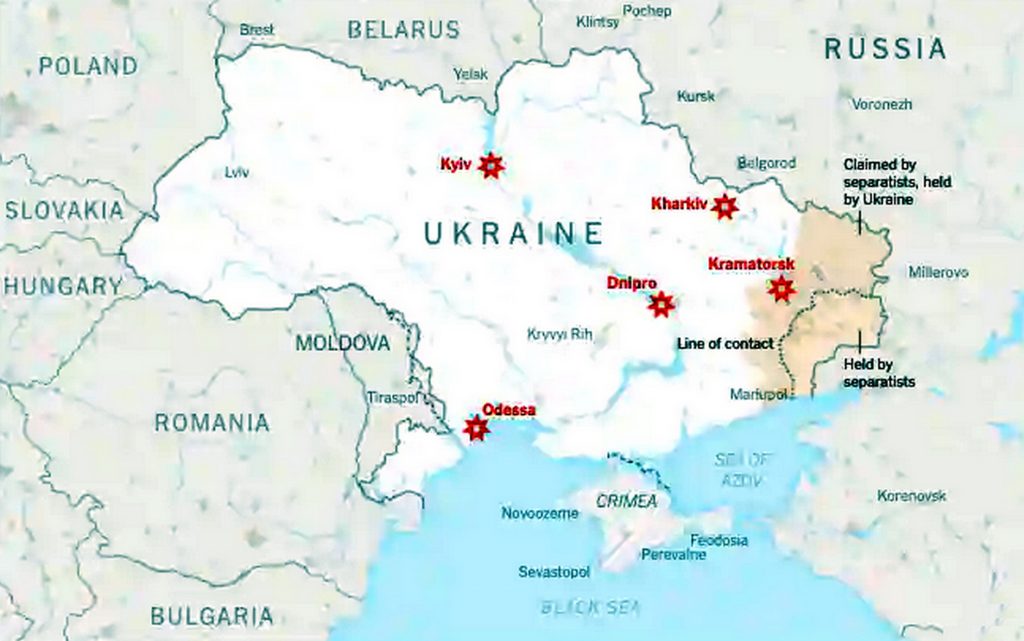 With the beginning of the Russian attack on Ukraine this Thursday morning, many Ukrainian cities were subjected to Russian bombardment.

Kyiv is the capital and largest city of Ukraine, located in the north-central part of the country on the Dnipro River, with a population of about 3 million.

The city is an important industrial, educational and cultural center in Eastern Europe.

It is home to high-tech industries and much higher education institutions, as well as the site of many famous archaeological sites.

The city has an extensive infrastructure and a well-developed public transport system, including the Kyiv metro.

Kyiv became in 1917 – after the independence of the Ukrainian People’s Republic from the Russian Empire – the capital of the new republic, and since 1921 Kyiv became an important city in the Ukrainian Soviet Socialist Republic and became its capital in 1934.

Kyiv remained the capital of Ukraine after the collapse of the Soviet Union and the independence of Ukraine in 1991.

It is the second-largest city in Ukraine after the capital, Kyiv, in terms of area and population.

It is the largest industrial, scientific and cultural center.

It is the largest student city, where there are more than 40 higher educational institutes.

The city is located in northeastern Ukraine at the confluence of the Luban and Kharkiv rivers.

It was founded in the 17th century (1656-1654 AD) and remained the capital of Ukraine until the early thirties of the 20th century.

Its population exceeds one million, and there are about 700 monuments, in addition to museums and theaters, and exhibition halls.

One of the major cities in the Republic of Ukraine, located on the coast of the Black Sea, the people of the city speak Ukrainian and Russian, and there are many universities with more than 20 different specializations.

It is ranked third after Kyiv and Kharkiv, and its population is more than one million, and there are 4 ports and an international airport.

It is considered the economic and tourist capital of the country, and its official language is Russian, despite the Ukrainian majority in it.

In the 19th century, Odessa was the fourth largest city in the Russian Empire after Moscow, Saint Petersburg, and Warsaw.

Odessa is a city known for its culture, with many museums and theaters, and famous for its prominent representatives.

The famous Ukrainian poet Oleksandr Pushkin, the Russian painter Vrubel, the Polish writer Adam Mitskevich and other men of literature and culture lived there and were influenced by it.

The city is located on the banks of the Kazyny Torst River in Donetsk, and in 2013 its population was 164,283 and is one of the most important centers of industrial and mechanical engineering in Ukraine.

The city grew from a small settlement of a small railway station road in 1868 and developed into a major city in northern Donetsk.

The city of Mariupol is located in the southeastern part of Ukraine in the Donetsk region, located on the port of the Sea of ​​Azov, and its population exceeds half a million.

It is the largest industrial center in the Donets Basin, the largest iron and steel producer in the country, and one of the most polluted cities in Ukraine due to the presence of a large number of factories in it.

With the escalation of the crisis between Russia and Ukraine, the name of the city of Lviv in western Ukraine on the border with Poland was frequently repeated, as the United States and other Western countries announced the transfer of their embassies from the capital, Kyiv, to the city of Lviv, following the “acceleration of the Russian military buildup” on the country’s borders.