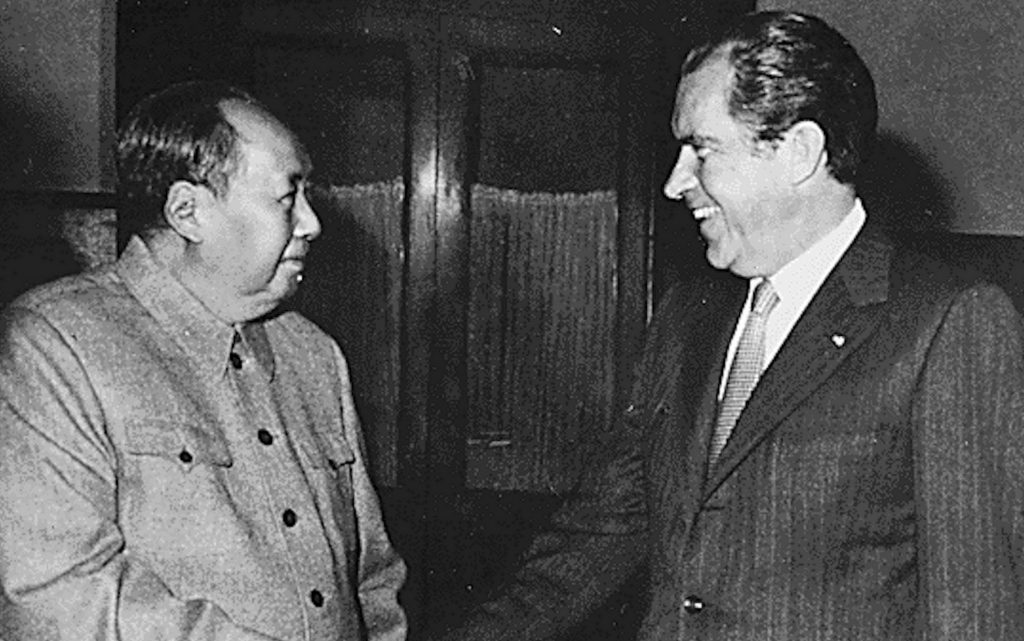 The New York Times highlighted the growing relations between China and Russia and its impact on the Western world and the leadership of the United States.

The newspaper published an article by journalist Farah Stockman, in which she said that Mao Zedong arrived in Moscow in 1949, expecting to be honored for transferring China, the world’s most populous country, to communism.

Instead, Joseph Stalin insulted him by making him wait to meet him.

Although Stalin and Mao eventually signed a treaty of friendship, Mao was disturbed by being treated like a worthless person from a backward country.

By the 1960s, Mao was openly contesting the Soviets for leadership of the communist world, even fighting between the Soviet Union and China in 1969, over disputed territories along their long border.

This led to an opportunity for Richard Nixon’s visit to China on February 21, 1972, a diplomatic initiative intended to distance China from the Soviet orbit.

In the short term, Nixon’s eight-day visit was an unmistakable success.

The stage was set for China’s eventual integration into the global economy.

But as we mark the 50th anniversary of that visit, some US officials and foreign policy analysts question the wisdom of partnering with Beijing.

Even Nixon, it seems, looked at the strategy with mixed feelings, and perhaps some regret.

Russia was a military threat, but never an economic competitor.

Nevertheless, China has become the number one power in a century capable of challenging American hegemony both economically and militarily.

Some US policymakers felt that China would eventually rise, with or without US help.

If you look at this view, welcoming China as a friendly partner, rather than a hostile power, makes sense.

Today, China holds a much larger stake in the international system and the US economy than Nixon ever imagined possible.

However, over the years, US policymakers have exaggerated the benefits of engaging China and underestimated the risks.

The steps China has taken toward a free-market economy have not transformed it into a democracy, as many have argued.

Although many American businessmen got rich from China’s success, and American consumers were able to buy a lot of cheap stuff, many American workers suffered when factories moved to China.

For the past twenty years, Washington has been too preoccupied with the war on terror to think about how to prevent itself from becoming too dependent on a communist state that might initially be at odds with us.

Chinese President Xi Jinping makes no secret of his view that the United States is a fading superpower and insists on preventing China’s rise to its rightful place in the world.

But Trump’s isolationism has benefited China, which has filled the void of America’s global decline.

And President Biden, who has rallied Europe, Australia, and Japan to talk about fighting authoritarianism and making democracy flourish around the world, presents a thorny problem for the Chinese leader.

If the United States and Europe remain united, they form an economic bloc that is still roughly twice the size of the Chinese economy.

But by framing the conflict as a battle between the “free world” and dictatorship, the Biden administration risks pushing Russia and China together in what some call the “new axis of authoritarianism”.

This time, Moscow is the younger brother who is seeking support from Beijing.

It could be among the most significant geopolitical developments in decades.

“What the West is doing now is the opposite of what Nixon did back then,” Adrian Giggs, co-author of Xi Jinping: The Most Powerful Man in the World, told me.

They’re partners because of a common enemy – the United States and Western Europe”.

It is too early to tell how much China will commit to Russia in its confrontation with the West over Ukraine.

China’s leaders have long argued for a world free of formal military alliances.

They’ve been wary of getting involved in other countries’ military conflicts.

But Russian President Vladimir Putin and President Xi struggled to present a common front recently when they issued an extraordinary joint statement hours before the opening of the Beijing Winter Olympics.

The statement pledged that their cooperation would be “better” than the two countries had during the Cold War.

No area of ​​cooperation will be outlawed, presumably including Russia giving China its most advanced weapons.

The two countries began getting closer in 2014 after Russia’s invasion of Crimea led to sanctions from the West.

Russia has escaped the fallout with some support from China, which has boosted trade and has bought Russian oil and gas.

This statement marks the first time that China has supported Russia’s demand to end NATO expansion.

By signing the text, Russia also backed China’s claim to Taiwan, and both sides said they were “deeply concerned” about the United States’ decision to form a military alliance with Britain and Australia and cooperate “in the field of nuclear-powered submarines”.

President Putin and President Xi may not be natural allies, but they have a lot in common.

Both see the United States as a chaotic hegemon.

Both men were so traumatized by the collapse of the Soviet Union that they took it as a cautionary tale of what not to do.

They both emphasized dissent strongly and dispensed with or circumvented presidential term limits, paving the way for the possibility of lifelong rule.

The most striking thing in their statement was the sweeping statements.

It sounds like a political statement calling on the United States to recognize that it is no longer the world leader.

Two months into Biden’s presidency of the Democracy Summit, Putin and Xi attacked “attempts by certain countries to impose their own standards of democracy on other countries, to monopolize the right to assess the level of compliance with democracy”.

And draw dividing lines based on ideology”.

They emphasized that the world had changed.

Russia and China should be respected as “world powers” ​​who can dictate what happens in their own backyards.

The statement can be read as an attempt to alienate America’s allies or to make Americans lose the will to fight.

The truth is that the world has changed.

American democracy doesn’t look as shiny as it used to be.

Many people all over the world are tired of Westerners telling them what to do.

However, the world doesn’t aspire to be dominated by a country that is the most closely watched in the world.

It is no exaggeration to say that the fate of the world depends on our ability to get the right response to this “axis of tyranny”.

Americans must defend our values ​​and our allies without ending up in a disastrous war.

No matter how strained relations may be, we must remember that the biggest threats we face today – climate change, pandemic, and nuclear proliferation – threaten Russia and China as well.