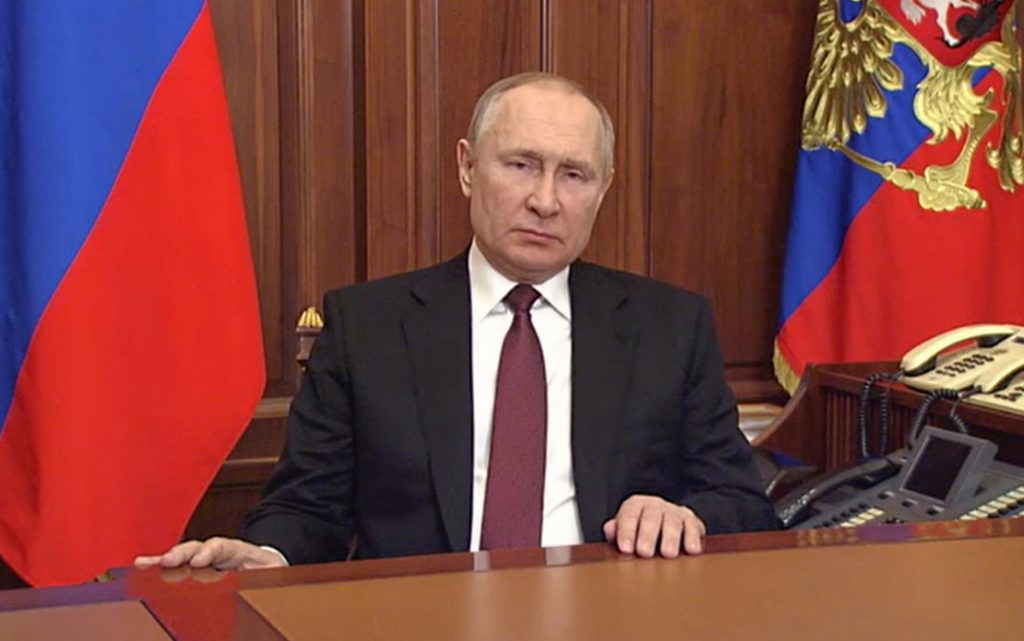 Russian President Vladimir Putin announced the launch of a military operation in the Donbas region in eastern Ukraine.

Putin said in a televised speech at dawn on Thursday that “the confrontation between Russia and the nationalist forces in Ukraine is inevitable”.

The Russian president added that: “The totality of events and analysis of information shows that the confrontation between Russia and the nationalist forces in Ukraine is inevitable… It is a matter of time”.

Putin added, “The leading countries of NATO support the neo-Nazis in Ukraine,” adding that “Russia has no opportunity other than to defend itself, and will use it”.

Putin stressed that Russia will not allow Ukraine to acquire nuclear weapons.

Russia considers it important that all peoples of Ukraine enjoy the right to self-determination. Russia’s actions are linked not to the infringement of Ukraine’s interests, but to protect itself from those who held Ukraine hostage”.

Putin urged Ukrainian soldiers to lay down their weapons immediately and go home.

“No one should have any doubts that a direct attack on Russia will have dire consequences for the potential aggressor,” he added.

In the event of external interference in the situation in Ukraine, Russia will respond immediately”.

He stressed, “Russia cannot feel safe and continue to exist and develop under the constant threat of Ukraine”.

“Moscow’s attempts to agree not to expand NATO have failed, and the situation around the alliance’s expansion has become more dangerous and we can no longer remain silent,” the Russian president said.

He added: “For the United States and its allies, this is a policy of containment for Russia, but for us, this is a real threat to the existence of the state”.

“One cannot look without pity at the genocide that is taking place in the Donbas,” he continued.

Earlier on Wednesday, Kremlin spokesman Dmitry Peskov said, in press statements in Moscow, that the administrations of the two separatist regions had requested support from President Putin via a telegram.

“The two administrations asked the Russian president to help repel the aggression of the Ukrainian armed forces,” Peskov said.

On Monday evening, Putin announced Russia’s official recognition of the independence of the Donetsk and Lugansk regions from Ukraine, which was under the control of pro-Moscow separatists, and that he ordered military forces to “maintain peace” in the region.

On Tuesday, the Russian parliament approved the decision to send troops outside the country.