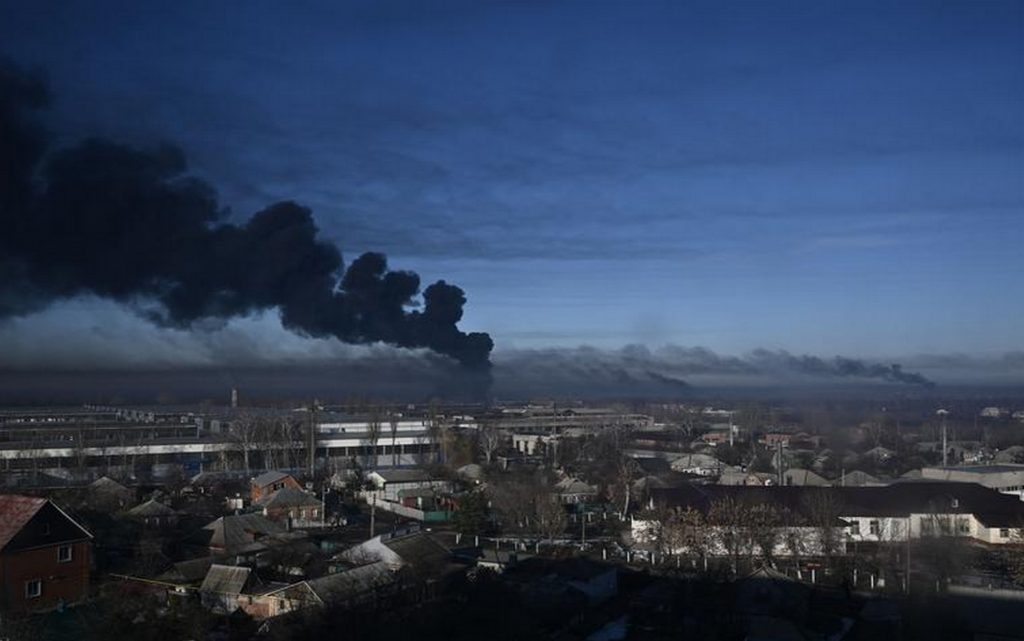 The Ukrainian Border Guard Service announced in a statement on Thursday that Russian forces entered the Kyiv region from Belarus to carry out an attack with Grad missiles on military targets.

An AFP journalist reported that unidentified helicopters were flying in groups at low altitudes in the suburb of Kyiv, the Ukrainian capital.

For his part, the Ukrainian Defense Minister said on Thursday, that Russian forces attacked an airport near the Ukrainian capital, Kyiv, and that at least three Russian helicopters were shot down.

Hostomel (Antonov) airport is located 30 km northwest of the center of the Ukrainian capital.

There was no independent confirmation of reports that Russian forces had taken control of the airport.

An adviser to Ukraine’s Interior Minister Anton Gerashchenko posted videos on the social networking site Facebook of what he says were the downing of Russian helicopters.

The first batch of US troops arrived to support the eastern flank of NATO in Latvia.

The Defense Ministry in Riga said about 40 US soldiers had arrived in Latvia on Thursday.

More than 300 US troops are scheduled to be deployed in Latvia, which borders Russia and its ally Belarus.

The troops will be stationed at the Adazi military base.

The US government announced the transfer of additional soldiers and equipment to Eastern Europe on Tuesday, in light of the escalation of the Ukraine crisis.

Heavy traffic blocked the main road out of Kyiv on Thursday as people tried to flee the capital after Russian forces invaded Ukraine, while others stood in long queues hoping to withdraw cash or stock up on basic goods.

Signs of tension are increasing as planes fly over the city and explosions are heard after sirens sound in the early hours of the morning.

Despite weeks of warnings from local and Western politicians of an imminent Russian attack, the Russian move surprised some in the city of about three million people.

“I didn’t expect that,” said Nikita, 34, a marketing worker as he waited in a long line at a supermarket, the cart next to him filled with water bottles.

Until this morning I thought nothing would happen”.

Others were determined to leave the city for the relative safety of western Ukraine after Russian President Vladimir Putin ordered a special military operation in the east of the country.

Some carried bags while searching for a way to leave the city, either by bus, car, or plane.

Eyewitnesses from Reuters said that traffic stopped on the main road leading to the western city of Lviv, far from areas that might be attacked.

Witnesses said that the queues for cars extended for tens of kilometers.