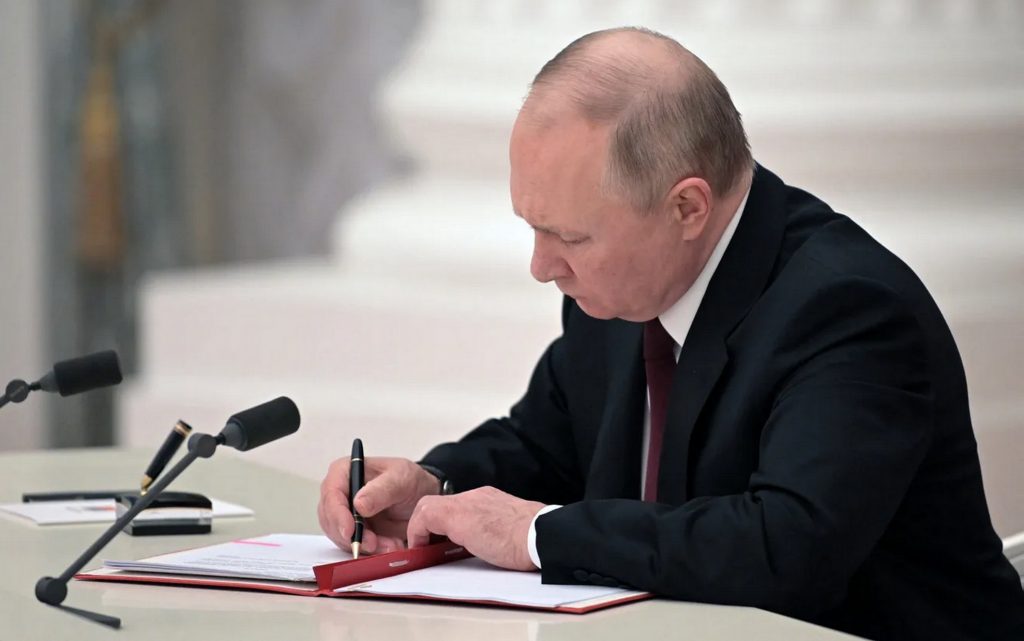 The Guardian newspaper published an article titled What it means for Russian President Vladimir Putin to recognize two separatist regions in eastern Ukraine as states and the possible repercussions of the Russian decision.

Initially, the Guardian identified the two breakaway regions as Donetsk and Lugansk, collectively referred to as the Donbas region.

Those two regions, which are controlled by Russian-backed separatists, fell out of government control in Ukraine and declared them two people’s republics in 2014.

Since then, the war between Ukrainian army forces and separatists in the east of the country has not stopped, a war that Ukraine says has killed about 15,000 people yet.

But what does Russia’s recognition of the independence of Ukraine’s separatist regions mean?

Quite simply, the official announcement of the Russian recognition of Donetsk and Lugansk means a further escalation of fears of all-out war in the region amid expectations that Russia is close to finalizing its plan to invade Ukraine with about 190 thousand of its forces.

Since this is the first time that Russia has recognized the independence of those regions, which justifies it to deploy military forces in them, which means that Russian forces will actually be inside Ukrainian territory, not on the border with Ukraine, which may precipitate direct military confrontations between the two sides, according to the newspaper article.

The article considers that Russia’s recognition of these Ukrainian separatist regions is one of the factors precipitating an outright war between Russia and Ukraine in the region, in violation of the Minsk agreements, which were signed in 2014-15 to stop the war between the two sides.

Although these agreements were not fully operational, they are still for all parties to the crisis, including Russia, the only chance to reach a peaceful solution to the conflict in Eastern Europe.

The article notes that the strongest reaction ever was from Western powers, especially the United States, which last week warned against recognizing the independence of the breakaway regions of Ukraine.

Western powers have threatened that they will impose harsh economic sanctions on Moscow if it recognizes these areas.

Antony Blinken, the US Secretary of State, said that this recognition would “further damage Ukraine’s sovereignty and territorial integrity, constitute a violation of international law, and put many question marks about Russia’s commitment to continue to take diplomacy as an essential approach to reaching a peaceful solution to the crisis,” stressing, However, this requires a quick and decisive response from the United States and its allies.

The article points out that this is not the first time that Russia has used the weapon of recognition of separatist regions with its neighbors from the former Soviet Union, as it had previously recognized the independence of Abkhazia and South Ossetia, two separatist regions in Georgia, after a war for a short time in 2008.

This recognition was aimed at eliminating Georgia’s ambitions to join NATO.

Russia provided these two regions with many forms of support, which included budget support, granting Russian citizenship to many of their residents, and deploying thousands of Russian forces on their lands.

The Russian recognition of the independence of Donetsk and Lugansk has advantaged that Russia can obtain, but the other side of the coin includes that there are also losses that may be incurred by the Russian Federation as a result of this recognition.

The article concludes that what Russia may gain from this procedure is that it may succeed in applying Georgia’s model with Ukraine and limit its ambitions to join NATO after it proves that the government in Kiev cannot control the entire territory of the country.

As for the losses, they are represented in more economic sanctions for Russia’s violation of the Minsk agreements, which it has long pledged to adhere to.