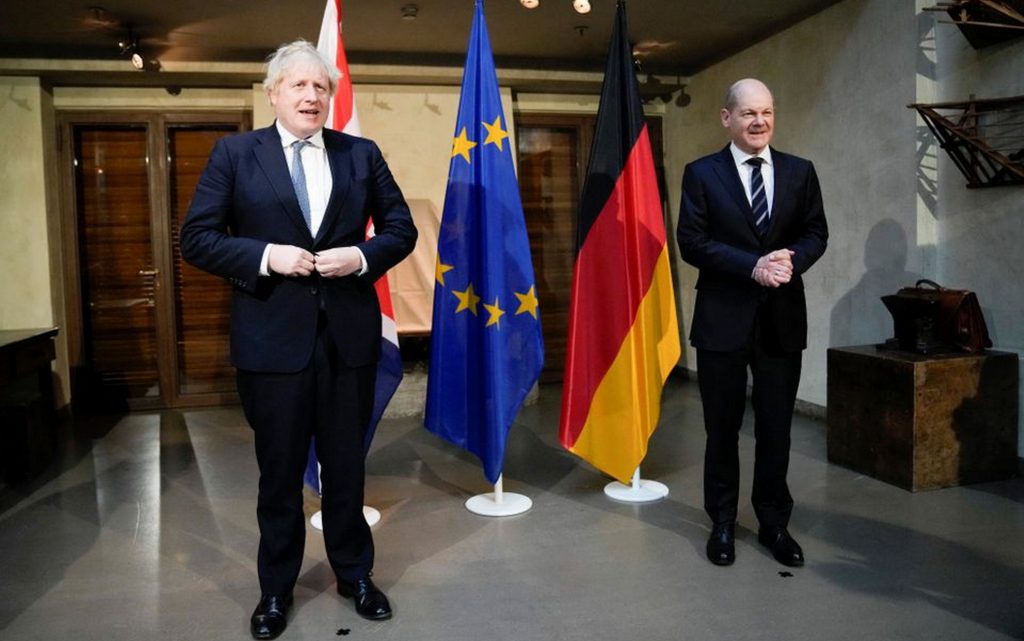 In response to the Russian military moves in the Donbas region in eastern Ukraine, the German government on Tuesday froze the joint Nord Stream 2 project between Germany and Russia to supply Russian gas to Europe.

German Chancellor Olaf Scholz announced in a press conference on Tuesday with Irish Prime Minister Michael Martin that he had asked the German body responsible for the project to suspend its review process.

This issue, he said, “seems to be technical, but is a necessary administrative step that prevents any validation of the pipeline, without this authentication, Nord Stream 2 cannot be started”.

The German chancellor stressed that “there are other sanctions as well that we can adopt in the event that Russia takes additional measures… But for now, it is about taking a very concrete step”.

He added that he and “in the United Nations Security Council, we and other countries made it clear last night that Russia does not have any support in the world for its behavior,” adding that Russian President Vladimir Putin is now waiting for a provocation “to have a pretext for the occupation of all of Ukraine”.

According to information obtained by the German news agency (DPA), the European Commission is moving unexpectedly towards presenting a draft text that includes wide-ranging sanctions against Russia, which will be discussed on Tuesday at a meeting at the level of foreign ministers in the French capital, Paris.

According to diplomatic sources that weren’t disclosed by the agency, the draft submitted to member states on Tuesday provides for a ban on the trading of Russian government bonds in order to make it more difficult for the Russian state to refinance.

In addition, the draft provides for the inclusion of several hundred people and companies in the EU sanctions list.

Among those on the sanctions list are about 350 members of the Russian parliament who voted in favor of Russian recognition of the eastern Ukrainian republics of Lugansk and Donetsk, as well as banks doing business in eastern Ukraine, nor will the EU’s free trade regulations with Ukraine apply to regions located in the east of the country.

It is planned to freeze the assets of any person, organization, or company on the EU sanctions list. In addition, the persons on the list will not be allowed to enter the European Union, and any business with them will be prohibited.

The sources participating in the consultations confirmed that the full arsenal of sanctions options hasn’t yet been used.

For example, sanctions were prepared against Russia’s energy sector and a ban on the export of high-tech in the event that Russia launched an attack on all of Ukraine.

It remains unlikely that President Vladimir Putin will be included in the European sanctions list.

The EU Council of Ministers will eventually have to decide to ratify all sanctions.

For his part, British Prime Minister Boris Johnson announced on Tuesday that his country would impose sanctions on five Russian banks and three wealthy individuals in response to Moscow’s recognition of the two breakaway regions in eastern Ukraine.

Johnson told parliament that London would use new powers approved by the council to impose pre-made sanctions on “Russian individuals and entities of strategic importance to the Kremlin”.

The sanctions will target Rossiya, IS bank, General Bank, Promsvyazbank, and the Black Sea Bank.

Johnson said any assets owned by businessmen Gennady Tymoshenko, Boris Rotenberg, and Igor Rotenberg would be frozen, and they would be denied entry to Britain.

“This is the first batch and the first torrent of what we are willing to do, and we will keep additional sanctions ready to use, along with the United States and the European Union,” he said.