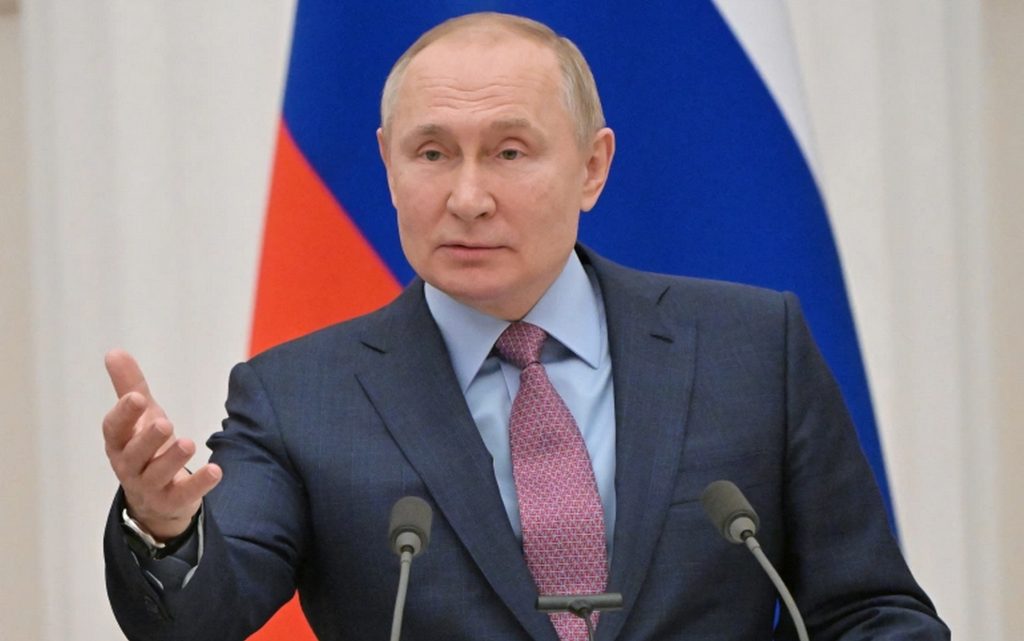 The Russian President Vladimir Putin announced the recognition of the immediate independence of Luhansk and Donetsk and stressed that the possibility of a sudden attack on Russia is expanding.

The signing ceremony of the two documents took place in the Kremlin, in the presence of the presidents of the Donetsk and Lugansk republics, Denis Pushilin and Denis Pasechnik.

Putin also signed with Pushilin and Pasechnik two separate agreements on friendship, cooperation, and assistance between Russia on the one hand and the republics of Donetsk and Lugansk on the other.

In a speech to the Russian people on Monday evening on the issue of recognizing the independence of the Donetsk and Lugansk republics before signing these documents, Putin said that the 4 million residents of the Donbas region “are subjected to genocide, and only because of their rejection of the Western-backed coup against power in Ukraine in 2014”.

They resisted aggressive national racism and neo-Naziism from the time of the caves that were raised to the level of a governmental movement, and are fighting for their basic rights to live in their land, speak their mother tongue, and preserve their culture and traditions”.

He continued: “Russia did everything possible to preserve the territorial integrity of Ukraine and over all these years has struggled tirelessly and patiently to achieve the implementation of Resolution 2202 of the United Nations Security Council, which established the Minsk package of measures for the settlement of the situation in the Donbas… Everything was in vain, presidents and deputies of the Rada changed.

But the essence and the aggressive and nationalist nature of the regime that seized power in Kyiv and which is entirely a creation of the coup against power in 2014, does not change, and those who took the path of violence, bloodshed, and illegitimacy did not recognize and do not recognize any solution to the Donbas issue except the military.

Putin asked the Federation Council to support this decision and ratify the friendship agreements with the two republics.

Since 2014, Ukraine has been witnessing a severe political-military crisis that erupted after a forcible change of authority in Kyiv following widespread demonstrations with the support of the West and the intense participation of the extremist nationalist forces in the country.

War erupted in the Donbas region of eastern Ukraine, inhabited by a majority Russian-speaking population, between local forces and the government, while the local population announced in April 2014 the creation of the Donetsk and Lugansk People’s Republics, which currently do not enjoy any international recognition.

On Friday, Pushilin and Pasichnik announced the start of evacuating residents of the two republics to the territory of Russia in order to avoid civilian casualties against the background of the escalation of hostilities with the Ukrainian government forces, which intensified the bombing of the two regions.

Ukrainian President Volodymyr Zelensky said on Monday he had spoken to US President Joe Biden as Russia recognized the independence of two regions controlled by Moscow-backed separatists.

Zelensky wrote on Twitter that he intended to speak to British Prime Minister Boris Johnson and that he had started a meeting of the National Security and Defense Council.