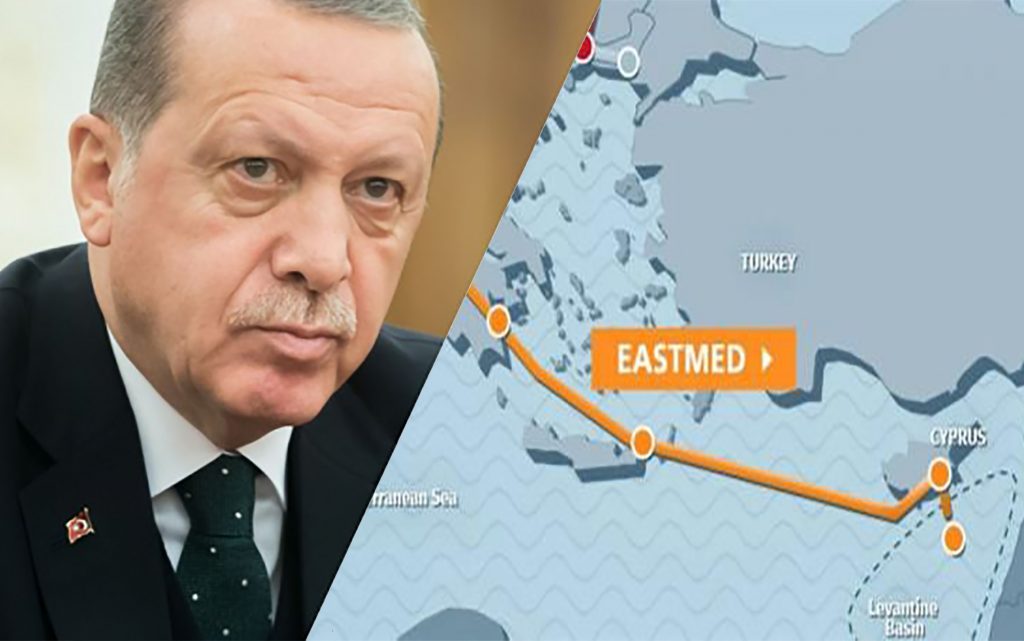 On the ninth of last January, in a sharp reversal of the previous US policy, the administration of President Joe Biden announced that it would no longer support the “EastMed” pipeline that connects natural gas fields in the eastern Mediterranean and Europe.

American researcher and analyst Soren Kern says in a report published by the American Gatestone Institute, that the Biden administration suddenly withdrew American support for the Eastern Mediterranean pipeline, which aims to transport natural gas from Israel to European markets.

The White House said the project conflicts with its “climate goals”.

Kern adds that the White House, in reaching its decision that effectively eliminates EastMed, has succumbed to pressure from Turkish President Recep Tayyip Erdogan, who is staunchly opposed to the underwater pipeline, because he will avoid Turkey.

He explained that Biden’s decision, which is said to have been coordinated with Turkey, and without consulting with Israel, Greece or Cyprus, which are the main countries involved in the project, undermines three of the United States’ strongest allies in the Mediterranean region.

The White House could not have chosen a less opportune moment to announce its decision, and with tensions escalating between Russia and Ukraine, Europe – which depends on Russia for about a third of its natural gas supplies – is looking for alternative sources of gas to reduce its excessive dependence on Moscow.

The Biden administration’s decision is also hypocritical, as the White House says it wants the Mediterranean region to transition to “clean energy”, but recently announced its support for the Nord Stream 2 pipeline, which is set to double shipments of Russian natural gas to Germany.

Kern believes that the cancellation of the “EastMed” pipeline, which is described as a disastrous decision, a strategic mistake and appeasement for Erdogan, represents a major geopolitical victory for Turkey’s strongman.

Analysts fear that Erdogan will be encouraged to continue escalating tensions in the Aegean and eastern Mediterranean as he seeks to expand Turkish control over energy supply routes to Europe.

In January 2020, Israel, Greece and Cyprus – with the strong support of the administration of former US President Donald Trump – signed the intergovernmental agreement for the “EastMed” project, which aims to reach a final investment decision by 2022 and complete the pipeline by 2025.

The project could eventually provide up to 10% of Europe’s natural gas needs.

And if we do it right, we’ll attract investments and maximize these resources”.

In November 2021, the European Commission included the EastMed pipeline in its list of so-called joint interest projects, priority cross-border energy projects aimed at integrating the energy infrastructure of the European Union.

The Biden administration appears to have lost its nerve after the Turkish Navy recently harassed the survey ship “Nautical Geo”, which is operated by Italy, while it was charting a possible route for “EastMed” in Greek waters off the coast of Crete.

Turkey claimed that Nautical Geo was carrying out an “unlawful, aggressive and provocative” violation of the waters over which Turkey claims.

Ankara insists that Israeli gas can only be sold to Europe through Turkey.

In 2016, Turkish and Israeli officials tried to sign a gas delivery agreement, but Erdogan’s demand that Israel lift its blockade of the Gaza Strip made it impossible to reach an agreement.

In turn, Erdogan hailed Biden’s turn as a victory.

Erdogan said, “If Israeli gas is to reach Europe, it can only be done through Turkey… We can sit down and talk about the terms.”

Kern says the withdrawal of support for the EastMed pipeline project was largely influenced by Amos Hochstein, a US Democratic Party politician and an aide to Hillary Clinton, John Kerry and former US President Barack Obama.

Hochstein, who is close to US President Joe Biden, is currently the senior energy security adviser at the US State Department.

In January 2022, the official Turkish TV channel TRT broadcast a documentary film entitled “The Dream of Pipes” in which Hochstein repeatedly criticized “EastMed” for excluding Turkey.

He also deplored the Trump administration’s support for the project.

Biden’s turn angered leaders of many countries in Europe, eastern and western, who said it would effectively give Moscow a stifling grip on European gas supplies and open the continent to Russian blackmail.