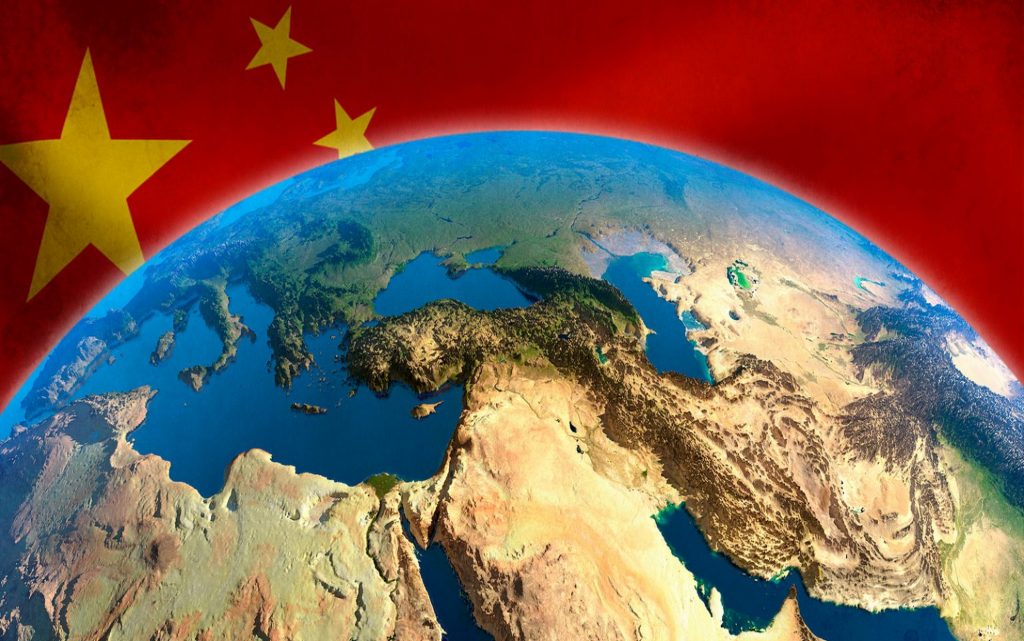 A report published by the Eurasia Review magazine talked about China’s modern strategy in the Middle East, which is based on strengthening partnerships with Iran and Syria.

The Eurasia Review report said, China’s strategy in the Middle East is making gradual progress after the comprehensive strategic cooperation agreement between Iran and China for the next 25 years entered into force, and Syria signed a memorandum of understanding to join the “Belt and Road” initiative.

Various huge trade and investment initiatives have helped China establish itself as a player in the region.

With the war in Syria coming to an end, both Iran and Syria want to boost their trade relations.

The proposal to “connect the five seas”, first put forward by Syrian President Bashar al Assad in 2009, is a reflection of the new Silk Road project that China is seeking to implement.

The report stated that Syria’s turn has come to join the Chinese Belt and Road Initiative, of which Iran is a part, however, this step is likely to have several repercussions.

For its part, the United States has been working since the era of Barack Obama to put an end to the agreements of Middle Eastern countries with China.

But these endeavors didn’t discourage China from continuing to work on integrating the Middle East into the Belt and Road Initiative, by strengthening communication and cooperation with Iran, all the way to Syria.

Sino-Syrian cooperation is not a source of concern for Russia and Iran.

Although Iran can compromise discussions over its nuclear program, it is now doing “whatever the field requires” and striking deals it will stick to for a quarter of a century with China.

This is in addition to the common interests of the three parties, Iran, Russia, and Syria.

Although China has remained calm throughout the Syrian conflict, its competition with the United States may intensify, especially since the Syrian moves coincide with “the moment when countermeasures should be implemented”.

The report pointed out that Russia’s return to the Middle East will be followed by the return of China soon.

After years of anticipation, Syria finally joined the Chinese Belt and Road Initiative, which was confirmed by Syrian President Bashar al Assad, when he spoke about his country’s participation in the initiative through infrastructure development projects.

The Syrian offer, which includes six projects, also won the approval of Beijing, which eventually chose to include Damascus in its initiative.

There are many projects that can be implemented as part of this initiative, such as railways between Tartus and the Iraqi border, highways linking the south and north of the country, power plants, oil and gas exploration, and Chinese free trade zones in Syria.

In a statement issued by the Xinhua News Agency, the Chinese ambassador to Syria, Qi Qianjin, said; His country desires to play a greater role in the economic, political, and military affairs of Syria, during his visit to a hospital in Damascus.

“I think it’s time to focus on the growth and reconstruction of Syria, and China will increase its support for the Syrian people and their government,” he added.

The best evidence of this is the humanitarian aid to Syria, which amounted to $44 million recently.

In an August 2019 letter, the Chinese ambassador emphasized the development of Syrian railways and ports, after China promised $20 billion to Syria, Yemen, Lebanon, and Jordan for rehabilitation and economic growth.

The Eurasia Review reported that Assad recently announced that he had reached a formal agreement with China to join the Belt and Road Initiative.

According to the agreement signed between China and Syria, railways, international roads, power stations, and the expansion of Syrian ports will be financed by China, with Syria committed to paying a large part of the expenses over time.

For his part, the Chinese president pledged a contribution of $20 billion, of which $9 billion is allocated to Syria.

However, China won’t compete with Russia for the port of Tartus, but it will strive to develop the port of Latakia with the help of the same company, which is currently working on expanding the port of Tripoli in Lebanon.

Although the contents of this strategic agreement, which is a plan for long-term cooperation between the two countries, weren’t disclosed, a consensus was reached.

This agreement will include economic cooperation as a major element, which will be in the form of separate agreements that must be signed and implemented between the two countries.

On March 27, 2021, the two countries announced a “comprehensive strategic partnership” in a joint statement, and on April 27, the foreign ministers of Iran and China, Javad Zarif and Wang Yi, signed the treaty.

The Eurasia Review magazine stated that the volume of trade exchanges between the two countries in recent years amounted to about $20 billion.

Since 1995, Iran has exported goods worth $9 billion to China and imported between $9 and $13 billion, and China is the main supplier of electrical, audio-visual, chemical, and industrial goods to Iran.

On the other hand, Iran is one of the largest oil suppliers to China, and before the sanctions, oil imports accounted for about 6 percent of the total imports.

Unofficial data also shows that during the sanctions period, China was the largest buyer of Iranian oil.

The main goal is to liberate China from the naval blockade and completely rely on the Strait of Malacca, where more than 150 ships sail daily most of them Chinese and Japanese tankers.

China is currently working to become the world’s leading economic power by exporting technology and engineering products and services to other countries.

Iran is a major supplier of energy and raw materials such as iron ore and crude petrochemical products to China, making it a major priority in the Belt and Road Initiative.

The Minister of Economy announced that the 25-year agreement between Iran and China is nearing completion.

Currently, the government owns about 100,000 unfinished economic and development projects and needs a credit amount of one thousand billion tomans to complete them.

Besides continuing to buy Iranian oil, the Chinese are helping to build large oil and gas reserves and modernize Iran’s oil refineries.

Other energy initiatives in the country include developing sustainable energy and renovating old energy facilities.

The Eurasia Review report added that the 25-year agreement includes building railways in different parts of the country, providing railways with electric power, such as the Tehran-Mashhad railway, developing metro networks in major Iranian cities, participating in the development of Makran beaches, and developing Iranian ports.

Such as Chabahar port, completing the domestic and international highways and highways in Iran.

In addition, other potential areas of cooperation for 25 years include telecommunications, science and technology, education, health, and tourism.