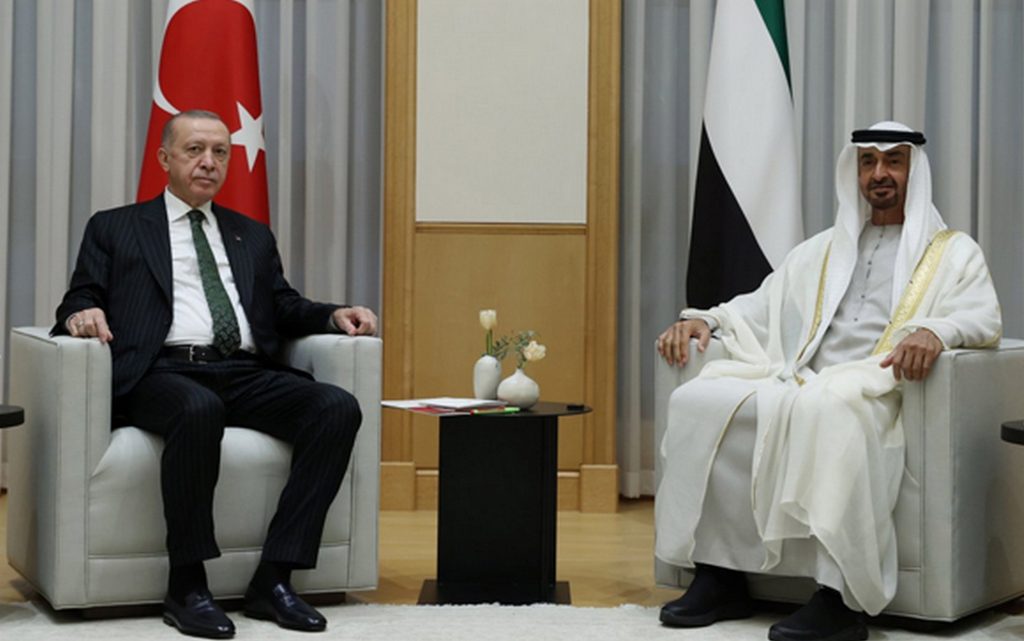 The UAE received Turkish President Recep Tayyip Erdogan on Monday, in the first visit of its kind since 2013, and at a time when the two countries are seeking economic cooperation through a set of agreements.

The Emirates News Agency stated that 13 agreements were signed in sectors including trade, industry, health, medical sciences, land and sea transport, and climate.

As for the Turkish Anadolu News Agency, it confirmed that the two countries had signed a defense agreement.

“During this visit, we aim to build on what we have gained (in relations) with the UAE and take the necessary steps to restore relations to the level they deserve,” Erdogan told reporters at Istanbul’s Ataturk Airport before his departure.

“Dialogue and cooperation between Turkey and the UAE are of great importance to the peace and stability of our entire region,” he added.

The Emirates News Agency stated that the two countries signed a joint statement “regarding the intention to start the comprehensive economic partnership agreement” between them.

UAE Minister of State for Foreign Trade, Thani al Zeyoudi, told Reuters that the UAE expects to significantly increase trade with Turkey once the Comprehensive Economic Partnership Agreement enters into force, adding that he hopes the two sides will finalize it within a period ranging between six months and a year.

Relations between the two countries were tense after the boycott imposed by Saudi Arabia and other countries, including the UAE, on Qatar, Ankara’s closest ally, and lasted from mid-2017 until early last year.

The UAE and Turkey also supported opposing sides in the war in Libya, and they differed over the issue of gas exploration in the Mediterranean.

But relations improved with the visit of Abu Dhabi Crown Prince Sheikh Mohammed bin Zayed al Nahyan to Turkey last November, the first by an Emirati official at this level since 2012 when billions of dollars of investment agreements were signed.

Erdogan wants to attract new investments to his country, which suffers from a record level of inflation, the highest since 2002.

It is likely that he will visit Saudi Arabia, the largest Arab economy, this month for the first time since the Khashoggi incident in October 2018.