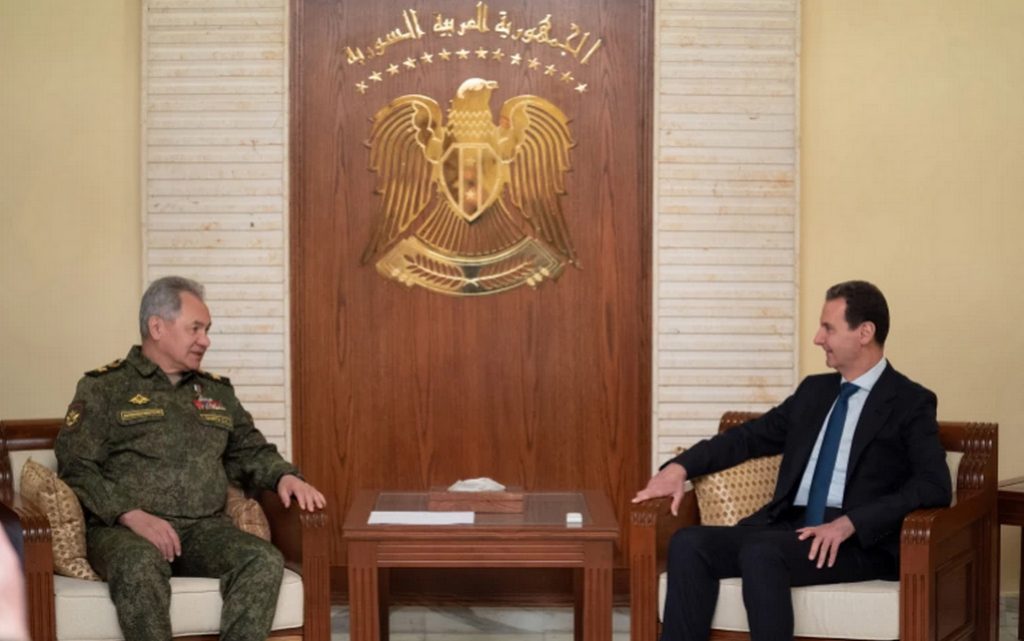 The Syrian President Bashar al Assad received in Damascus Russian Defense Minister Sergey Shoygu, who arrived in Syria to inspect the conduct of Russian naval maneuvers in the eastern Mediterranean.

The Russian Defense Ministry indicated that “Minister Shoygu briefed the Syrian President during the meeting on the conduct of Russian naval maneuvers in the eastern Mediterranean”.

The Russian Defense Ministry statement added, “Various issues of military-technical cooperation between the two countries were discussed in the framework of the joint fight against the remnants of international terrorists, and Russian humanitarian aid to the Syrian people, who are suffering from unjust sanctions imposed by the United States and Western countries”.

For its part, the Syrian presidency said in a statement that Russian Defense Minister Sergey Shoygu informed President Assad on the conduct of naval exercises conducted by the Russian military fleet from the port of Tartus.

The conversation also dealt with the “existing cooperation between the Russian and Syrian armies, especially in the issue of combating terrorism,” where “Minister Shoygu reiterated that his country will continue to cooperate with Syria in this field until the restoration of its sovereignty over its entire territory, despite the attempts of countries supporting terrorist organizations to revitalize them after the losses incurred by these organizations, and will continue to help the Syrian people to overcome the effects of the sanctions and the unjust siege imposed on them,” according to the statement of the Syrian presidency.

The Russian Defense Minister Sergey Shoygu had set tasks that would further improve the infrastructure of the naval base in Tartus, Syria.

“At the (logistical support) point of the Russian Navy in the city of Tartus, (Russian Defense Minister) Shoygu also inspected the ship repair complex of the Black Sea Fleet, where he set tasks to improve the infrastructure of the Russian ship base point in Syria”.

The Russian Defense Ministry announced that Shoygu had listened to the report of the Commander-in-Chief of the Navy on exercises to destroy groups of supposed enemy ships in Tartus, Syria.

And the Russian defense statement said: “At the direction of Russian President Vladimir Putin, Defense Minister General Sergei Shoigu paid a working visit to Damascus, where he was received by Syrian President Bashar al Assad”.