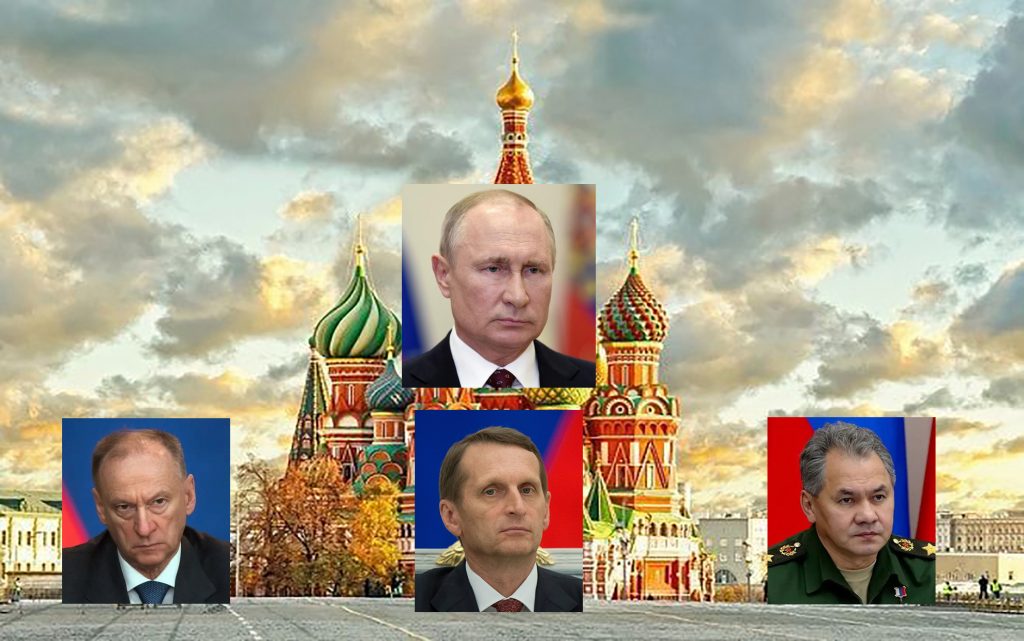 With the escalation of the current tension between Ukraine and Russia, several big names have emerged next to Russian President Vladimir Putin.

A large number of experts believe that they are behind Putin’s tough stance at the present time.

The team that helps Putin doesn’t appear much, but stands behind what the Russian president is doing, who always listens to their opinions, until recently it appeared that they are talking more about the Ukraine crisis than Putin himself.

Who are they and what do they say?

This question remained dominant among a large number of followers of the Russian issue, while some of them reached the identity of those hawks who share Putin’s decisions, including his Defense Minister Sergei Shoigu and Putin’s National Security Adviser Nikolai Patrushev, according to a report by The New York Times.

What are they saying?

“The West legalizes marriage between humans and animals”.

“Ukrainian leaders are as bad as Hitler”.

“The nationalists there are not human”.

These phrases represent the visions circulating among Russian President Vladimir Putin’s inner circle of senior Russian security officials who will likely sit at the table while their leader decides whether to wage open war against Ukraine if he so chooses.

In statements published by Russian media last year, these influential men – who were mostly born in the 1950s during the existence of the Soviet Union, such as Putin – have shown more powerful positions than their president did, which offers a hint of the hardline transformation that the Kremlin is taking with the escalation of Confront him against his perceived enemies inside and outside the country.

It traces the rise of security officials within the president’s circle, the evolution of Putin himself from a younger leader who showed a sympathetic face to the West at the turn of the century – while at the same time surrounding himself with advisers who included liberal figures in Russia – to the man who now tacitly threatens to launch a war major in Europe.

It also tells the story of the Kremlin’s years-long struggle to craft an ideology that underpins Putin’s rule: an ideology that increasingly relies on an image that portrays the West as an enemy, Ukraine as a threat, and makes Russia a bastion of “traditional values”.

Who are close to Putin?

Nobody really knows how the Russian president makes his decisions, or who he listens to most when he thinks about his next steps.

Vladimir Putin is keen to maintain his silence and has avoided publicly commenting on the crisis with Ukraine since December, despite appearing in front of the cameras almost daily, leaving it to the hawks around him to offer clues about what the Russian leader has in mind.

Some of these first met Putin while working with him in the KGB, and were accused by Western officials of overseeing the assassinations, influence operations, cyber espionage, and the bloody war that helped keep the Kremlin away from Europe and the United States.

Putin is known for his anti-Western expressions, but his chief national security adviser, Nikolai Patrushev, is known for an ardor that goes beyond even his boss.

Putin portrays his enemies as bent on falsifying the grandeur of Russia’s great past, but the director of Russia’s foreign intelligence service, Sergei Naryshkin, has made it a special priority to fight for that history.

Putin has adopted an increasingly state-involved approach to the economy, but his defense minister, Sergei Shoigu, has taken that direction to an extreme by leading a massive government effort to build new cities in Siberia.

“Sort of a time machine that takes us back to the worst years of Hitler’s occupation,” Naryshkin said of Ukraine this month, describing Ukraine’s pro-Western government as a “real dictatorship”.

He opened a show in Moscow entitled “Human Rights Violations in Ukraine”.

While Patrushev described “Rusophobia” or “phobia against Russia” in Ukraine as the fruit of a Western propaganda campaign dating back to the jealous European scribes who tarnished the reputation of the Russian Tsar Ivan the Terrible.

Now as Putin contemplates his bet on Ukraine and how high he can raise that bet; the question is whether he has embraced the conspiratorial mindset of the hawks in his administration.

Many signs indicate that radicals are gaining influence.

The most obvious change was seen inside Russia.

“In some places, they have even legalized animal marriage”, Patrushev said in an interview in September while describing Western values.

As Russian forces mass near Ukraine, another element of the ideology espoused by security officials looms large: the glorification of the Soviet past.

Patrushev said that the collapse of the Soviet Union “completely united the hands of the Western neoliberal elite,” allowing them to impose their unconventional values ​​on the world.

Yet the other Soviet Union belong to the sphere of legitimate Moscow influence.

Even Putin himself called the collapse of the Soviet Union a “geopolitical catastrophe”.

But he also used to seek advice from a number of officials, including people with liberal views.

Now, these kinds of officials are largely excluded from government, and technocrats like Mishustin, in contrast, almost never talk about issues beyond their immediate area of ​​responsibility.

This leaves room for elite security officials known as “siloviki” – political officials with military, security, and intelligence backgrounds – who worked in the KGB with President Putin.

Analysts say the escalation of tension with the West is a good thing for these officials, as it increases their influence among the ruling elite.

In an article published this month, Tatiana Stanovaya, founder of political analytics firm R. Politik, wrote: “The escalation of confrontations and sanctions do not frighten the siloviki, on the contrary, they open up more opportunities for them”.

Now Russian analysts are puzzled and do not know if Putin has had enough of the remaining pragmatic streak that would avoid an open war with Ukraine.