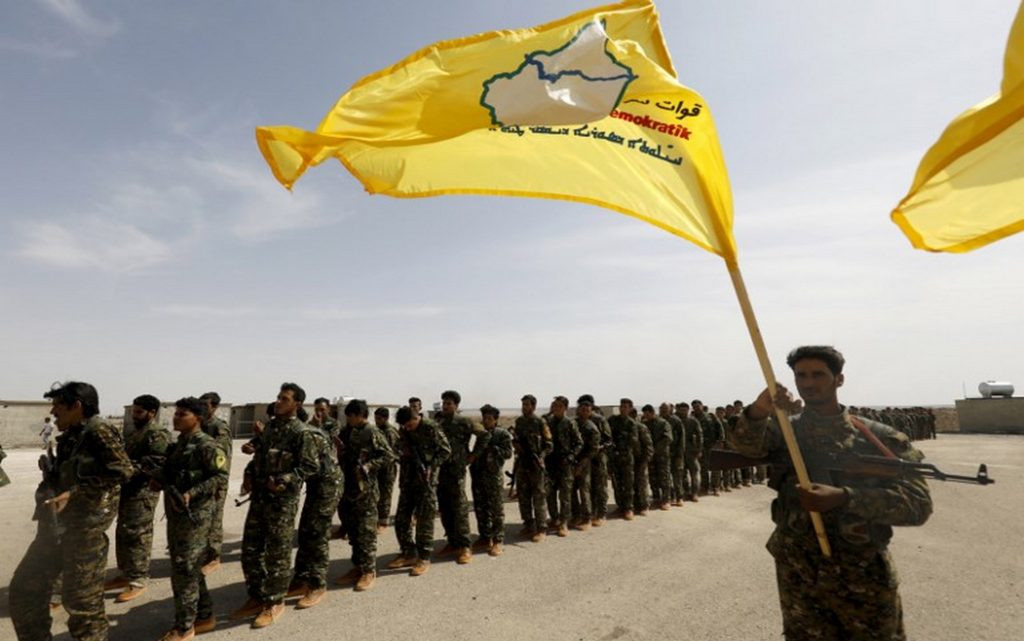 During the past few days, the operations of targeting the sites and checkpoints of the gunmen loyal to the US army escalated in eastern Syria.

The militants met with direct US support with extensive raid campaigns against the members of Arab tribes in a number of villages and towns.

Local sources in the countryside of Deir al Zour told the Russian Sputnik news agency that gunmen loyal to the US army in the SDF launched on Saturday, February 12, a massive raid and arrest campaign against the members of the Arab tribes (Bakara tribe) in the village (Zughayer Jazira) in the countryside of west Deir al Zour, after besieging the village and imposing a total curfew on it and the surrounding villages.

The sources added that the storming of the village (Zughayer Jazira) came in response to an attack on one of the SDF points, which led to the killing of a number of the organization’s militants, carried out by unknown gunmen believed to be members of the Arab tribes, who also targeted a checkpoint and a military headquarters of the organization with automatic weapons in the village (Hammar al Ali) in the western countryside of Deir al Zour.

Unidentified gunmen from members of the Arab tribes also carried out an attack with machine guns and RPG targeting the so-called “al Hankar” checkpoint of the SDF, between the towns of al Jardhi and Abu Hardoub in the eastern countryside of Deir al Zour, which led to the killing and wounding of a number of militants.

Some of them are in critical condition, and they were transferred to al Huda Hospital in the town of Abu Hamam in the same countryside, according to the sources.

The sources added that two militants of the SDF were wounded in an armed attack targeting a car they were traveling in the town of al Susah in the southeastern countryside of Deir al Zour.

Against the background of the attacks, the sources said that the SDF, with direct US support, carried out a campaign of arrests and raids on civilian homes in the town of Dhiban in the eastern countryside of Deir al Zour, which is considered the stronghold of (the Arab Akidat tribe), and arrested 7 people, while smashing cars owned by civilians in the town.

While dozens of Arab tribesmen cut off roads in the town of al Sabha and the city of al Busaira, east of Deir al Zour, on Saturday, with burning tires, in protest against the arbitrary arrests, killings, and insults that deprived the homes of Arab tribesmen in the region.

In Raqqa governorate, tribal sources reported that the SDF loyal to the US army, gave the residents of al Tarwazia village, north of Raqqa, on the international road (M4), members of the Arab tribes for a period of only two days to vacate their homes and leave the village, which witnessed large demonstrations and protests against the SDF’s policy and the US occupation.

This important development, which exposes hundreds of village residents to forced displacement, comes hours after the SDF launched a campaign of raids in the village of Tarwazia targeting a group of the village’s youth, according to the sources.

Meanwhile, operations targeting social figures and Arab tribal elders in the areas controlled by the SDF reappear, as Sheikh Thamer al Hamshar survived an assassination attempt in the countryside of Raqqa.

Local and clan sources revealed that two unidentified gunmen opened fire on Sheikh al Hamshar, the sheik of the Arab tribe, on Friday afternoon, at al Wasat Street, south of Tabqa city, and they fled.

The Hamshar was taken with one of his escorts to a hospital in the city of Raqqa for treatment, while their condition was described as critical by medical sources, according to sources.

It is noteworthy that the areas under the control of the US army and the SDF in eastern Syria are witnessing a state of popular anger and tribal rejection of their practices against the members of Arab tribes, which focus on the theft of oil, wheat, and underground wealth, launching indiscriminate arrest campaigns, losing security and safety, preventing education, closing schools and destroying universities and structures.