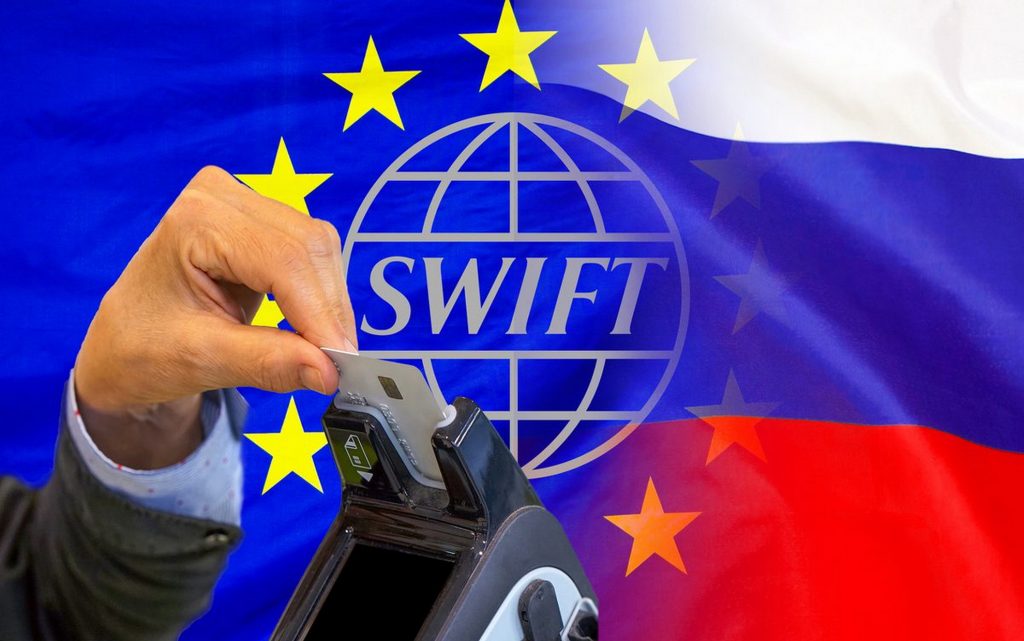 The international payments network SWIFT plays a vital role in the global financial system despite its limitations, which has made it an essential talk in the recurring Western threats to Russia that aim to undermine its security among other things.

The Belgian non-profit association that operates this network, provides secure messaging services for payments worth trillions of dollars between banks all over the world, which has always been on the table during international crises.

Western allies are now debating whether to pressure SWIFT, the Association for Global Interbank Financial Telecommunication, to cut off Russian banks’ access to their networks if a war breaks out between Russia and Ukraine.

However, it seems that the West will not be able to do this, and it may be the first to bear the consequences of this step, and many officials and experts argue that it will not be the most effective way to pressure Moscow, according to a report by the Financial Times.

What is the importance of the SWIFT system?

SWIFT operates a messaging system for banks around the world, transmits and maintains a record of payment requests on servers in Europe and the United States, and processes about 42 million such payment transactions daily for more than 2,000 banks and financial institutions.

US politicians called for Russia to be isolated from SWIFT after the reunification of Crimea in 2014, an idea that was never implemented.

Importantly, Russia, which accounted for 1.5% of all transactions on the SWIFT system in 2020, has itself developed an alternative messaging system called SBFS that handles about a fifth of domestic payments, but this is still less capable and more limited.

What is the probability of disconnecting Russia from the system?

SWIFT has been part of the discussion among Western allies about possible sanctions on Russia over what they claim are preparations to invade Ukraine, allegations that Moscow categorically denies at a time when the West is demanding security guarantees in light of NATO expansion, and military moves on its western borders.

The European Union, Britain, and the United States agreed to use financial sanctions against Russia, and European officials emphasized that everything is on the table, but excluding Moscow from SWIFT isn’t seen as the most likely punishment in the basic package.

SWIFT said it was neutral and that any decision to impose sanctions on individual countries or entities rests solely with the relevant government bodies and applicable lawmakers.

Gottfried Liebrandt, the association’s former chief executive, said last year that although the system was technically independent, more than 40% of its payment flows were in US dollars, and thus Washington had effective sanctioning authority over it.

A report by “Bloomberg” agency described the denial of the use of the SWIFT network as the nuclear option and the most divisive among Western officials, and quoted one of the sources, as saying that the matter comes up only occasionally in talks between the US administration and banks when lenders question whether such the action is possible.

“The implications for global trade and financial markets should be a major consideration for policymakers, as Russia is one of the largest oil and gas exporters, and relies on the SWIFT system to settle dollar-denominated transactions,” a Bloomberg Intelligence research report said.

One person familiar with the matter said the Biden administration is concerned about potential spillovers similar to what happened in 2018 when sanctions against Russia disrupted the global aluminum supply chain and sent prices for the metal up 30%.

How will Europe pay for Russian gas?

Paying without the SWIFT network would be much more difficult for Europe, and threatens to cut off the flow of gas on which Europe depends for 40% of supplies as well as rapidly disrupting the flow of oil.

This comes at a time when Europe is witnessing record gas prices and supply shortages, with oil prices rising above $90 a barrel for the first time since 2014.

A senior European banker said a potential alternative would be for Europe to pay for Russian gas by placing the euro in an escrow account in a European bank on behalf of Russian suppliers, accessible once sanctions are lifted, an unlikely approach given the amounts involved and the risks to suppliers.

Fear of disrupting gas exports, in particular, is likely to force the United States and the European Union to proceed with caution, said Daniel Tannebaum, a former official in the US Office of Foreign Assets Control, which oversees the sanctions.

Another Bloomberg report warned that separating Russia from the SWIFT system poses a great risk due to the potential disruptions it will cause in global energy markets and other Russian exports.

In an interview with the Russian Sputnik news agency last year, Natalia Savina, director of the Analytical Studies Sector for Macroeconomics and Financial Markets at the Russian Center for Strategic Studies, revealed the alternatives available to confront the scenario of Russia’s separation from SWIFT, despite its improbability.

“With the development of digital currencies for central banks in different countries, the need for SWIFT may be reduced significantly, and the digital currency infrastructure will allow central banks in different countries to have access to currencies around the clock, and at the cost of transfers, especially cross-border transfers, as much less”, Savina said.

For his part, Foreign Minister, Sergei Lavrov, confirmed that Russia has an alternative similar to the SWIFT system.

Meanwhile, the first deputy head of the Central Bank, Olga Skorobogatova, stressed that even in the event of something unexpected, it is possible to “go to work on the internal system safely”.

Despite the low probability of this step, Moscow has repeatedly confirmed its readiness, and Lavrov said at a press conference: “We don’t rule out anything.

Meanwhile, the Director of the Department of Economic Cooperation in the Russian Foreign Ministry, Dmitry Perechevsky, announced late last year that there are no real threats to separate Russia from the international SWIFT banking system and that Russia is working with its partners to reduce the dollar’s share in international transactions.