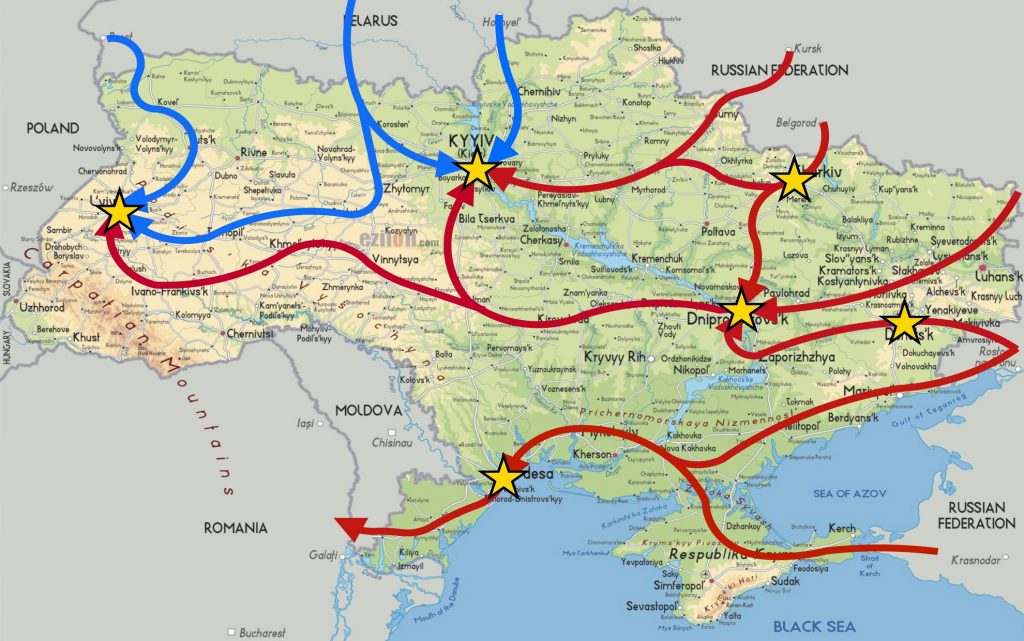 The Washington Post published an article in which it gathered speculation about the possibility of Russia “invading” Ukraine from the territory of Belarus through Chernobyl, and from the north and east towards the Dnieper River, as well as from the Black Sea.

The article states that Russia has allegedly amassed more than 100,000 troops along the border with Ukraine.

Washington and its allies are preparing for possible aggression by sending personnel and military equipment to NATO members near Ukraine, according to the Washington Post.

The post says about 100,000 square miles of wetlands, known as the Pinsk Marshes, stretch across northern Ukraine.

During the winter, these muddy plains freeze over, providing a stable ground for the passage of heavy military vehicles.

According to experts, in February, the frozen ground may provide the Russian forces with an opportunity to penetrate the territory of Ukraine through the swamps, which will be of strategic importance.

The first vice president of the Center for Strategic and International Studies (CSIS) believes that this route will allow vehicles to avoid congestion on the roads.

At the same time, he noted that in this very dirty region there is a risk of encountering problems from March to April.

The article says that swamps have historically been an obstacle to troops.

However, according to the Center for Naval Analysis of the Russian Studies Program, muddy landscapes this time around may not be the deciding factor.

These swamps were a potential danger to Western forces waging a hypothetical war in the Soviet Union, and were considered ‘impassable except in winter’.

Russian forces have long proven to be very adept at dealing with swampy terrain.

The article also notes that during World War II, the swamps became a challenge to German forces during Operation Barbarossa.

According to the author of the article, the swamps are located in a key strategic location; On the Belarusian border.

With the ground frozen, this could give Russian forces access to Kyiv, which is only 56 miles to the south, even though that direct route runs through the Chernobyl nuclear disaster site.

At the same time, the publication claims that Russian forces “looking for the shortest route to Kyiv” at Chernobyl may encounter another obstacle – the radioactivity preserved in the ground since the 1986 nuclear disaster.

In November, Ukraine sent border guards to patrol the area with rising tensions with Russia and Belarus.

While an invasion from southern Belarus would be the shortest route to the Ukrainian capital, many expect potential Russian military aggression to also come from the northeast and east, where “pro-Moscow separatists” control Ukrainian territory in the Donbass.

According to the author of the article, Russian forces can pass through Kharkov, Ukraine’s second most populous city, which “makes it a quick target”.

The author of the article also believes that “another access point for Russia” could be the Kerch Strait, which separates the Black Sea from the Sea of ​​Azov.

For his part, a Polish army spokesman told AFP Saturday that the transfer of US reinforcements to Poland, in the context of reassuring allies worried about Russian-Ukrainian tension has begun.

“The first soldiers have arrived at Jesionka airport” in the southeast of the country, said spokesman Major Brzenislav Lichinsky, adding that the bulk of the US battalion, consisting of 1,700 soldiers, will arrive soon.

On Saturday, a plane carrying soldiers from the US 82nd Airborne Division landed in Yesionka.

The United States announced Wednesday that it will send an additional 3,000 US troops to Eastern Europe to defend NATO countries from any aggression, amid diplomatic attempts to persuade Moscow to withdraw its forces massed on Ukraine’s borders.

The new US forces are added to the 8,500 soldiers that US President Joe Biden put on standby at the end of January to be deployed to the NATO Rapid Response Force if necessary.

Westerners have accused Moscow since the end of 2021 of amassing thousands of soldiers on the borders of Ukraine in preparation for a possible invasion, which Russia denies, stressing that it is only seeking to ensure its security.