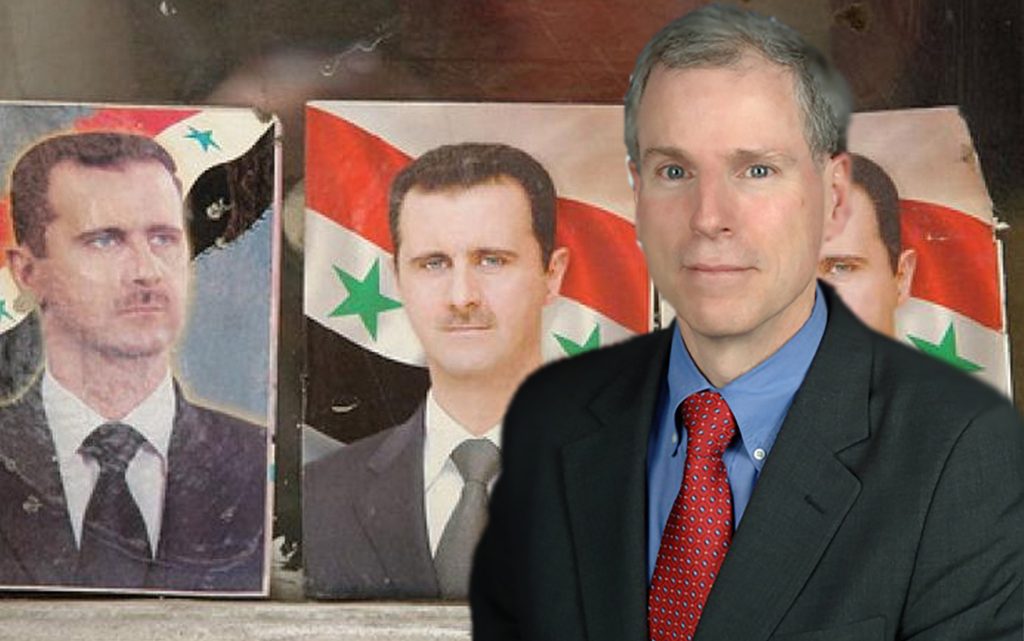 The former US ambassador in Syria, Robert Ford, wrote an article at the London based, Saudi al Sharq al Awsat newspaper, speaking on Syrian president and the situation regarding Syria.

In his article ford wrote, it is easy to welcome the decision of the court in the German “Koblenz”, which found Anwar Ruslan responsible for torture, rape and murder in “Branch 251” of the Syrian intelligence in Damascus.

When I was an ambassador in Damascus, I heard from the Syrians about the many detention centers, among them “Branch 251”.

We knew “theoretically” about the mistreatment of prisoners, but after seeing the Caesar photos, I began to realize the extent of the sheer brutality.

The Koblenz court convicted the aforementioned Syrian General Intelligence colonel of involvement in 27 cases of torture, rape and murder in “Branch 251”.

It is worth noting that a German expert on identifying evidence told the court that 110 victims of the 6,786 killed in the Caesar photographs appeared to be from Branch 251 based in part on the number written on their bodies.

In 2022, even government loyalists do not dispute the regime’s brutality.

Loyalists can only respond that the opposition and ISIS are mistreating the detainees either.

However, the scale of the killings and abuse in government centers far exceeds the violations committed by the opposition or ISIS.

One of the problems with the Syria debate is that the opposition is often just as bad, and equally responsible for the tragedy.

The Koblenz trial reminds us that the tragedy in Syria is, in fact, primarily the responsibility of the Syrian government.

The United Nations High Commissioner for Human Rights, Michelle Bachelet, praised the court’s decision, saying it was a major step towards truth, justice and reparation for violations in Syria.

One of the victims outside the courthouse told the British, The Independent newspaper on January 13 that the court’s decision tells every politician and security officer in Syria who commits abuses that “you cannot evade justice, and you will be held accountable one day.

There is no doubt that President Assad, Major General Hossam Luka, Director of General Intelligence (and thus Branch 251 among other centers) and other Syrian security officers, have clearly heard this message.

They also note two other sides of the issue; First, the German court held that even if Ruslan himself had not been torturing and raping, he hadn’t prevented other security officers from abusing prisoners, and thus he bears responsibility.

We also saw this principle in the Nuremberg trials of Nazi war criminals.

Assad and his circle bear responsibility under this principle.

Damascus also noted that Ruslan’s defection did not prevent him from being sentenced to life imprisonment.

The reaction inside Damascus will be very clear: To avoid accountability and imprisonment, Damascus will reject concessions or compromising, such as the sanctions demanded by the US “Caesar Act”, because leaders will one day fear more than justice.

We must be frank and tell the truth: it is easy to understand and support the insistence on achieving justice for the crimes committed in Syria, but this insistence makes a negotiated political solution to the war impossible.

Assad and those close to him won’t surrender and accept trials like “Koblenz”, in addition, they couldn’t hand over some of their lower-level officers to face trial, because they would risk rebellion within their security forces.

The government’s only option is to take full control of the remnants of Syria and evade justice.

The UN human rights team welcomed Koblenz’s decision, but perhaps the UN political team, led by Geir Pedersen, realizes that their work is now more difficult than ever.

In 1999, Algerian President Abdelaziz Bouteflika pardoned security forces, armed Islamist groups, and even terrorist groups that were responsible for atrocities during the civil war there.

He expanded the amnesty rule in 2005, and it is easy to criticize Bouteflika now.

He’s been in the chair for too long, Western human rights organizations also complain that the amnesty allowed those responsible for human rights violations in the Algeria war to evade justice, and they are right.

But we must also acknowledge that the amnesty has contributed to easing the fighting in Algeria after years of killing and extreme violence.

It should be noted that the Algerian army achieved a military victory in the war, but then demanded an amnesty to protect its officers legally.

Of course, it is impossible to imagine that the Syrian government and its security forces would ever trust the offer of immunity or respect the amnesty.

Assad and his aides will never trust their fate to the promises of others, not even from Russian President Putin or Supreme Leader Khamenei.

Finally, the Syrian government’s obstinacy and fear affords us the opportunity to escape the dire choice: between demanding justice for all or accepting a negotiated political settlement that must include amnesty.