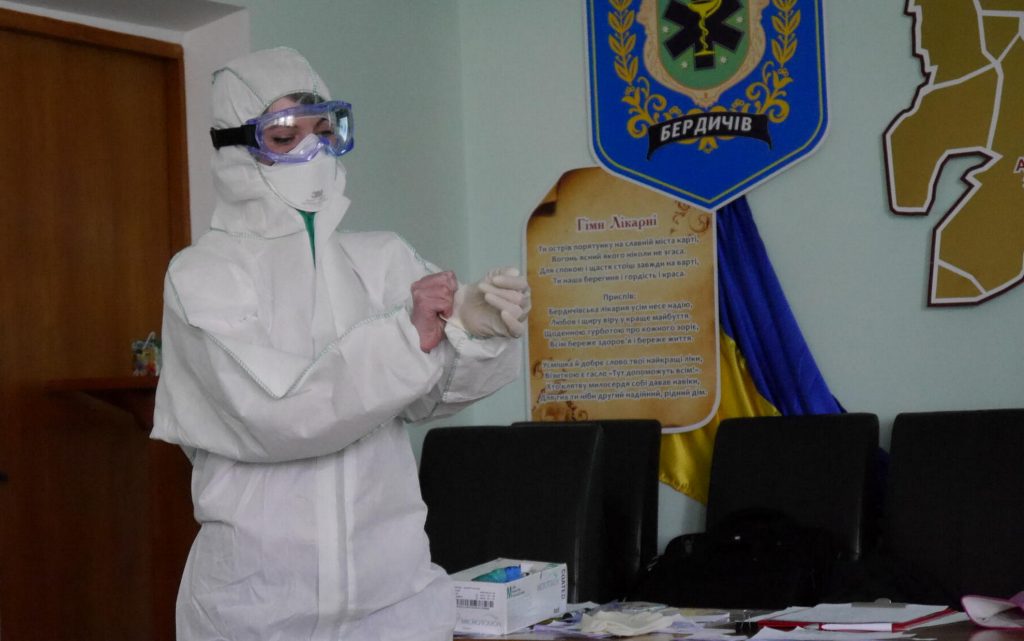 Numbers usually talk more than words, in the middle of the war against Covid with its variants, the whole world is on the same front despite the differences in politics, but what make things so nasty, is when the life and health of people can be determined by Politicians and state leaders.

Factors such as failure, mismanagement, and corruption, in addition to the inaction of countries that claim their friendship and concern for Ukraine, all of these factors condemned the Ukrainian people to this bitter reality.

When comes to the current Covid with population statistics all will begin.

According to current statistics on the status of the spread of Coronavirus in Ukraine, the following shows the official number:

The total population of Ukraine: 44.13 million

Nnumbers are changing daily of course, according to what the Ukrainian authorities provide them.

But, still, as the same as in every country, the real number is far more than the official.

As official figures show, the overall situation seems unsettling, but the actual problem is with the spread of the Omicron variant, for which there is a significant increase in cases around the world, particularly in a situation where the percentage of vaccine recipients is low, the Ukrainian government has relied on vaccines supplied from the West in general.

Ukraine announced that it had banned the registration of the Russian Sputnik V vaccine earlier this year.

In accordance with the decision of the Ukrainian Cabinet, the purchase and testing of Covid-19 vaccines will take place under the COVAX program (an initiative of the World Health Organization to ensure the equitable distribution and provision of Covid-19 vaccines to poor and middle-income countries that don’t have the capacity to sign bilateral agreements for the pre-purchase of the vaccine), and the resolution prohibits the registration of Covid-19 vaccine and any other medical drugs coming or manufactured in Russia.

According to data announced by the Ukrainian Ministry of Health, Ukraine received vaccines from various manufacturers, in three ways: direct purchase, free donations under the COVAX program, and humanitarian assistance.

And here, comes the recent data which revealed, despite all the numbers of the announced supplied, or those that were agreed upon, the country is currently suffering from scarcity and a shortage in the number of valid vaccines!

Reports from Ukraine indicates that there is a large number of vaccines that arrived in the country during the past six months have become invalid, or perhaps expired, and this is a result of either they were not preserved according to the required conditions, or that some are actually expired, which is the result of corruption within the authorities and entities responsible for purchasing and supply of these vaccines.

Currently, Ukraine has a vaccines shortage, and the situation is unknown.

According to the standard general immune system which was talked about by the World health organization (WHO), 75% of the population of any country must receive full doses of authorized Covid-19 vaccine to ensure that the epidemic is somehow curbed and under control with taking into account the conditions of prevention currently in place around the world from the conditions of general hygiene and sterilization, wearing masks and social distancing as much as possible.

These percentages are, of course, considered very low.

These Ukrainian figures clearly show the magnitude of the problem in the country, and according to the Public Health Centre of Ukraine, the number of Covid-19 tests made reaches around 20 million tests.

The Ukrainian government has requested assistance from the United States in terms of providing support and assistance to provide what the country needs to confront the pandemic, but the United States hasn’t provided any significant assistance, they only issue a warning for Americans not to travel to Ukraine due to Covid high Risk.

The poor performance in Ukraine, according to health and state experts is due to weak state institutions and major corruption, Ukrainians’ weak confidence in the vaccine, and therefore Ukrainians refused to receive the vaccine, which prompted the government to impose a series of measures, causing major protests.

In protest against the imposition of mandatory co-operative vaccination and new restrictions imposed by the Ukrainian Government on people who didn’t receive the vaccine, hundreds of people have closed a number of main streets in the Ukrainian capital Kyiv and have recently blocked traffic there.

The Ukrainian authorities had issued a decision limiting the use of public transport and public places to people vaccinated against the Coronavirus, in an attempt to speed up the recently slowing vaccination process across the country, which had recorded high new infection rates over the past two weeks.

What are Ukraine’s main problems that caused this situation?

Last year, in March, the National Democratic Institute found that 46% of Ukrainians would refuse to receive the vaccine if offered, at the same time, one-third of them may consider obtaining the vaccine if they are provided with more information and greater awareness about vaccines and their safety, underscoring the government’s failure to implement them.

in April 2021, the Kyiv International Institute of Sociology found that 52.2% of Ukrainians don’t want to receive the vaccine.

When asked why 40% said vaccines hadn’t been tested enough, 33% said they don’t trust vaccines available in Ukraine, while 20% believed the side effects of the vaccine could be worse than the virus itself.

Why Ukrainians refuse to receive the vaccine

Millions of people have received the Coronavirus vaccine safely, and vaccines have been carefully tested, the World Health Organization (WHO) has announced.

Nevertheless, there is a state of anxiety among people about vaccines on the streets of the capital Kyiv to the extent that they have reached the point of their opposition.

According to most local and Western polls and press reports conducted with people in Kyiv, people’s responses were mostly negative.

One of them, a 32-year-old man, says that “people die because of the vaccines that the government is trying to force the people to take, they are using methods similar to Hitler… I’m not going to get the vaccine”.

Another says: a 27-year-old lady, says that she’s against vaccines… “There is a lot of negative information about vaccines”.

She continued saying that she heard how the vaccine damages the reproductive system, and she thinks it’s going to be worse after the vaccine!

Why are Ukrainians questioning the vaccine?

The state of public distrust of the government and power in the country, and because most Ukrainians are convinced that they are in their own decision, that in the light of the weakness and corruption of power in their country, Ukrainians depend on themselves or their families instead of the state… This applies to the health sector as well.

There are also reasons related to the historical legacy, as low levels of confidence in government are historically due to past experiences such as the Chernobyl reactor disaster during the Soviet Union time, which have made people more suspicious of government.

Later on, the situation continued, as corrupt figures always are in power controlling everything in the country, despite the timid attempts announced by the current Ukrainian government, since electing the current President, who people praised because of his background being an outsider of the political scene (same as Donald Trump scenario in the US), and in fact, he has no experience, which created another problem of weakness in power and an inability to control matters for the Ukrainian government to be completely subdued behind a defined and pre-drawn political agenda made outside the borders of Ukraine.

Volodymyr Zelensky, the actor a comedian who become president, tried to fight corruption and promote democracy and transparency in the country in line with the standards of the European Union, which of course hasn’t happened yet, and it can’t be expected any time soon.

Unfortunately, the only thing that happened is that corruption had become part of the system structure.

The Ukrainian people, mostly critical since the late Soviet era, and as they did in the past, they simply ignore official reports.

After the collapse of the Soviet Union, people witnessed how few people got rich and how measures in their country went, such as privatization, enriched a limited group, so the Ukrainian people became divided and there was almost no consensus on the difficulty of trusting the country’s politicians.

The only reason that forced Ukrainians to receive the vaccine is, that it is required and a must in order for travel, especially to EU countries, because without receiving the vaccine they are simply unable to travel to the EU.

Therefore, the Ukrainians need to get Covid vaccines, not for their health, but to emigrate and leave their country to escape the corruption of their leaders, and their poor living conditions, which will not improve as long as the circumstances in the country continue to be managed in this way and the internal crises of the state are exported abroad and the people kept under external threat, which, if it occurs, is the result of mismanagement and corrupt rule.

The United States and the EU gave promise after promise to help and support Ukraine, however, these promises as it happened to many countries in the past can’t be kept, because, in the matters of interest of people and their lives, there will be no income and financial gain to US and EU.

So, why do they even bother to help Ukraine for free?

They already in the middle of the same problem as well.