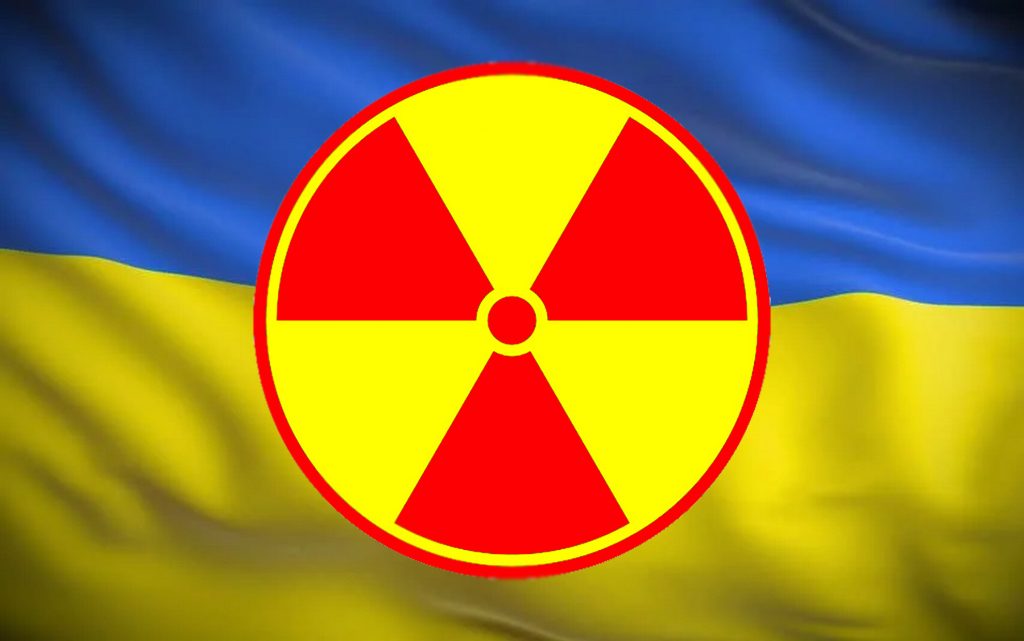 Last August, the Ukrainian president tweeted that he welcomed the signing of the Memorandum of Understanding between the national power generation company EnergoAtom and the US company of Westinghouse to build a reactor for the Khmelnytskyi Nuclear Power Plant as a model project, and four additional reactors in the future using similar technology.

The Ukrainian president stated that the total value of the project is 30 billion dollars.

It’s understood that Ukraine is seeking, through the construction of these nuclear reactors, to find alternatives for generating energy for various uses in the country, because it’s the relatively cheapest way in terms of cost to provide energy for the country and to get rid of dependence on any other resources, perhaps the most important of which, and the purpose of the Ukrainian and US goal of these projects, is to get rid of the need for the Natural gas from Russia.

In other words, everything that is taking place, no matter what it is, is actually part of the confrontation with Russia.

During the current year, the Ukrainian Energy Company announced the country’s current situation with regard to the country’s power plants, which still depend mostly on coal to generate electric power for the country.

The Ukrainian Energy Company stated that the country is suffering from an acute shortage of coal stocks at the national power plants.

Even coal needs, most of which were previously sourced from Russia and some Eastern European countries, and of course, which is an understandable measure, that reliance on coal in power generation has become a matter rejected according to global environmental conservation standards, which are conditions imposed by the European Union, and therefore Ukraine must follow.

What about the details of this Ukrainian-US agreement?

Recently that the West, led by the United States, is working to support Ukraine in confronting Russia, and these projects in the field of atomic energy are an understandable and detailed part of the stages of the Russian-Ukrainian confrontation as mentioned.

However, details expose issues, far beyond Russia, its directly connected to the domestic political issues, corruption, and of course an element in the compromising game that is still ongoing in the country.

What is the fact behind Westinghouse company projects in Ukraine, taking into account the collapsing model of the Ukrainian industry and the corresponding collapse of the energy complex?

Does Ukraine is looking for another Chernobyl?

Recently, scientists have warned of the consequences of nuclear reactions that were detected at the stricken Chernobyl nuclear power station in Ukraine, according to the American scientific magazine “Science” last May.

In an article published by Neil Hyatt, an atomic chemist at the University of Sheffield, UK, what is happening in the depths of the reactor chamber inside the plant is likened to “an old ember burning in a grill”.

According to the author of the article, Ukrainian researchers are currently striving to understand whether the resumed nuclear reactions will decay by themselves over time, or whether the situation calls for measures to prevent a new catastrophe.

Anatoly Doroshenko from the Institute for the Security of Atomic Power Stations in the Ukrainian capital, Kiev, says that detectors are detecting an increase in the number of neutrons coming out of an inaccessible place inside the station (which is in room 305/2), which indicates that a nuclear fission reaction is taking place there.

Ukrainian researcher Maxim Savelyev didn’t rule out the possibility of a new crisis at the Chernobyl plant, considering that the responsibility for managing the site has several years to remove the imminent threat.

It should be mentioned here, that during the Chernobyl disaster on April 26, 1986, the uranium fuel rods and their casings, the graphite cylinders, and the amounts of sand that were dumped on the active area of ​​the fourth reactor at the plant in an attempt to extinguish the fire, turned into melts that spread to the corners of the reactor chamber, which contains about 170 tons of radioactive uranium.

A year after the disaster, a steel and reinforced concrete “casket” dome was built over the stricken fourth reactor, but rainwater began to seep into the building, resulting in a rapid increase in the number of neutrons emanating from the fusion.

In 2016, a huge protective structure was built over the old “casket” called the “new safe barrier”, which ensured that the number of neutrons in most places under the cover was kept at its previous level and even decreased in some places, but there are other new places that neutrons started and for reasons It is still unknown where it appears and accumulates, as the molten nuclear fuel there causes the neutrons passing through it to participate in the fission of uranium nuclei more actively.

We are talking about reliable data here, and there is a real fear that fission reactions will lead to an uncontrolled emission of atomic energy.

According to the author of the article, solving the problem represents a great challenge, knowing that the high level of radiation in room 305/2 makes it impossible to install normal detectors in it, and there is a plan to design a robot capable of withstanding its exposure to radiation over a long period of time in order to drill holes in the unit Smelting and implanting boron cylinders to absorb neutrons.

So, how, and are the Ukrainian with this US cooperation aware of the challenges behind putting more nuclear facilities in the Country?

The US company of Westinghouse is already familiar to Ukraine, providing it on a par with the Russian Federation with nuclear fuel worth hundreds of millions of dollars.

Its AP1000 reactors are considered to be among the most modern and safe, although concerns have been expressed about the strength of the containment isolated loop.

The company recently went through bankruptcy proceedings, caused, among other things, by the fact that after the incident of Fukushima in Japan, its Japanese owners of Toshiba company began to experience problems.

Initially, they were planned to be launched in 2016-2017, but as a result of a number of postponements, the commissioning date shifted to 2021-2022, and the construction estimate doubled to $ 27 billion.

It should be noted that the project of the AP1000 reactor itself is innovative.

In addition to the fact that it allows you to obtain savings during operation, and this also means the factor of unknown in the process of operation.

So far, the world’s first AP1000 has been launched at Sanmen Station in China.

At another station, Haiyan, reactors of this type were created with the active participation of Chinese specialized companies in the technological process.

In fact, the AP1000 is the first US reactor, the design of which was developed after the accident at the Three Mile Island nuclear power plant in 1979.

For 30 years in the United States, the construction of nuclear power units was prohibited, as a result of which the capabilities of the US electrical industry and engineering companies in the field of nuclear energy were significantly reduced.

Westinghouse’s current developments are the result of synergies with Japanese investors.

There is active competition in the world for sales markets and for contracts in the nuclear energy segment: nuclear fuel, reactors, related equipment, design, engineering.

Ukraine has its own unique potential, both raw material (uranium ore deposits) and scientific, technical and production.

Westinghouse company is unlikely to buy uranium concentrate from Ukraine to produce its fuel.

Yes,The west is supporting Ukraine but at the same time, they won’t allow it to develop its own closed cycle for the production of nuclear fuel, although there are all the possibilities for this.

Voices in Ukraine, despite the danger alarm of Chernobyl are actively encourage to build country’s own nuclear waste storage facilities.

For long time Ukraine is depending on Russia, however the current circumstances and the clear Ukraine direction is going towards cutting all kind of dependency on Russia, either by self-dependence of course US and EU.

So, Westinghouse company, is supplying Ukraine with nuclear fuel.

Westinghouse Company, doesn’t need Ukraine’s uranium concentrate, and therefore, in order to reorient to US fuel, it needs to close its own mines in Ukraine.

The question of where to buy fuel will always be overgrown with speculation.

The construction of five nuclear power units in Ukraine is fraught with other risks.

At the moment, EnergoAtom performs the functions of a JI project, that is, it provides the population with affordable electricity.

But even with low prices for electrics, 40% of Ukrainians consume up to 250 kW per month, which speaks of colossal “energy poverty”.

In addition, EnergoAtom sells part of the electricity to our industrial enterprises and thereby minimizes the market tariff, which is “lifted up” by thermal generation and “green energy”.

It is clear that Ukraine doesn’t have $30 billion to pay for the construction of five blocks, and probably won’t be built.

In the best case, only the unit at the Khmelnytskyi Nuclear Power Plant, will be built, and even, the estimate cost during the construction process subjected to be increase significantly.

In the future, Ukraine has three units that were launched in the years of their independence (construction began in 1986), and several units that were put into operation in the 80s of the last century in the event of an extension of their service life.

The total capacity of nuclear power generation may be cut in half, and EnergoAtom will no longer be able to fulfill the function of JI, as well as provide the industry with affordable electricity as a factor of global competitiveness.

There are serious debts for the completion of one power unit will be borne by EnergoAtom, whose operational capabilities will be reduced by that time.

And this is a direct path to bankruptcy and its transfer into the hands of private corporations, which will be able to include the costs of capital investments and SNF utilization in the cost of electricity.

And then nuclear power in Ukraine from the category of the cheapest will become the most expensive.

In the end, on the same time of EnergoAtom signed the agreement with Westinghouse, last August.

The Ukrainian government prepared a bill on the corporatization of EnergoAtom, to audit its disposal of non-production assets according to the Ukrainian Minister of Energy Herman Halushchenko.