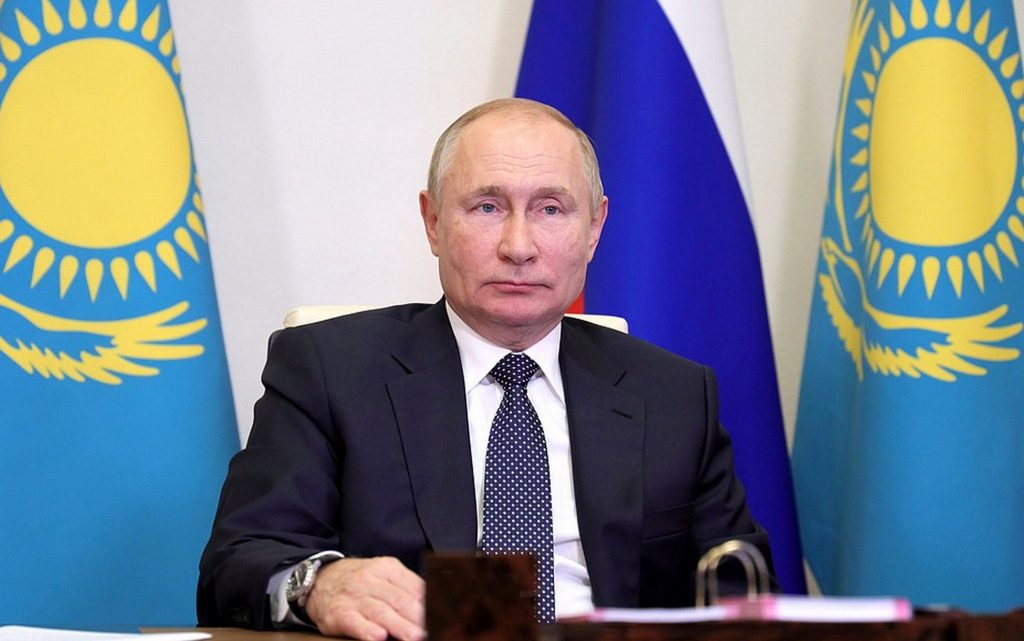 The failed rebellion, however, led to a change of power in Kazakhstan.

The first thing that catches one’s attention about the recent riots in Kazakhstan is that it occurred on the eve of the Russian-American talks, scheduled for January 10, on the Russian ultimatum, which Moscow issued in December last year.

Also, it is clear that no country is more interested in destabilizing Kazakhstan than the United States, and Turkey is the next potential beneficiary.

In general, Washington’s policy of dragging Russia into conflicts on its borders is old and well known.

The role of the United States in the Ukraine and Belarus coups is clear, and the role of Turkey, a member of NATO, in the Karabakh war is also clear.

Kazakhstani citizens of Russian origin make up about 3.5 million people, or more than 18% of the country’s population of 19.2 million.

The north of the country is de facto part of Russia’s southern Siberia, which Stalin granted to become part of the Kazakhstan border.

The ruling regime in Kazakhstan can be described as moderate nationalist.

Russians get some pressure and discrimination, but no more than that.

However, in the event of chaos, the Russian population of Kazakhstan will undoubtedly become the first victim of Kazakh militants, among whom are a number of ultra-nationalists.

In addition, the length of the Russian-Kazakh border exceeds 7,500 km, and in the event of chaos and humanitarian disaster in Kazakhstan, millions of refugees will flock to Russia, not to mention the possibility of creating another Islamic state in Kazakhstan as a result of the chaos.

And if chaos or civil war breaks out in Kazakhstan, Russia will have to send troops there and spend a significant part of its resources, which will weaken its ability to resist the USA in other directions.

In addition, the shortest land route from China to Europe passes through Kazakhstan, which is of strategic importance in the event of a naval blockade of China by the United States.

In other words, Washington can kill two birds with one stone: blocking this road, in addition to driving a wedge between Moscow and Beijing, as the introduction of Russian forces into Kazakhstan will change the balance of power between Russia and China in Central Asia, and make Beijing jealous.

As for Turkey, it has recently intensified its attempts to create a Turkic empire, and any destabilization in Kazakhstan gives it a special opportunity to start its own game through one of the local political forces.

Let us not forget that Kazakhstan is rich in energy resources that Turkey needs so much.

With all that said, no conclusive evidence of Washington’s or Turkey’s involvement in the recent events in Kazakhstan has been announced, despite Kazakh President Kassym-Jomart Tokayev’s announcement of external aggression.

However, the situation is more complex than that, and internal factors are no less important.

Historically, the Kazakh ethnicity is divided into three tribal groups, the so-called “nut” Zhuz the largest, middle and smallest.

Kazakh President Tokayev and his predecessor Nursultan Nazarbayev belong to the middle nut.

The protests began in western Kazakhstan, in the territory of the smaller Zhuz, and were then picked up by the south, which is under the control of the larger Zhuz.

On the one hand, so far, we cannot talk about an attempt at revolution, the events were only rioting precisely, the rioters didn’t have a political program, they didn’t have common leaders.

And a large part of these rioters were simply poor, uncivilized people of the rural social base, who were delighted with the opportunity to rob the “rich townspeople”.

But, on the other hand, it is quite clear, at both the popular and centrist levels, that there is an organization and coordination of the actions of individual groups of rioters.

I think this was done precisely at the level of tribes and clans.

That is, the tribal elite of the smaller and larger nuts is deprived of power and resources and, as we can see, it seeks to redistribute them.

As for the Russian minority, it is discriminated against and does not participate in any way in power, or in any attempts to redistribute it among the warring Kazakh clans.

By the way, in all the videos of the protests, I didn’t see a single Russian face.

There were economic preconditions for the recent events.

Kazakhstan is a resource-rich country, however, during the reforms of the 1990s, most of these resources were sold to American, Western and other foreign companies, which get most of the profits from their exploitation.

The worsening global economic crisis has affected the living standards of citizens, and the abolition of subsidies on LPG for cars was the last straw that broke the camel’s back.

In addition, one can speak of a split in the Kazakh ruling elite.

In many respects, the authorities themselves are to blame for the escalation of local protests to this scale, which wasn’t fully active at the time when the peaceful protests began, and later developed into large-scale robberies of shops and attacks on police stations and government facilities, which Part of it was looted and burned.

And even the rioters disarmed the soldiers, and beat them, when they didn’t have the orders to deal with them.

Forty-five rioters, with or without weapons, took control of the airport in the country’s largest city, the guards simply left.

In Almaty, of the 18 police officers who died, two of them were beheaded.

Although I believe that we should not look for traces of the “Islamic State” here, of course, the influence of Islamists in Kazakhstan cannot be denied.

Rather, this is due to the low level of the rebels’ culture and civilization.

It is possible that the explanation for the paralysis of law enforcement authorities is due to the nature of the dual power, and the formula of this power itself, in which the former president of the country, Nursultan Nazarbayev, left the official position of the presidency, but he nevertheless remained in power.

And his covert influence on law enforcement institutions was much greater than that of the official President Tokayev.

After the first days of confusion and inaction on the part of the law enforcement institutions, President Tokayev dismissed the former president and “the dean of the nation”, Nursultan Nazarbayev, who named the country’s capital, from his position as Secretary of the Security Council, which was supposed to be held by Nazarbayev for life.

And President Tokayev took this position himself.

In addition, Tokayev dismissed the government, and replaced his men with the post of head of the National Security Committee, to which he appointed Karim Masimov, and his first deputy, Samat Abish, the nephew of former President Nazarbayev.

After a cabinet reshuffle of the leaders of law enforcement institutions, and the announcement of a tough response to the rioters, President Tokayev began to brutally suppress the riots, and also turned to the CSTO for help.

The last step was rather a political one aimed at showing support for President Tokayev, as the local authorities actually succeeded in coping with the suppression of the riots on their own.

I would like to point out here that the West refrained from condemning the riots, but is likely to condemn the suppression of the riots.

One way or another, it was announced that a force of 3,000 military personnel from the CSTO countries, from Russia, Belarus, Tajikistan and Armenia, would be sent to participate in the protection of state institutions and military and strategic installations.

We can say that this round of crisis is over.

The United States didn’t succeed in obtaining a gift prior to its negotiations with Russia, and Russia avoided the emergence of another hot spot on its borders, and showed the West its readiness to deal with it.

However, one long-term result remains.

The crises we observe in the so-called post-Soviet countries are only partly organized by Washington and Brussels.

That is, it can be concluded that the post-Soviet states, largely artificial, which appeared by chance on the world map, are experiencing a state crisis.

Exhausted from the Soviet economic legacy, and due to extreme nationalism, tribalism and often confrontation with Russia, these countries reached economic bankruptcy and ethnic strife, followed by social explosion and political turmoil.

The Kazakh clans have been doing this throughout history, fighting each other more fiercely than with any external enemy.

Without Russian rule, all post-Soviet states, with resources exhausted, revert back to their centuries-old history as a gauntlet of foreign policies.

Perhaps, in the context of the impending global economic crisis, most or all of the dissident republics from the Soviet Union will experience economic and social collapse, plunge into chaos, and lose the pattern of an independent state, without external influences.

But I am more inclined to believe that on the territory of the former Russian Empire, the Soviet Union, in a decade or two there will be but one great state or some kind of union, the core of which will, of course, be Russia.

History has a cyclical nature.