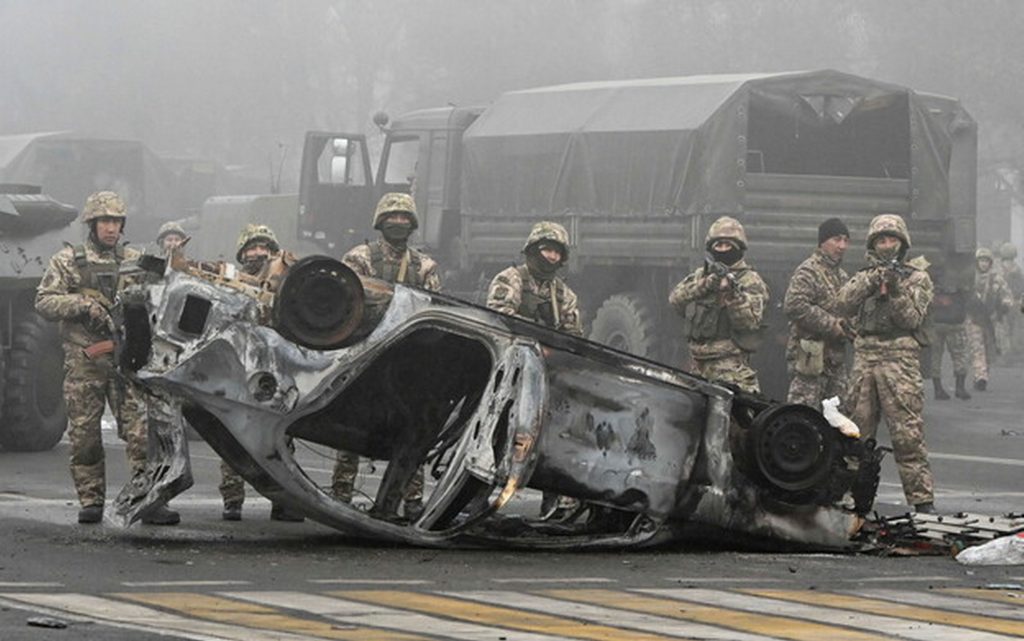 Russia was one of the first countries to comment on the escalating protests in Kazakhstan, its southern neighbor, at a time when President Vladimir Putin appears to be in a difficult position over those protests that could weaken him.

But as the protests escalated into chaos and riots in some areas, Russia and its allies announced last Thursday sending the first battalion of peacekeeping forces to Kazakhstan, which is witnessing chaotic riots.

“A collective peacekeeping force from the Collective Security Treaty Organization has been sent to Kazakhstan for a limited period in order to ensure the stabilization and normalization of the situation,” the military alliance said in a statement.

He explained that the forces include units of the armed forces of Russia, Belarus, Armenia, Tajikistan and Kyrgyzstan, the other five members of the Moscow-dominated Collective Security Treaty Organization with Kazakhstan.

He said that the forces’ main tasks “will be to protect important government and military installations and assist law enforcement forces.

In an analysis by CNN, the protests in Kazakhstan, which are slowly unfolding across its southern border, are alarming, as Russia maintains there the Baikonur Cosmodrome, through which Russian manned space missions are launched.

Kazakhstan is home to a Russian ethnic minority, representing 20 percent of the population.

At these times, the Kremlin is engaged in a high-stakes brinkmanship with Ukraine massing massive forces on its border, so protests in its southern neighbor are an unwelcome distraction.

The analysis expected that Moscow would use everything in its power to suppress the protests, including its links with Kazakh elites, as well as its strong relationship with regional and regional economic organizations.

The story of the protests in Kazakhstan began on January 2, one day after raising the prices of liquefied gas, which many residents depend on.

On the second day, demonstrations took place in the city of Zhanazin, before spreading to large areas of the country, including Almaty, the country’s economic capital.

President Kassem Tokayev’s measures to dismiss the government and declare a state of emergency have not succeeded in containing the protests, which have so far resulted in dozens of deaths and hundreds of injuries.