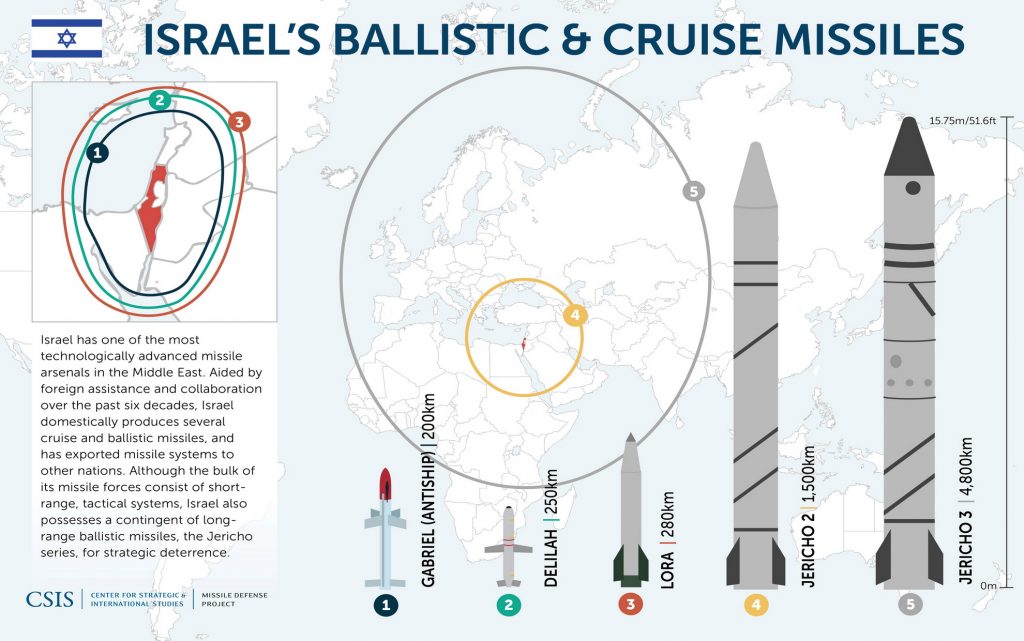 Missiles have become one of the most dangerous weapons of deterrence, with the armies of the world racing to possess a diverse arsenal of them because they can reach the depth of the enemy at a tremendous speed that makes the process of intercepting them one of the most difficult military operations.

At a time when Iran has the largest missile arsenal in the Middle East in terms of size and types, the US Missile Threat website says that the Israeli missile arsenal is one of the most advanced.

How did Israel start developing a missile arsenal?

The history of the Israeli missile arsenal dates back to about 6 decades, during which it was able to acquire various types of ballistic and winged missiles, and it began exporting some of them to several countries.

While the majority of Israeli missiles are classified under short-range and tactical missiles, they also possess long-range ballistic missiles such as the Jericho, to achieve the goal of strategic deterrence.

What are the types of Israeli missiles?

Israel possesses 9 types of missiles, some of which are local and others imported from other countries.

They include winged and ballistic missiles, in addition to rocket artillery:

Delilah: A winged ground-attack missile with a range of 250-300 km and can be launched from the air or from mobile launchers on the ground.

Extra: Rocket artillery with a range of 150 km.

Gabriel: A winged anti-ship missile with a range of 35-400 km and can be launched from naval units, land bases or aircraft.

Harpoon: a winged anti-ship missile with a range between 90 and 240 km, and it is an American manufacture.

Jericho-1: a short-range ballistic missile developed between France and Israel with a range of 500 to 720 km, but it has been decommissioned.

Jericho-2: a medium-range ballistic missile developed by Israel, with a range between 1,500 and 3,500 km.

Lora: A short-range ballistic missile with a range of 280 km that can be launched from land or sea, and it is a class of anti-ship missiles.

Popeye: A winged missile to hit ground targets with a range of between 75 and 90 km that can be launched from aircraft or submarines.