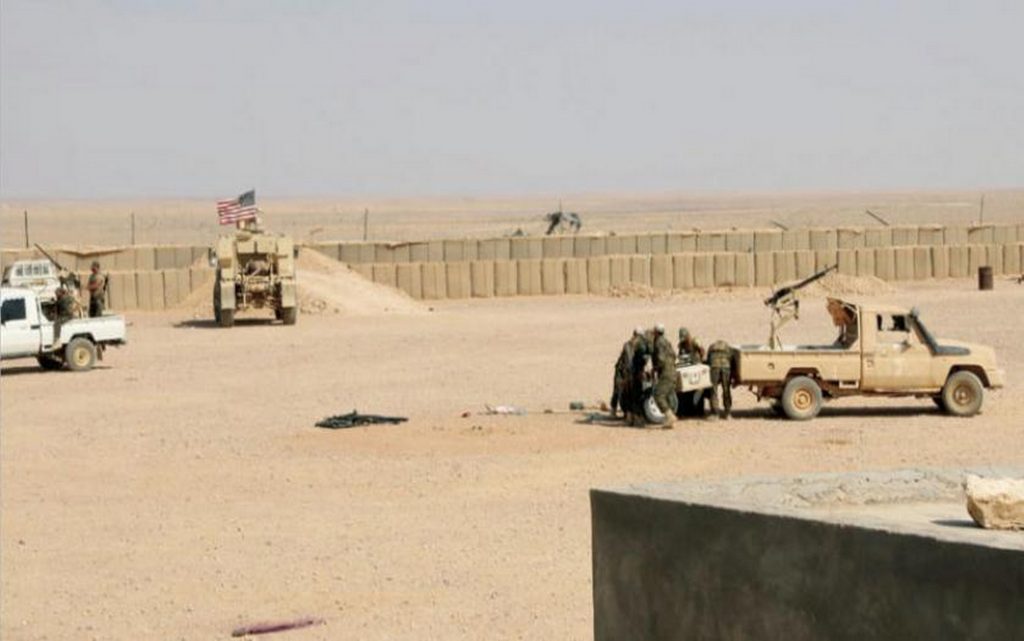 The remote US base remains a relatively low-cost and high-impact tool to prevent the re-emergence of the “Islamic State” and to undermine aggressive Iranian activity and influence over Syria’s long-term prospects.

On the eve of October 20, a group of armed drones and missiles targeted a small US military base in southern Syria.

The al Tanf Military Garrison was established in 2016 at the intersection of the country’s borders with Jordan and Iraq, and includes more than a hundred US service members.

The base is used to continue operations against the “Islamic State” and impede the activities of Iran’s proxies in Syria, while at the same time it is considered an influence card in the long-running negotiations on the country’s future.

The state of the garrison is not permanent, however, and the latest attack underscores why the Biden administration will soon chart a course for the future of US domestic military presence.

Before 2016, the area around the garrison was under the control of the “Islamic State” before it was liberated by the coalition forces.

Since then, the United States has used it as a training base for Syrian opposition groups, with 100 to 200 US service members stationed there at any given time.

The base is located along one of the main highways between Baghdad and Damascus, isolating it from the US military in northeastern Syria.

The garrison is surrounded by a 55-kilometer conflict resolution zone that was formed within the framework of a US-Russian understanding in 2016.

This area enabled US forces and partner countries to undermine the operations of the “Islamic State” and prevented the entry of forces allied with Iran.

It has also had a secondary effect in attracting Syrian refugees to the Rukban camp, which is only a few miles from the base on the Syrian side of the border.

At its peak, al Rukban was a refuge for more than 50,000 Syrian refugees, although this number, according to reports, decreased to about 10,000 over the years, in light of the return of the population to areas under the control of the regime following the conclusion of several deals with Damascus.

The presence of a large number of refugees near a US expeditionary base exerted additional pressure on the service personnel stationed there, as appeared in 2020, when two pregnant refugees rushed to the garrison to perform an emergency caesarean section.

Also, al Rukban embraces the families of the main opposition faction in the “al Tanf military garrison,” namely, “Maghawir al Thawra,” a group of former Syrian military officers who generally hail from the Deir al Zour region, based on a tribal project prepared by the “New US Security Center”.

The estimated deployment of “Maghawir al Thawra” is about 300 members of around the conflict resolution area surrounding the garrison.

The US forces had trained the group since it established a presence at the base, and is currently cooperating with it in countering the “Islamic State” and humanitarian missions.

For example, “Maghawir al Thawra” intercepted drug smuggling shipments in 2018 and 2019, and also periodically provided security for aid deliveries to the Rukban camp.

Last month, it claimed it had intercepted a shipment of Captagon belonging to the Lebanese “Hezbollah” bound for Jordan and the Gulf states.

The October 20 attack wasn’t the first attack on US forces in Tanf Military Garrison.

In 2016, a Russian plane struck the base twice — once using cluster munitions and again after a US warning that coalition service members were on the scene.

4fighters from the Syrian opposition were killed.

And in April 2017, Islamic State agents attacked US soldiers after claiming to be US-backed rebels.

Just a few weeks later, an Iranian-backed militia launched a missile-laden drone at the garrison.

At about this time, elements carrying out ground operations allied with Iran began to explore the deconfliction zone.

Between May and June 2017, US and coalition forces confronted a “pro-Syrian regime” force comprising about 60 soldiers, and carried out strikes against other similar forces that entered the area.

By the summer of that year, the United States had solidified its presence with the High Mobility Artillery Launcher System.

In February 2020, the “Maghawir al Thawra” claimed that it had repelled a force of elements allied with Iran while it was trying to enter the region, according to a report published by the Military Times.

As for the future of al Tanf military garrison, Col. Daniel Magruder Jr. of the US Air Force explained in a November 2020 Brookings Institution report, the military presence in al Tanf Military Garrison supports three goals of US policy in the region:

(1) Continuing the campaign against ISIS.

(2) Undermining Iranian-backed activities along the land bridge from Iran to Lebanon.

US military officials are often reluctant to publicly acknowledge the second and third goals due to concerns about the legal justification of the US presence in Syria.

During an event organized by the Middle East Institute in July 2020, the commander of the US Central Command, General Kenneth McKenzie Jr., indicated that “the main objective of our presence in Syria is to carry out operations against ISIS.

However, his predecessor, General Joseph Votel, hinted at broader goals when testifying before Congress in 2018: “The al Tanf military garrison has the derivative value of being located within a major line of access and communication that Iran and its proxies would like to exploit…So while this isn’t our mission, we recognize the indirect impact we leave”.

In addition to undermining the land line of communications that unites Iran with “Hezbollah” and the Assad regime, the US presence in the “al Tanf military garrison” has proven to be beneficial to Israel’s “campaign between wars,” which reportedly included dozens of air missions against targets in Syria.

Some of these operations targeted Syrian bases where the Iranian “Islamic Revolutionary Guard Corps” and/or its militia proxies were expanding their presence.

In the past, these missions were carried out by flying over Lebanon, but two factors made the deconfliction zone near the garrison the less dangerous and more attractive path for Israel: the alleged concentration of air defense systems in western Syria and around Damascus, and growing Israeli concerns about Iran’s supplying its proxies with more advanced capabilities.

The garrison is said to have served Jordanian interests as well.

US soldiers and their “Maghawir al Thawra” partners have helped ensure the security of the kingdom’s distant borders with Iraq and Syria against smuggling and possible infiltration of Islamic State elements or Iranian militias.

Although Jordan has warned of a terrorist threat posed by the Rukban camp, Washington has helped mitigate that threat by erecting barriers and supporting US-trained security personnel who patrol the Syrian side of the border.

Indeed, after the former US President Trump ordered the withdrawal of all US forces from Syria in 2018, King Abdullah II personally pressured the administration to remain in the “al Tanf military garrison”.

In conclusion, recently released reports indicate that the Biden administration has completed its review of US policy toward Syria and will focus on continuing operations to defeat the “Islamic State” and providing humanitarian aid.

This is a paradigm shift from the Trump administration’s policy that focused on two other goals besides defeating the organization: implementing United Nations Security Council Resolution 2554 (i.e., enabling a political transition that would allow the Syrian government to re-establish its control over the entire country) and ensuring the exit of all foreign forces.

The Biden administration may not be interested in prioritizing the goals of the previous administration, as demonstrated by its perceived lack of interest in preventing Arab normalization with Assad or appointing a high-ranking envoy to Syria.

Nevertheless, maintaining a US foothold in the garrison and in the Northeast would benefit American interests and administration goals in key ways.

Not to mention preventing the “Islamic State” from re-configuring its ranks enough to launch new attacks in Syria or outside, the US presence on the ground represents Washington’s main source of influence in defining the future of Syria and undermining Iran’s malign activities across the border.

In short, al Tanf military garrison is an extension of America’s general policy toward Syria.

The Obama and Trump administrations believed that the benefits of a US military presence there outweighed the risks, and with good reason, although al Qaeda has been a reconnaissance target for adversaries since its founding, no US service member died there.

As long as the Biden administration remains committed to the military mission of fighting the Islamic State in Syria, a continued presence in the garrison makes sense.

Despite the resources necessary to ensure the security and supply of a remote garrison, the deployment remains relatively low-cost, high-impact, and benefits both US and regional interests.